With passenger traffic in October still down 75% compared to 2019, there is little cause for cheer for most of Europe’s airports. Meanwhile, ACI EUROPE estimates that almost 200 airports may face insolvency if things do not improve by year-end. However, despite all the gloom surrounding the business, freight tonnage and freighter movements at cargo and express-focused airports have done well, even though overall European air cargo volumes are down. Freighters and express are likely to continue to do extremely well for a number of years and now is the chance for airports to position themselves to attract and hold onto this traffic. 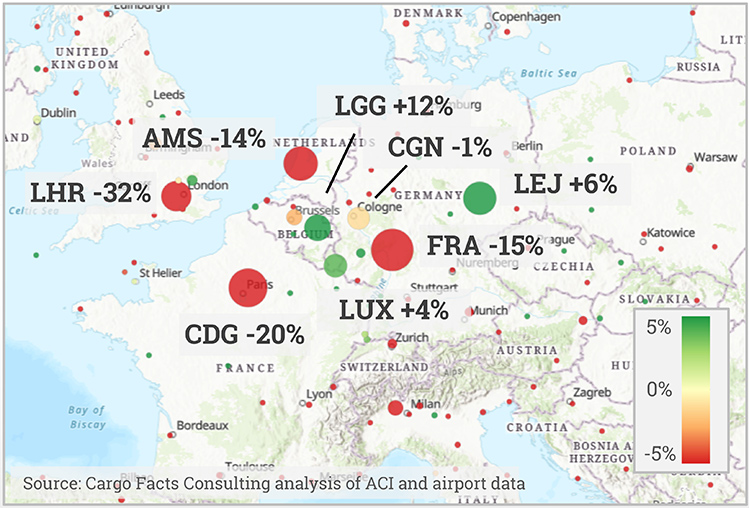 In our latest September forecast, we expect cargo traffic to be down 17% with growth of 14% in 2021, which would bring air cargo back up to about 95% of 2019 levels. For the first eight months of 2020, EU-27 airfreight exports were down by about 20% and imports by 8% (or 15% when excluding the boost from personal protective equipment and other COVID-19-related material and equipment).

On an airport level, the declines have not been evenly spread. The big combination carrier hubs London Heathrow, Amsterdam, Frankfurt, and Paris are all showing significant double-digit declines, while some airports, notably Liege, Luxembourg and Leipzig are showing healthy growth.

This growth has been coming from three areas: freighter traffic, express, and e-commerce related flying. Normally, the freighter share of air cargo traffic is around 50%, but over the coming years we expect this to be much higher – closer to 65% in 2020 and slowly returning back to 50% as passenger capacity returns over the coming years. This has naturally benefited airports that are more freighter-focused. Freighter aircraft movements at Leipzig and Cologne increased by 3% and 7%, respectively, in the first eight months of this year, according to statistics collected by Eurostat. However, airports such as Frankfurt and Amsterdam also saw all cargo flights increase by 32% and 59%, respectively, but this also includes passenger aircraft operating on cargo-only missions (also called passenger freighters). 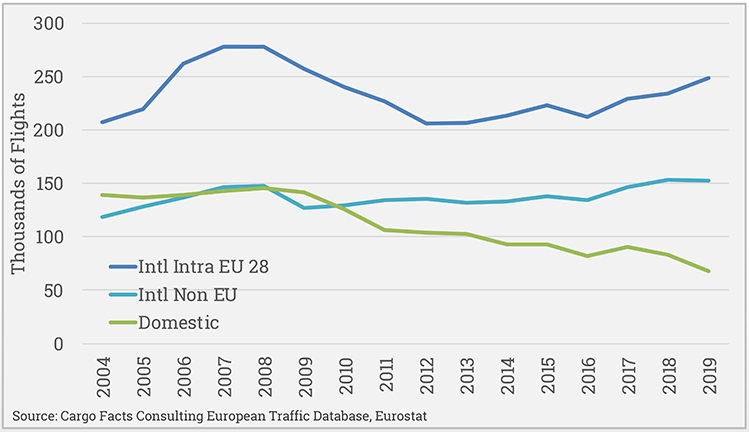 Meanwhile, the big global express carriers DHL, UPS and FedEx have all increased both intercontinental and intra-European flying – not just in 2020, but also in the preceding years.

For 2020, we expect intra-European flights to grow by about 2% and a further 3% per year for the next five years. Most of this will come from express flying, while Amazon continues to expand its dedicated European network and now operates about 30 flights per day between 12 airports in Europe using 737s. Some of these (Cologne, Leipzig, East Midlands) are express hubs, but others such as Katowice, London Southend, Belfast or Hannover are not. E-commerce related flying has put a lot of airports on the cargo map that did not exist before, particularly in the US – where Amazon operates 150 flights per day with a mix of 767 and 737s. Additional network expansion can provide further opportunities for airports looking for growth.

The same applies to intercontinental services, where particularly Liege has been successful in attracting a large number of flights dedicated to the movement of cross border e-commerce from China. By our estimates, cross-border e-commerce into the European Union has been growing three times as fast as domestic e-commerce. Building up the partnerships to attract this traffic is a time-consuming process, but can serve as a springboard for attracting other traffic as well.