On 4 November 2020, ACI EUROPE called on the European Commission to urgently adopt an ‘EU Recovery Framework for Aviation’ and for governments to provide the requisite funding to support airports – and the recovery of air traffic. The proposal builds upon fruitful cooperation with the European Commission services, acknowledging aviation has been particularly hit by the COVID-19 pandemic and airports are facing business continuity risks. Report by Bastiaan de Bruijne 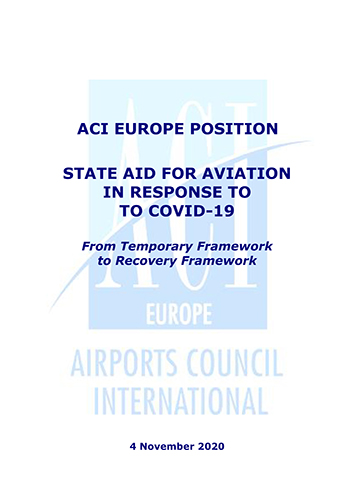 On 4 November 2020, ACI EUROPE called on the European Commission to urgently adopt an ‘EU Recovery Framework for Aviation’ and for governments to provide the requisite funding to support airports – and the recovery of air traffic.

Immediately after air traffic came to an abrupt and almost complete halt in March 2020, the European Commission acknowledged urgent action was necessary to minimise layoffs and damage in the sectors hardest hit – like aviation. The aviation sector would especially benefit from compensation for damages resulting from the travel restrictions imposed by governments. The European Commission adopted on 19 March 2020 a Temporary Framework, setting out conditions for further government support to all sectors. The Commission services have also provided regulatory measures specifically for aviation, including ‘emergency Public Service Obligations’ to support routes no longer operated as a result of the pandemic.

Governments have used the flexibility under State aid rules to provide more than €31.8 billion aid to airlines. But aid to airports has so far remained limited – reaching €840 million. ACI EUROPE has warned that close to 200 smaller airports may face insolvency if traffic does not recover soon. Europe is thus facing the potential collapse of a significant part of its air transport system. Hubs and other primary airports are seeing their debts increasing to unsustainable levels.

The Temporary Framework and regulatory measures would have expired by 31 December 2020. But all forecasts (ACI EUROPE, EUROCONTROL, IATA) point out that a return to 2019 levels of air traffic is not expected before 2024 or even 2025. This means the aviation sector requires State aid measures with a longer time horizon.

While the European Commission has extended its Temporary Framework enabling EU States to support the companies affected by the pandemic until June 2021, this is insufficient to address the devastating and lasting impact on aviation and airports in particular. According to ACI EUROPE, the Temporary Framework should be extended to the end of 2021 and supplemented by a Recovery Framework for Aviation including the following key measures:

The Position Paper was submitted by ACI EUROPE President, Jost Lammers, to the European Commissioners for Competition and Aviation. The paper is available at: https://www.aci-europe.org/component/attachments/attachments.html?id=1202&task=download