Edinburgh Airport is normally Scotland’s busiest. It experienced a record year in 2019, with 3.1% growth to 14.7 million passengers. Typically, around 35,000-50,000 passengers per day would be travelling through the airport in the summer months, but right now that figure is only anywhere between 200-300, so demand is down by around 99%.

“It’s incredible,” says Gordon Dewar, CEO Edinburgh Airport. “COVID-19 has had a huge impact and I think that will be the same for any other airport across the UK, Europe and the rest of the world. I think the numbers are so big that it’s difficult for people to really quantify the impact. The analogy I’ve been using is that this will be like a time machine when it comes to passenger numbers. We’re probably going back to levels not seen for around 30 years, but it will rebound much quicker. It’s how quick that is the question at the moment, and no-one quite knows what that recovery will look like.”

Edinburgh Airport has announced a new campaign – ‘let’s all flysafe’ – as well as a range of measures to help passengers and staff prepare for the return of travel.

“Quite simply it’s to provide passengers with confidence and reassurance as they return to aviation,” explains Dewar. “We know that COVID-19 has had a huge impact on many ways of life, but it’s also impacted on how we live our life, so we wanted to do something that demonstrates to passengers that we’ve thought about them and made improvements to our operation to alleviate any concerns they may have. Aviation has become a focal point during this pandemic and I think some of the focus has been overly concentrated on international travel, but the reality is all industries have faced and will face challenges. But we’ve responded to those challenges and are ready for aviation’s return.” 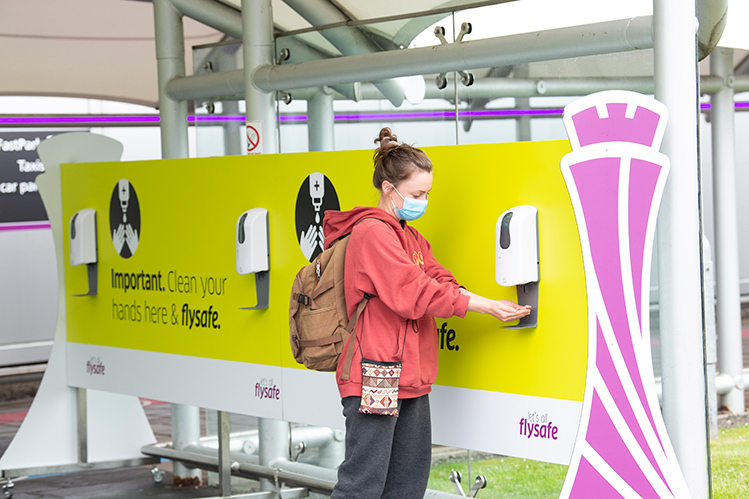 Passengers arriving at all points of the airport will have to follow a sky-blue line to take them into the check-in hall and, on this route, they’ll have to sanitise their hands before they enter the building.

The airport is also acutely aware of the need to future-proof these changes and has identified a set of measures with the flexibility to adapt to increased demand or changes in health guidance.

When identifying the vital messages to convey in the ‘let’s all flysafe’ campaign, Edinburgh Airport looked at the feedback it had received from passengers through email, social media and face-to-face conversations. “We spoke to a wide range of stakeholders, including travel trade, airlines, other companies and government, to understand their feelings and perceptions,” says Dewar. “We also looked at the extensive media coverage locally, nationally and internationally to get as good an understanding as possible of the current and future issues.”

Quite quickly, the airport knew there were key areas to focus on, such as the importance of hand cleansing, self-responsibility for our own health, and the need to work together to ensure we are all safe. “We wanted a campaign that made clear we all had a part to play, which is why we went with ‘let’s all flysafe’ as it is our social contract with passengers – we’ll look after you as much as we can if you do your part too,” Dewar explains. “We’re aware of the international profile that Edinburgh has, and we have a number of international passengers passing through the airport, so we knew we had to make the campaign as pictorial as possible to get over that language barrier and make it easy to understand.”

Three different colours have been specifically selected for the campaign – all are outwith the airport’s traditional brand colours. The sky-blue lines will lead all passengers into the terminal, while the maroon-red lines will lead passengers out of the terminal. The third colour is lime green and is used on behavioural messaging, so where people are asked to clean their hands, be patient, and get ready for check-in and security.

“The colours used enable people who are colour-blind to differentiate between the different messaging, so the campaign is accessible, and we’ll continue to make improvements where we can,” Dewar adds. 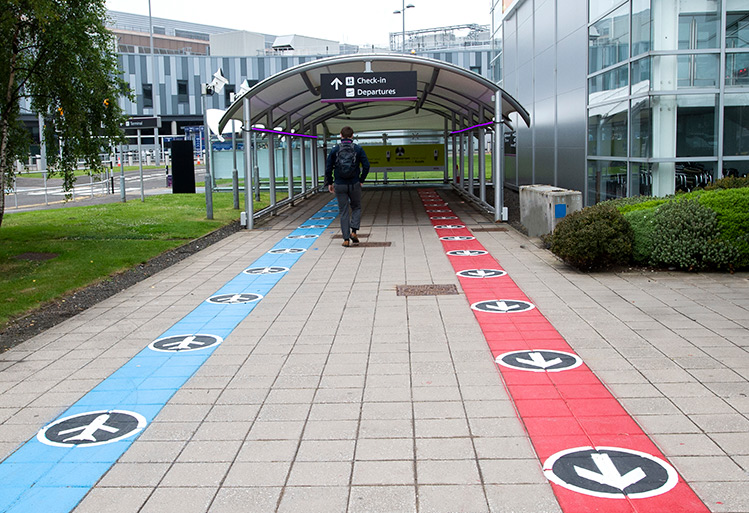 Three different colours have been specifically selected for Edinburgh Airport’s ‘let’s all flysafe’ campaign. The sky-blue lines will lead all passengers into the terminal, while the maroon-red lines will lead passengers out of the terminal. The third colour is lime green and is used on behavioural messaging.

Edinburgh Airport has introduced the same important safety measures that other airports and sectors have, such as protective screens at check-in, security and arrivals, encouraging the use of face coverings, and enhanced cleaning schedules.

“But we’ve gone over and above that too,” Dewar emphasises. “The biggest change we’ve made is the introduction of one-way colour-coded systems in and out of the airport. Passengers arriving at all points of the airport will have to follow a sky-blue line to take them into the check-in hall and, on this route, they’ll have to sanitise their hands before they enter the building, so we’re taking additional precautions. Exiting/arriving passengers will follow a maroon line out of the terminal and will be separated from those looking to head out of Edinburgh. It reduces cross-over and potential contamination of passengers and keeps an orderly flow to things – and it might even be something we keep in place going forward.”

Thermal imaging technology is also being trialled for departing passengers. “We’re an airport that’s always embraced technology and use it in almost every aspect of our operations, so we’re trialling this technology now to ensure we are prepared for its introduction if and when that comes,” says Dewar. 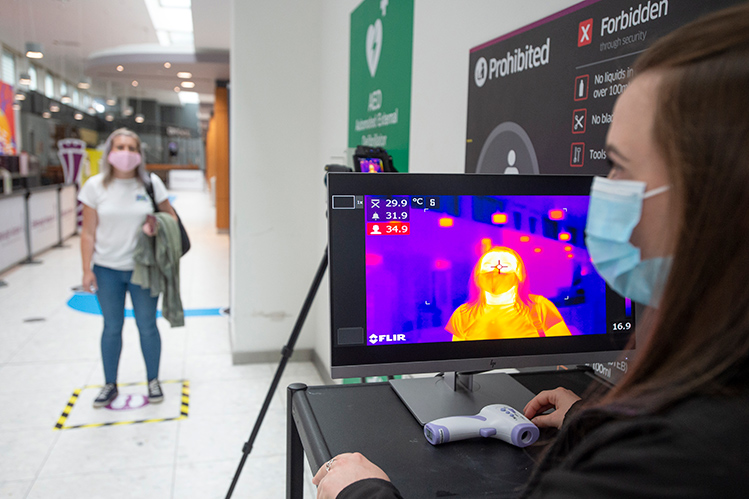 Thermal imaging technology is being trialled for departing passengers. “We’re an airport that’s always embraced technology and use it in almost every aspect of our operations, so we’re trialling this technology now to ensure we are prepared for its introduction if and when that comes,” says Gordon Dewar, CEO Edinburgh Airport.

A partnership between airport and passenger

The airport’s Operations team has put great thought into its COVID-19 response and delivered a system that works and suits all regulations. Dewar believes that what pulls it all together is the tone of voice and messaging used. The emphasis is on a partnership between airport and passenger, because COVID-19 is something we’ve all had to and will continue to deal with.

“The inclusive nature of the campaign builds that social contract between us – we’ll do all that we can do, you do all that you can do and together we’ll all ‘flysafe’. Ultimately, I think we can all learn from each other and I think as an industry we’re already really good at that. Of course, we are competitors but we’re also working to help aviation improve and excel, and that knowledge-sharing piece is crucial to that.”