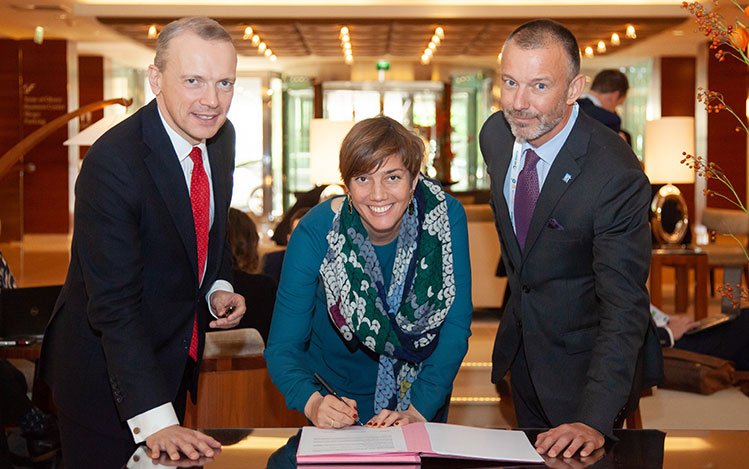 On 2 October 2019, ACI EUROPE signed a cooperation agreement with the RE-Source Platform, the European alliance of stakeholders for corporate renewable energy sourcing. This partnership aims at accelerating the clean energy transition at Europe’s airports, helping them to reach NetZero by 2050 for carbon emissions under their control. Report by Agata Lyznik.

Earlier this year, Europe’s airports raised the stakes of their climate action in the face of the growing Climate Emergency. As part of their call on all aviation industry stakeholders to chart a vision towards a net zero carbon air transport system, Europe’s airports committed to reach Net Zero carbon emissions from the sources under their control at the latest by 2050. This new bold commitment is aligned with the ambition of the newly designated European Commission, according to which Europe should become the first climate neutral continent in the world, thus responding to the latest climate science. The commitment also carries a call on the European Union and national governments to accelerate the clean energy transition and facilitate airports’ access to zero emissions energy under competitive conditions.

ACI EUROPE, who shepherded the industry-wide character of this commitment, is determined to activate all the necessary partnerships to facilitate the achievement of this new ambition. Given the nature of emissions that can occur at the airport site, one of the key pieces of the Net Zero puzzle is full decarbonisation of the airports’ energy supply. Although the installation of renewable energy infrastructure such as photo-voltaic parks and wind turbines is definitely on the rise at airports, reaching 100% clean energy supply throughout the continent can only be achieved through key partnerships with the energy industry.

With this in mind, ACI EUROPE decided to join forces with the RE-Source Platform, the European alliance of stakeholders for corporate renewable energy sourcing, and signed the new partnership on the 2nd October 2019, at the annual RE-Source event taking place in Amsterdam. On its grounds, the European airport operators will be able to tap into the vast network connecting buyers and sellers of renewable energy and benefit from the latest tools and information to help them drive their transition to clean energy sourcing.

The RE-Source platform pools resources and coordinates activities to promote a better framework for corporate energy sourcing both at the EU and national levels. Founded by associations representing the European renewable energy sector – SolarPower Europe and WindEurope, RE100 (led by The Climate Group in partnership with CDP) and the World Business Council for Sustainable Development (WBCSD), RE-Source is focused on supporting the development and deployment of renewable energy sources by promoting new business models and improving policies & regulations.

The involvement of the airport industry in RE-Source is a win-win scenario, in which the weight of the continent’s airports’ economic force will add to the building momentum for corporate energy sourcing, which will help meeting Europe’s target to reach 32% of its energy from renewables by 2030 and in turn empower airports to deliver on their Net Zero commitment.

The Resolution formally committing the European airport industry to become net zero for carbon emissions under its control by 2050 was launched on the 26th June 2019, at the 29th ACI EUROPE Annual Congress & General Assembly in Cyprus. As of November 2019, the pledge is further backed up so far by 204 airports run by 47 airport operators across 25 European countries – with each of them individually committing to the same objective. This marks a step change in the climate action of the airport industry as the Net Zero concept does not allow for carbon offsetting. Based on Europe’s airports current traffic volumes (2.34 billion passengers welcomed in 2018) and estimated carbon footprint, this net zero commitment will eliminate a total of 3.46 million tons of annual CO2 emissions as of 2050.
Tweet