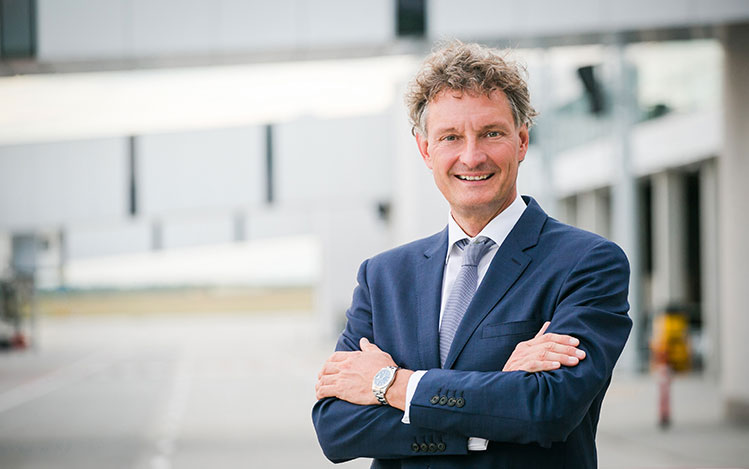 Dr. Rolf Schnitzler, CEO Budapest Airport: “I have known the ‘matrix’ of aviation and airport operation for nearly 15 years now, and have followed the development of Budapest Airport for more than 10 years.”

Budapest is a beautiful, culturally-diverse city, colloquially known as the Pearl of the Danube. The Economist recently published an updated list of the world’s most liveable cities, placing Budapest top in Eastern Europe, and it has become an attractive destination for tourists. Hungary’s strong economic growth (+5% in 2018) is also increasing the propensity for air travel. Impressively, passenger traffic has increased by 50% over the last three years and could exceed 16 million this year.

Leading Budapest Airport’s continued growth is its new CEO Dr. Rolf Schnitzler, who took the helm in August 2019 after 14 years of experience in corporate management at AviAlliance. He has also been a member and Chairman of the Supervisory Board of Budapest Airport since 2011.

In addition to his experience with AviAlliance, Schnitzler holds a Doctorate in Law with professional experience at Freshfields, HOCHTIEF, the German American Chamber of Commerce, and Deutsche Bank.

“I have known the ‘matrix’ of aviation and airport operation for nearly 15 years now, and have followed the development of Budapest Airport for more than 10 years,” he begins. “My legal and financial educational background, supplemented by business experience, clearly help me to take differentiated views. As Chairman of the Supervisory Board and an AviAlliance executive, I had particular insight into several airports that the group operates, and I have looked at many other airports around the globe that we considered investing in. Irrespective of this, being the CEO of an airport is a serious challenge, especially in Budapest, where we have large-scale developments ahead of us.”

Alongside the initial priorities of getting to know his team, business partners and stakeholders, Schnitzler highlights three focus points: development, passenger experience and sustainability.

“In four consecutive years from 2015 to 2018, Budapest Airport achieved double-digit passenger growth, and this trend is expected to continue,” he says. “This means that, firstly, we have to serve the increased passenger traffic, and, secondly, the increased needs as well. As an airport, we cannot afford to ignore international megatrends; every service provider must strive to provide a ‘user experience’, which in our case is passenger satisfaction. So, the next few years will not just be about the spectacular expansion of infrastructure, but also about the strengthening of the passenger focus. Regarding sustainability, well, the thing is, I was born with a ‘green heart’. Renewable energy, reduction of emissions and overall environmentally-friendly operation – there is no question that we have to operate every day with that mindset. Budapest was the first airport in Eastern Europe to achieve carbon neutrality. That’s a big achievement and, at the same time, an incentive to again become the frontrunner in getting to the next levels.”

Dr. Rolf Schnitzler (48) became the new CEO of Budapest Airport in August 2019, following more than 14 years of experience in corporate management at AviAlliance. He has also been a member and Chairman of the Supervisory Board of Budapest Airport since 2011, and has become intensively acquainted with the airport through the provision of support and legal advice on numerous important projects.
Schnitzler holds a Doctorate in Law with professional experience at Freshfields, HOCHTIEF, the German American Chamber of Commerce, and Deutsche Bank.

A series of infrastructure investments totalling €600 million are planned up to 2024. “If our growth story continues – and I have no doubt that it will – we will be coming to the limits of our capacity with the current infrastructure in the not too distant future,” Schnitzler explains. “The developments must keep pace with the passenger growth going forward, and appropriately-sized infrastructure is one of the most important elements of a positive passenger experience. I cannot say much about specific plans for the moment, as we are still discussing internally, but Budapest Airport will have a new ‘face’ in every sense.”

As part of this firm focus on the passenger experience, the trial operation of self-service baggage drop-off counters began in August. Schnitzler reports very positive feedback. “The baggage check-in process is much faster and more efficient; the process itself is not more than 1-2 minutes. Moreover, passengers increasingly like to take care of things at the airport before departure themselves, so automation is a key issue.”

Sustainability is also a priority during the development of the airport, which was recognised at Level 3+ Neutrality of ACI’s Airport Carbon Accreditation last year. “We would like to create long-term value and set an example to follow for the neighbouring community, passengers and partners alike,” says Schnitzler. “We’ve reduced carbon dioxide emissions per passenger by 49% over the last five years, and drinking water usage is down by 30%. This is great progress in itself, especially as we achieved this reduction during a drastic increase in passenger traffic.”

Furthermore, Budapest Airport has signed up to ACI EUROPE’s NetZero2050 pledge, committing to net zero by 2050 for the carbon emissions under its control. “We will achieve this with a new sustainability strategy, which includes, for example, making waste management more environmentally-friendly, rationalising energy consumption, and supporting electro-mobility,” Schnitzler explains. “Cooperation has a key role to play here as well; as part of our GreenAirport programme, we are working with other organisations operating at the airport on implementing sustainability criteria.”

Budapest Airport has an award-winning route development strategy, being named overall winner at the recent World Routes Awards, with 34 new routes announced or started so far in 2019. “We are so proud of this award – it is comparable to the Olympics in sports or the Oscars in the film industry,” Schnitzler enthuses.

Flights are now available to 142 destinations in 47 countries from Budapest, including Shanghai, Seoul, New York, Philadelphia and Chicago.

“I think we can remain competitive in the Vienna-Prague-Budapest triangle if we are able to offer new destinations which make it worthwhile to choose Budapest and Budapest Airport,” says Schnitzler.

While there aren’t many white spots on Budapest’s European route map, the airport does see untapped potential, including for increased frequency on many existing routes. “However, route development is not just a race, but also teamwork, where you can achieve really great success if the airport, the airlines, and the government all work together,” Schnitzler adds.

The airport works closely with its airline partners, helping them understand the local market and demand, while designing tailor-made products. One example is the creation of hub services, for both full-service and low-cost carriers, despite Hungary not having a flag carrier.

Looking ahead, Schnitzler explains that the next big thing is the further development of Budapest Airport’s infrastructure, considerably increasing the terminal capacities to meet continued strong traffic growth.

“This goes hand-in-hand with increasing connectivity by attracting even more new routes – and of course all this with the passenger in mind. The passenger experience and customer satisfaction are really the top priority for me. At the same time, Budapest’s role as a hub needs to be developed further, and we are also facing numerous challenges in sustainability. An airport never stops; we are making continuous progress.”