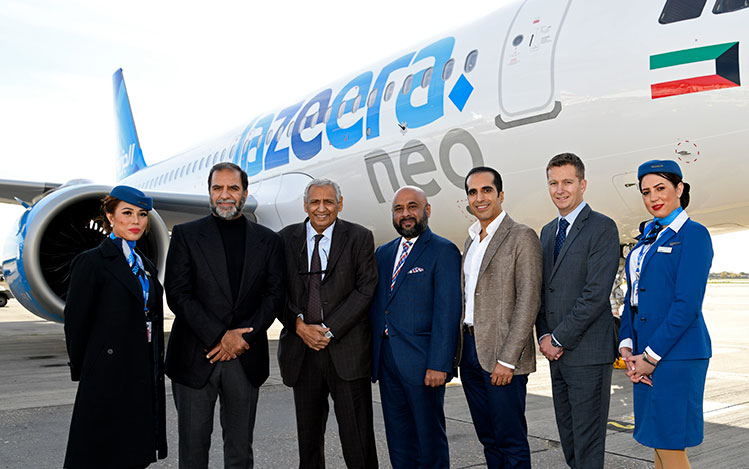 The Middle East is awash with government-owned airlines with profit as a secondary – or lower – consideration. For private airlines, this makes the going even tougher than usual.

Airport Business’ James Pearson met up with Rohit Ramachandran, CEO of Kuwait’s privately-run Jazeera Airways, to discuss the airline’s development, new routes – including London – and what makes it different.

Against all of this is the environment in which it exists. “We have always had to compete on an unlevel playing field,” says Ramachandran. “We aren’t like the government-owned big boys who don’t have P&L pressure.” It is against this that everything that it is doing can be framed.

Following years of almost non-existent growth, Jazeera Airways has grown strongly in the past year. It has nearly doubled its seats in 2019 versus 2017, with an additional 1.4 million. This growth coincided with the arrival of Ramachandran in February 2017, who previously had senior roles at Air Arabia for 12 years.

“Our expansion is giving customers access to new destinations through direct or short one-stop flights across the Middle East, Europe and Asia,” says Ramachandran. This is shown through new routes beginning in Q4 2019: Kathmandu (Nepal); Karachi (Pakistan); Chittagong (Bangladesh); Al Ain (UAE); and Dammam and Abha (both in Saudi Arabia).

These six will join two new routes that have just begun: Osh, Kyrgyzstan, and – most significantly – London. Three new Airbus A320neos will arrive by the end of 2019 to enable this expansion, taking the airline’s total to 13.

On 27 October, Jazeera started a daily service to London Gatwick using a newly-delivered A320neo. This variant, Ramachandran says, will have an 18% lower fuel CASK (cost per available seat kilometre) than its ceos. This is, of course, counterbalanced by much higher ownership costs.

Since 2015, the London-Kuwait market has grown steadily to nearly 400,000 point-to-point passengers – with a strong CAGR of 7%. Interestingly, the UK CAA shows that 81% of the market is for VFR and leisure. “Kuwait has strong links with the UK… there are lots of Kuwaiti students there,” says Ramachandran.

It is these price-conscious travellers, those flying to Saudi Arabia for religious purposes, and those travelling to Delhi and Dubai, among others, that Jazeera targets. “We expect our average economy fare to be 25% less than existing non-stops to Kuwait,” says Ramachandran.

Jazeera has three classes on Kuwait-London: economy, premium economy and a simple business class (akin to business class within Europe). “Our business return will be less than half existing fares,” says Ramachandran. “It’ll average around £850 return.”

Its new premium class – involving a guaranteed free middle seat and an extra inch of legroom – was borne out of necessity. “We would have a payload restriction to London, so we decided to monetise this disadvantage.” This multi-cabin layout leads to a low seat density of just 162. Further proof that it isn’t, despite Ramachandran’s contention, a low-cost carrier. It is very much a hybrid.

Ramachandran is clear: London is an experiment. “We want to see its performance and how it matures before serving anywhere else in Europe.”

If London performs to expectations, Ramachandran expects Manchester to be its next Western European destination. Manchester is Kuwait’s largest unserved market in Europe. OAG Traffic Analyser shows 30,000 indirect passengers and an average fare of USD$279 in the year to August 2019. Combined with one-stops to Saudi Arabia, India and the UAE, it’ll be worth full analysis.

Saudi Arabia will become a fundamental part of Jazeera Airways. “We are far smaller there than we should be by now. We expect to serve nine cities there in the next two years.” Alongside existing Riyadh and Jeddah, and seasonally to Medinah and Taif, Dammam and Abha are coming.

Like many airlines, Jazeera is hampered by bilateral restrictions. “India has been a sticking point for a long time,” Ramachandran states. It’s not hard to see why. Despite one million Indians in Kuwait, the last ASA was signed in 2007 and is limited to 12,000 seats. As such, 55% of people connect, aided by myriad hubs en-route that add little distance. Pakistan is like India in terms of bilateral constraints, “but it’s not as extreme.” Yet Ramachandran remains hopeful. “Bilateral renegotiation is long overdue, and they’re being reviewed in the next couple of months.” This will play a crucial role in whether Jazeera expands further into South Asia as Ramachandran expects.

Small but strong – and different

In Q3 2019, Jazeera Airways achieved a load factor of 80.7%, below the global average. It carried 703,000 passengers (+14% YOY), with traffic growing faster than yields (+5%; USD$160). The extra traffic volume, and emphasis on ancillary streams, saw this source grow by nearly 60% YOY. It achieved net profit of USD$25 million in this quarter, up 38%. “Despite being small, we pay USD$20-30 million in dividends per year and we have zero debt,” says Ramachandran. Not many in the Middle East can say that.

Not a terminal problem

Nor can many – any – say they have their own terminal. “It’s a shopping mall business,” Ramachandran explains. “All revenue goes straight to our bottom line.” Asked about the reason for its own terminal, Ramachandran was clear. “Kuwait’s normal terminal is no good. We want to control passengers’ experiences. Immigration now takes 90 seconds, and it’s just 15 minutes from landside to the aircraft.” Jazeera is beginning to see interest in its terminal from other airlines, potentially offering another revenue stream.

Despite the unlevel playing field, Jazeera Airways seems to be finding innovative ways to succeed, even if they do raise eyebrows at times.