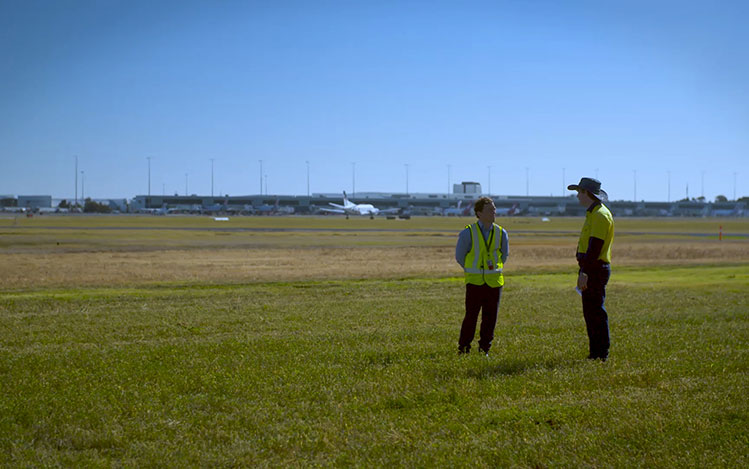 The South Australian Water Corporation found that the bare ground of the unirrigated area had a surface temperature 6C higher than the irrigated area, demonstrating that bare unirrigated open space actually contributes to the airport’s heat island effect.

The South Australian Water Corporation (SA Water), in partnership with Adelaide Airport, has conducted a three-year trial involving irrigation and cultivation of airside land at Adelaide Airport using stormwater. The results have shown the lowering of air temperatures within and around the irrigated areas which, with full implementation, could lead to a reduction in the fuel needed for take-off on hot days, as well as other payload, range and obvious environmental benefits. SA Water simultaneously believes the practice is both sustainable from a water conservation perspective due to the use of captured stormwater, and even produces net revenue gains from the resulting agricultural produce.

In the initial trials, Adelaide Airport irrigated a four-hectare parcel of the airside area. A crop of lucerne (an animal feed also known as alfalfa) was planted in the irrigation area to demonstrate the ability to grow commercial crops that would both cool the air and provide a source of revenue.

The main requirements for the trial site were:

Due to the potential risk of attracting birds, the irrigation system was initially only operated during Adelaide Airport’s night-time curfew period (23:00-06:00), although later irrigation was extended to any time during non-daylight hours. Irrigation then occurred between two to three times per week, with a total volume of around 20 million litres of captured stormwater being applied each year, or five million litres per hectare. Around 40 temperature sensors were placed around the irrigation area, along with five soil moisture probes to inform the irrigation requirements.

During the two years of operation, from December 2015 to April 2017 there was an average temperature difference of 2.4C during the first summer period, and 2.1 degrees during the second, between the irrigated and unirrigated areas, with most warm days having a difference of around 3C or more. The irrigation only occurred on two or three nights per week, however these reductions in air temperature were persistent over the following few days. SA Water also found that the bare ground of the unirrigated area had a surface temperature 6C higher than the irrigated area, demonstrating that bare unirrigated open space actually contributes to the airport’s heat island effect.

SA Water expects that modification of the irrigation methods, and subsequent ability to apply more recycled water to the irrigation area, will show an even greater differential between the irrigated and unirrigated areas.

Realistically, not all of the benefits were claimed to be significant, and others were not possible to quantify due to lack of data. However, it is clear that irrigation and cultivation at Adelaide Airport has shown a significant reduction in air temperature within the irrigation area. Besides application in the airport environment, many benefits can be derived from irrigation of other open spaces, in particular public open spaces such as local parks and sports fields – and the development of best practice by others will no doubt feed back to even more benefits for this method of air temperature reduction at both airports and other open spaces.