Air passenger traffic growth in China has averaged over 12% year-on-year growth for the last ten years, and the three biggest Chinese airports have seen growth rates as high as 16% in some years. This dramatic growth has put continual pressure on new and existing aviation infrastructure, both in the air and on the ground. Despite a major and continuing investment programme of 54.9 billion RMB ($8.2 billion) at Pudong Airport (first phase 15.1 billion RMB, 2nd phase 19.7 billion RMB, 3rd phase 20.1 billion RMB) operational delays increased. This article looks at the ways that this challenge of escalating delays was met by the airport and its stakeholders. By Joanna Lu, Head of Consultancy Asia, Ascend by Cirium 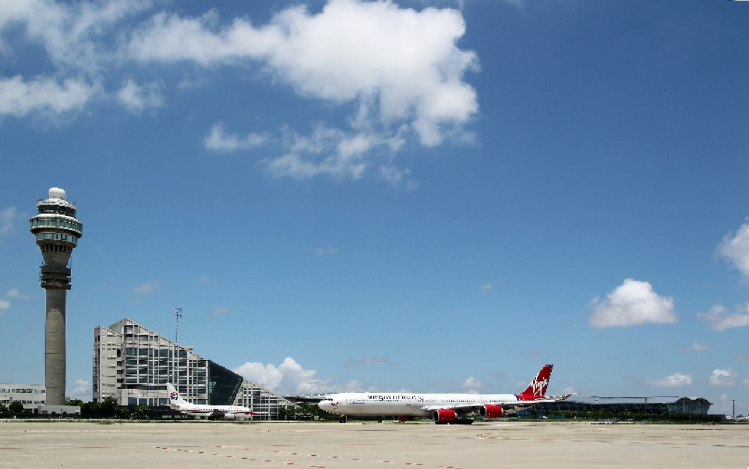 Departure delay statistics can be a brutal reminder of how hard it is to synchronise infrastructure and traffic growth. Our 2017 FlightStats statistics show that of the world’s 100 busiest airports, the seven airports that suffered the longest delays were in China, including the country’s major hubs in Beijing, Shanghai and Guangzhou. The average on-time performance (within 15 minutes of scheduled departure time) for the major Asian hubs in 2017 was 84.1%. The stand out performer was Tokyo Haneda International Airport, which despite being one of the busiest airports in the world, maintained an on-time performance of 90.8%. However, Beijing reached a mere 63.1%, Pudong only reached 56.2% and Hongqiao 53.2%. The performance during the summer typhoon period was even worse at Shanghai’s airports. 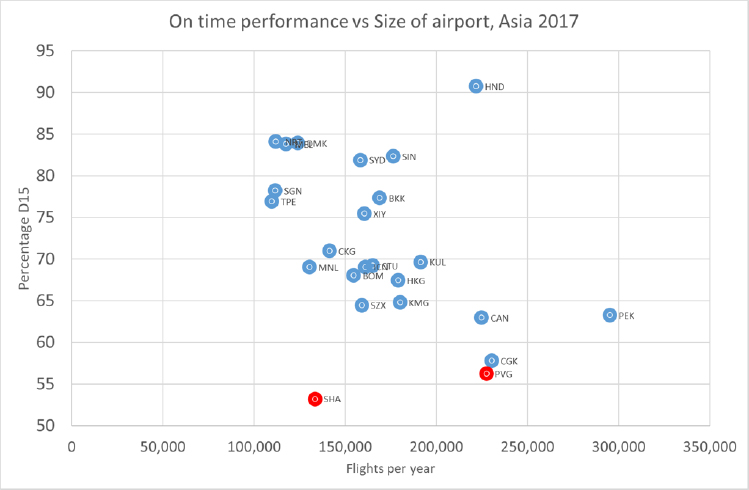 Airport delays arise from multiple causes. Many are the result of the combined capacity challenges and restricted access to air space for commercial services in China. Weather is also a relevant factor, given the variety of micro-climates across China and their seasonal variance. But a key reason for the decline in aviation on-time performance in China can be summarised as a mismatch between the dramatic growth of air travel needs and the level of industry collaboration. In other words, it was proving difficult for the multiple parties involved to collaborate effectively to solve the problems that affected the whole industry’s future.

The CAAC (Civil Aviation Administration of China) adopted a number of policies to improve flight punctuality. However, these were mainly based on penalties. The published 2017 “Flight Regularity Evaluation Criteria and Restrictions” prescribes separate sets of flight regularity evaluation criteria and restrictions for the three major types of entities involved in civil aviation operations, i.e. airlines, airports and ATM departments. As Pudong and Hongqiao failed to meet punctuality requirements, their applications for extra flights, charter flights and new routes were suspended until very recently. As a result of this, the two airports experienced limited growth in total flight operations during the last two years.

The road to improvement: Identifying priorities

The key focus for the two Shanghai airports was to improve on-time performance rather than anything else. Following input from different stakeholders it was agreed to find out how to foster further network growth at a congested hub. A study was made by Ascend to map out the ideal or expected route network structure to best serve the airport’s strategic role. This then led to a ‘gap analysis’, and the creation of further objectives to review the existing flight schedules and aircraft usage, in combination with a review of the delay patterns. Suggestions for process improvements became a lot clearer after this analysis, and these could be tested against the extensive operational analysis results.

It was recognised that concerted action cannot be undertaken by the airport alone. Shanghai Airport Authority therefore established a cooperative command platform for improving flight operations. Under the leadership of the Airport Community Operational Committee, the Collaborative Operation Management Committee and the On-site Collaborative Command Center were established at both airports of Shanghai. The CAAC East China Administration, the East China Air Traffic Control Bureau, the base airlines and the airport were jointly stationed together to improve the on-site coordination efficiency and emergency handling capacity.

Further work is also being done by the airport operator to work with airlines and air traffic control to optimise the aircraft taxi routes, and to redesign and reduce the bottlenecks of taxi lanes to ease operational conflicts. Of course, these actions also help the sustainability efforts of the airport, as reduced delays and taxiing improve operational efficiency and reduce the overall fuel burn.

The application of new technologies can also improve the airport’s operational efficiency in the long run. Pudong Airport actively promotes the use of the Class IIIA instrument landing system on its second runway. It is now able to handle aircraft landing in ultra-low visibility on these runways to reduce the flight delay impact from weather events. 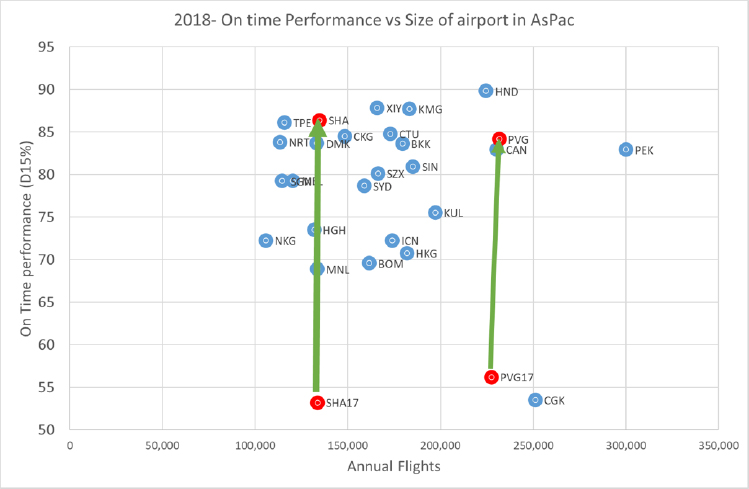 These combined and consultative efforts by the main airport stakeholders, based on reliable and consistent analysis tools, contributed to a dramatic delay performance improvement for both Pudong and Hongqiao. In 2018, the average on-time performance at Pudong and Hongqiao improved to 84% and 86% respectively. This has continued in 2019, rising to 89% and 90% year-to-date performance, as of 21 March. The success shows the importance of creating stakeholder synergy where market information is analysed effectively, and decisions based on that are agreed together. However, as growth continues there is an ongoing need to monitor and plan for further improvements which will support the airport sustainability strategy of balancing further growth with operational efficiency.