An interview with Nicolas Notebaert, CEO of VINCI Concessions, President of VINCI Airports. By Ross Falconer

Traffic rose 9.7% in Q1 2019, outperforming average growth in French airports. Among the highlights fuelling growth were the opening of a new route to Tel Aviv by easyJet, Aeroflot’s doubling of frequencies on its Moscow route, and the strong performance of domestic traffic.

“Driven by VINCI Airports’ recognised marketing expertise and close cooperation with virtually all airlines, traffic at Lyon Airport actually increased by 27% over the last three years, to reach 11 million passengers in 2018, driven by the opening of 52 new routes and the arrival of 11 new airlines, including Air Canada, Volotea, Wizz Air, Finnair, and Aeroflot,” says Nicolas Notebaert, CEO of VINCI Concessions, President of VINCI Airports. “The airport now offers direct flights to 131 destinations.”

Notebaert highlights a number of innovations designed to promote traffic expansion, including:

• “Definition of a calculation model to enable airlines to assess opportunities to open new routes.”

• “Partnership with Kiwi to develop ‘self-connect’ traffic, which made Lyon Airport the first 100% integrated airport for bus-rail-air connections in the world.”

• Lyon-Saint Exupéry Airport has fully implemented Airport Collaborative Decision Making (A-CDM), which makes it possible for all airport partners (air navigation services, airlines, ground handling companies and the airport operator) to take the most effective operational decisions in a collaborative way in order to optimise operations at the airport. 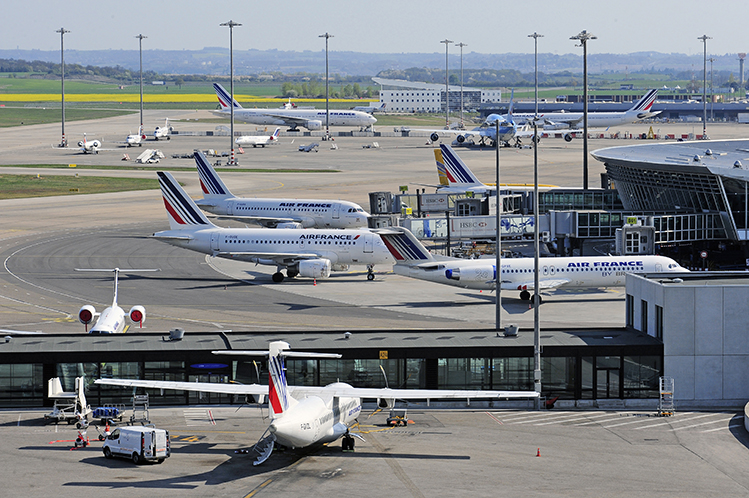 “Lyon-Saint Exupéry, the largest French airport in the network, is an excellent example of this strategy,” says Tanguy Bertolus, CEO Lyon-Saint Exupéry Airport. “The strong innovation culture prevailing at Lyon Airport gives customers a preview of the airport of the future. In 2019, for the first time in the world, the airport rolled out Stanley Robotics’ outdoor valet parking on a large-scale. In 2018, it also launched a service in partnership with the start-up Eelway to collect the luggage of arriving passengers and deliver it to their home or hotel.”

Other projects include implementation of state-of-the-art security lines, which have reduced average security wait time from 20 minutes in 2018 to 7 minutes in 2019. Notebaert adds that these have lowered security costs over the long-term, improving the airport’s competitiveness. “Passport control has been speeded up by a factor of 5 following installation of 20 automated smart gates using facial recognition.”

The customer-centric approach also includes better interaction with travellers. Throughout the overall passenger journey, the airport has implemented a “Web to Wings” digital experience, with 8 million visits to the Lyon Airport website in 2018. Here, customers can find travel inspiration, a chatbot (also set up on Facebook), and car park reservation with a yield management system designed to offer the best price and optimise revenue and capacity.

From this summer, new ephemeral shops will be offered and six new food service points will be opened by the end of the year. Work on the new 120-room MOXY hotel in the heart of the terminals has begun for an opening in 2020. At the end of the year, a new concept shop based on techno-computer vision will enable passengers to scan their credit card, to select their product and then to leave, being automatically charged. This store will be a first in an airport in Europe.

The rollout of an e-commerce marketplace, selling services from both the airport and its partners, generated €15 million in annual revenue, while the Shop & Collect service enables passengers to collect their purchases at the airport on the return leg of their trip.

Notebaert adds that Lyon-Saint Exupéry has created a dedicated ‘Datalab’ team, which analyses passenger data to optimise the customer experience and expand sales. 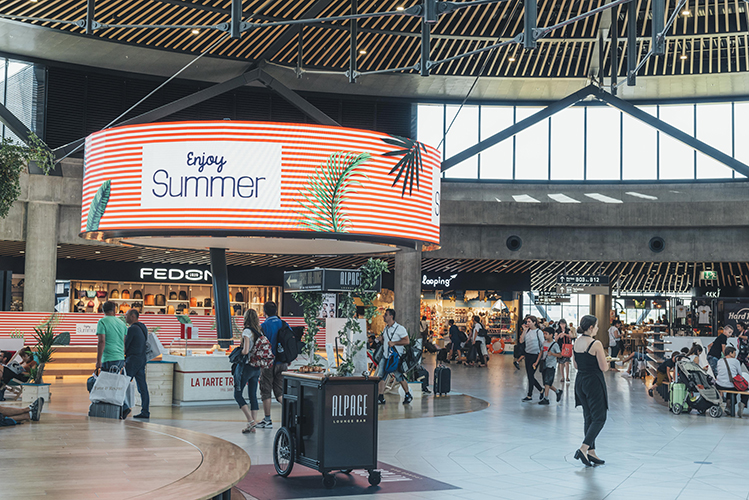 The rollout of Lyon-Saint Exupéry’s e-commerce marketplace, selling services from both the airport and its partners, generated €15 million in annual revenue, while the Shop & Collect service enables passengers to collect their purchases at the airport on the return leg of their trip.

The airport’s technological innovations are mirrored by a progressive approach to the environment. Since 2011, 100% of the electricity consumed at Lyon-Saint Exupéry has come from renewable sources – a key factor in it achieving Level 3+ Neutrality of ACI’s Airport Carbon Accreditation.

Other environmental initiatives include:

• All the shuttles on the tarmac are fed with biogas.

• The fast Rhônexpress rail link between Lyon city centre and the airport represents only 4g of CO2 per kilometre per passenger, which is very little compared to individual vehicles (200g CO2).

Lyon-Saint Exupéry’s initiatives include leadership of a ‘Carbon Club’ dedicated to involving all airport partners and subcontractors in the reduction of greenhouse gas emissions, creation of a noise observatory to improve noise abatement measures, the launch of an 85-hectare biotope conservation area, funding of air quality measurement campaigns, groundwater management in partnership with the local authorities, and regular consultations with local resident associations and local elected officials.

Looking ahead, Notebaert explains that innovation and quality of service will remain at the heart of the airport’s challenges. “In 2019, Lyon-Saint Exupéry Airport will become one of the centres of excellence for VINCI Airports’ innovation programme, in order to share its expertise, skills and services with our entire airport network.”