The Hamburg Airport focus remains firmly on the traveller in 2019. While last year was a challenging one for the airport, with a slight decrease in passenger numbers, it still served over 17 million and reports a consistently high level of satisfaction.

“We never stand still in our efforts to offer passengers an optimal travel experience with the greatest possible comfort,” begins Michael Eggenschwiler, CEO Hamburg Airport. “We have invested heavily in passenger comfort, with qualified personnel onsite and with the latest technology bringing genuine added value for travellers.” 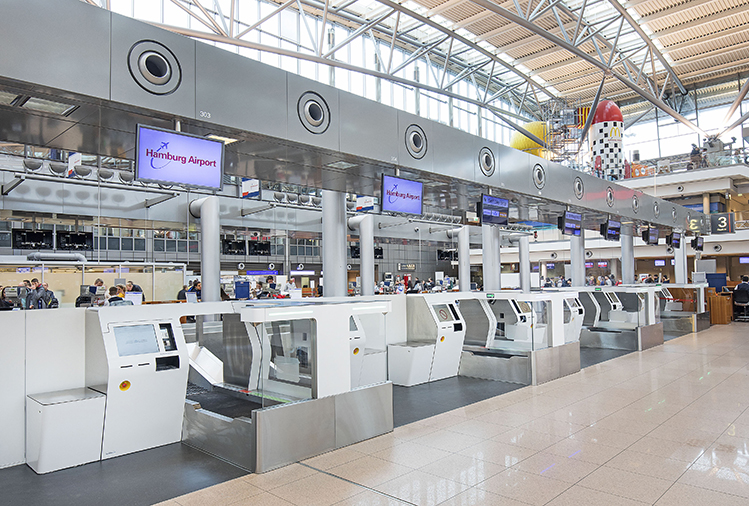 Hamburg Airport has installed 20 self-bag-drop kiosks in Terminal 1. They are currently being used by Eurowings, Air France, KLM and easyJet, recently joined by Lufthansa, Austrian Airlines, SWISS, and SAS Scandinavian Airlines. A further 10 kiosks are due to enter service in Terminal 2 in 2020.

The self-bag-drop service has been particularly well received. 10 kiosks were installed in Terminal 1 last year, followed by another 10 in April 2019. They are currently being used by Eurowings, Air France, KLM and easyJet, recently joined by Lufthansa, Austrian Airlines, SWISS, and SAS Scandinavian Airlines.

“With fully automated baggage checking, passengers benefit from even more independence and flexibility at departure,” says Eggenschwiler. “The aim is to optimise the travel experience of passengers and offer them time-saving processes. What makes Hamburg’s self-service option so special is that the kiosks can be used by various airlines, so that passengers no longer have to look for the counter for their airline, or for a specific self-service kiosk. A further 10 kiosks are due to enter service in Terminal 2 in 2020.”

As part of the comprehensive efforts to implement further passenger processing efficiencies, the Federal Police will be replacing the lanes at the central security checkpoint, one at a time, over the coming months. “Two different models of the modern new checkpoints are being installed,” Eggenschwiler explains. “Because they are longer and broader than the current lanes, there will only be 18 instead of 25. But despite the lower number of lanes, overall capacity will increase. One reason for this is that, in future, three passengers will be able to place their baggage on each belt at the same time. Passengers can overtake one another. This means that experienced passengers, in particular, will pass through the security checkpoint more quickly.”

Hamburg Airport and the Federal Police have been testing the lanes in normal operations since summer 2017, and the results have been very positive. As part of the remodelling work, the airport installed new stations for pre-sorting of cabin baggage in mid-February 2019.

Since April 2019, passengers have been enjoying a redesigned shopping experience at Hamburg Airport. Several shopping spaces on the Pier and in the Airport Plaza have been remodelled since the beginning of the year, including the flagship Heinemann Duty Free store with new brands and a modern design.

Meanwhile, a real sense of place has been created with Gebr. Heinemann’s Destination Hamburg concept store, which is now located in the Airport Plaza, and features a regional design and typical Hamburg souvenirs.

Sustainability and environmental protection play a central role at Hamburg Airport, which is accredited at Level 3 Optimisation of ACI’s Airport Carbon Accreditation. “The airport takes its responsibility as a modern, environmentally-conscious company very seriously, well beyond the legal requirements,” says Eggenschwiler.

He explains that alternative, green fuels are a core component of the airport’s sustainability strategy. “For more than two years now, we have been using synthetic fuels for our diesel vehicles on the apron, with great success. We consistently adopt alternative energies wherever possible. 70% of our fleet has already been converted to alternative fuels.”

Hamburg Airport is also supporting two pilot projects researching the use of bio-kerosene – one with Lufthansa and one with easyJet.

Eggenschwiler also highlights that a bicycle hire station was opened at Hamburg Airport in April 2019. There are 12 parking racks with bikes available for passengers, visitors, local residents and airport employees as an additional environmentally-friendly mobility option. “The station is well connected with the surrounding suburbs, so that the service benefits not only passengers with just cabin baggage, but also nearby residents.”

Significantly, Emirates introduced the A380 on its daily Hamburg-Dubai service in October 2018. “There had already been several A380 take-offs and landings at Hamburg Airport in recent years,” Eggenschwiler comments. “But the launch of daily scheduled operations with the world’s biggest airliner brings with it very special challenges if everything is to run smoothly.”

In preparation, two double jetbridges were constructed in mid-2017 as part of the apron refurbishment. Since then, they have been used for the 777s that Emirates was already operating on the Dubai route. For the A380, which has replaced one of the two daily 777 services, a third ‘finger’ was added. This allows passengers to board directly to the upper deck from the terminal. The waiting area in the adjacent gate was also enlarged to provide more space for the 500, or more, passengers.

“There have also been a number of changes in daily operations behind the scenes, including in the area of safety, the most important concern in aviation,” says Eggenschwiler. “The airport fire brigade, for example, has an additional set of rescue stairs suited for this higher aircraft. An additional aircraft tug was also acquired, in case the other tug suitable for the A380 is unavailable or out of operation. Advance preparation was made for winter: four A380-capable de-icing vehicles are already in place to deal with the 24m-high aircraft. The special demands on personnel and equipment were also taken into account in general planning for snow and ice clearing.” 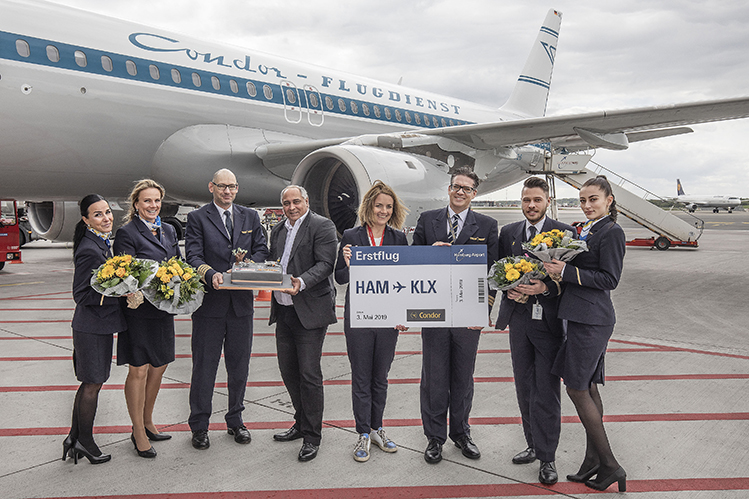 There are also increased frequencies and additional airlines operating on several existing services.

Looking ahead, after a slight decline in passenger numbers in 2018, Eggenschwiler expects growth of 2-2.5% this year to over 17.5 million. “Air traffic is growing. Sometimes that growth is fast, sometimes it is slow. The people of northern Germany still want to be mobile and to discover the world in 2019.”