Glasgow is one of the fastest-growing cities in Europe, and a large amount of real estate development is planned in and around the airport’s economic cluster.

With its recent economic impact study, upcoming 2040 Master Plan, and the recent arrival of the A380, these are also busy times for Glasgow Airport, which is owned by AGS Airports Limited. Leading developments is Mark Johnston, Managing Director, Glasgow Airport. He joined the airport as Continuous Improvement Project Manager in 2000, going on to hold various roles, including Head of Terminal and Security, Head of Infrastructure and Technical Services, and latterly Operations Director, before taking the helm as Managing Director in May 2018.

“My first year as MD has been both hugely rewarding and at times challenging,” he begins. “We enjoyed a period of sustained growth up to 2017 – our record year which saw the airport welcome 9.9 million passengers. Things began to slow down in early 2018, and in February Ryanair announced the closure of the airline’s Glasgow base. Ryanair had grown considerably since arriving in Glasgow in 2014 and the closure meant the loss of 100 jobs, almost one million passengers and the number of routes operated by the airline cut from 23 to three – although, since then, four routes have been reinstated.”

The airport’s response to such a significant loss was Johnston’s first priority. “The aviation world has changed and as an airport – and the wider group – we need to adapt by responding to the needs and wants of our airline partners and passengers through our future airport model.”

Meanwhile, a stand-out highlight of Johnston’s first year as MD was introducing the A380 to regular service on Emirates’ Dubai route. “We were creating Scottish aviation history by bringing this iconic aircraft to Glasgow on a daily basis and we invested more than £8 million (€9m) ensuring our infrastructure was ready.” 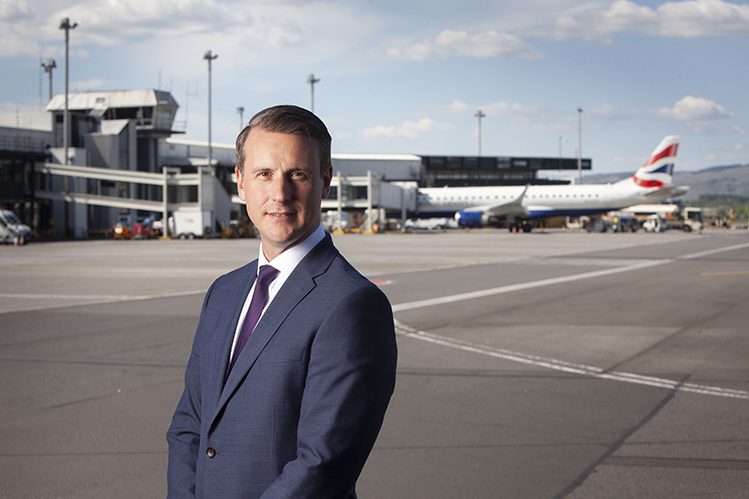 Mark Johnston, Managing Director, Glasgow Airport: “It is imperative that through the ongoing support of our city and national partners we ensure Glasgow Airport continues to thrive and deliver for Scotland. To do this we also need to address the current constraints, such as motorway congestion and delivering the planned rail link, to help realise our plans for growth.”

2018 was Glasgow Airport’s second-busiest year on record, with 9.7 million passengers. “However, as we anticipated, 2019 has been challenging,” Johnston explains. “The impact of Ryanair’s decision to close its base was always going to be most keenly felt this year and we expect passenger numbers for the year to be just over nine million. We anticipate a return to growth in 2020 and my route development team is continually speaking with airlines to add to our destination network.”

The airport prides itself on its long-haul connectivity, and Virgin Atlantic recently announced additional capacity on its Orlando-Glasgow route.

“Whether it’s Virgin’s 747, TUI’s Dreamliner or Emirates’ 777, or most recently the A380, we have continually demonstrated our long-haul capabilities to our airline partners,” says Johnston. “The introduction of the A380 also allowed us to further improve our facilities with Scotland’s only triple airbridge. The stand used by the A380 is a Multi-Apron Ramp System (MARS) stand, so it supports a wide variety of aircraft types, including other long-haul aircraft – both Virgin’s 747 and Air Transat’s A330 aircraft have used it.”

Securing a direct route to China continues to be a key focus. Last year, Glasgow Airport signed a partnership agreement with Shanghai Airport Authority to jointly petition the country’s main airlines to establish a direct link between China and the west of Scotland.

“We welcome 25,000 passengers per year from China’s two main cities Shanghai and Beijing, mostly through British Airways, KLM and Emirates – an increase of 16% in just two years and numbers are continuing to go up,” Johnston explains. “Progress is being made and we continue to work together to increase visitor numbers and we regularly meet Chinese carriers to progress discussions and update them on the market potential of Glasgow.”

Meanwhile, the airport continues the development of its short-haul European route offering, with new services to Frankfurt, Venice and Düsseldorf.

“We play a key role in promoting Glasgow’s reputation as both a city-break destination and as the gateway
to Scotland,” says Johnston. “It takes a partnership approach to not only tell Glasgow’s story, but to sell its growing reputation as a destination of choice to airlines. To do this, we work closely with our city and national partners to develop compelling propositions for carriers to choose Glasgow over competing cities.”

In addition, over the past decade Glasgow Airport has increased its freight throughput nearly four-fold and is the principal freight airport for Scotland, with more than £1.6 billion (€1.8bn) of exports and £1.8 billion (€2bn) of imports passing through the airport in 2017. “Of the 30 airlines operating at Glasgow Airport,
17 support Scotland’s export market by carrying freight,” Johnston notes. “Those airlines have helped Scottish businesses export almost 20,000 tonnes of cargo, which is predominantly belly hold, including whisky, Scottish salmon and oil well equipment.” 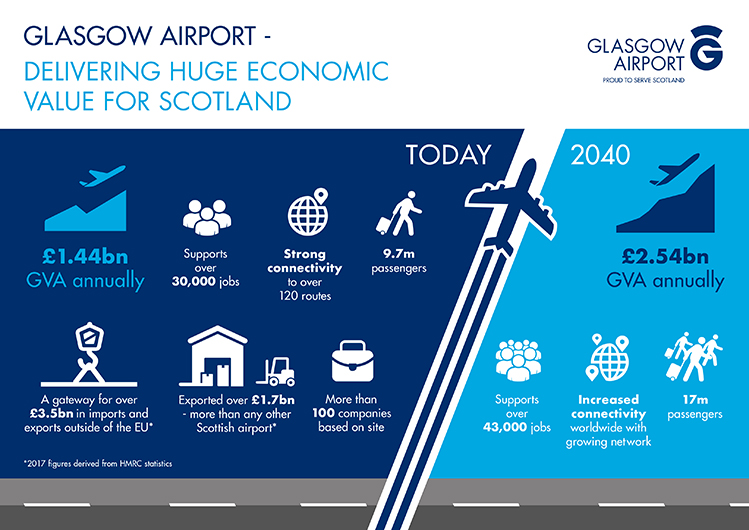 A recent study by York Aviation highlights that Glasgow Airport contributes £1.44 billion (€1.6bn) to the Scottish economy annually and supports over 30,000 jobs.

“The study confirmed the huge economic benefits the airport generates today, but also highlighted that the economic benefits unlocked by the Master Plan can increase to £2.5 billion (€2.8bn) GVA and support 43,000 jobs as the airport grows,” says Johnston. “The findings were hugely significant and we want to continue to grow in a sustainable and responsible manner. We have invested more than £130 million (€145m) in our facilities since 2011 and have a strategy in place through our Master Plan to put us on the path to becoming a 17 million passenger airport by 2040.”

As well as developing Glasgow’s valuable role as a major cargo and maintenance hub in Scotland, the airport is collaborating with partners to promote inclusive growth which creates opportunities for all.

“We can’t do this on our own and it is imperative that through the ongoing support of our city and national partners we ensure Glasgow Airport continues to thrive and deliver for Scotland,” Johnston comments. “To do this we also need to address the current constraints, such as motorway congestion and delivering the planned rail link, to help realise our plans for growth.”

He adds that building the planned rail link is crucial for the airport and the wider region. The most recent plans proposed by the Connectivity Commission favour a city-wide metro system, much like London’s Docklands Light Railway, with Glasgow Airport the first stop.

While planning for further expansion, the airport is committed to environmental sustainability. “We’ve made significant progress, such as the recent investment in a nine-strong fleet of plug-in hybrid vehicles for our airfield operations and the pending introduction of Scotland’s first-ever full-electric buses later this year,” says Johnston. “Glasgow Airport’s electricity grid supply is also now 100% sourced from renewable energy, and we continue to work with our retailers and tenants to improve our waste performance.”

Looking ahead, he explains that the airport plans to launch the Master Plan consultation in the autumn, with a view to finalising it by the end of the year. “Without pre-empting the publication, it is likely to include major investment in expanding terminal and airfield facilities, the new cargo and maintenance hub, and plans to improve our surface transport infrastructure. Laying the foundations of our future airport model is absolutely critical to ensuring Glasgow Airport continues on a pathway to growth and remains an attractive proposition for our airline partners and passengers.”