Airports are crucial for our interconnected world, but their role as traffic hubs also makes them emission hotspots. Fuel efficiency and a focus on renewable energy sources can help reduce the carbon footprint, but airport management has little influence on these issues. However, one underestimated source of energy waste (and thus unnecessary emissions) is traffic inefficiency – something airport management can tackle directly. Air traffic is already constantly monitored, analysed and optimised. Land-bound airport traffic, however, has room for swift improvements. 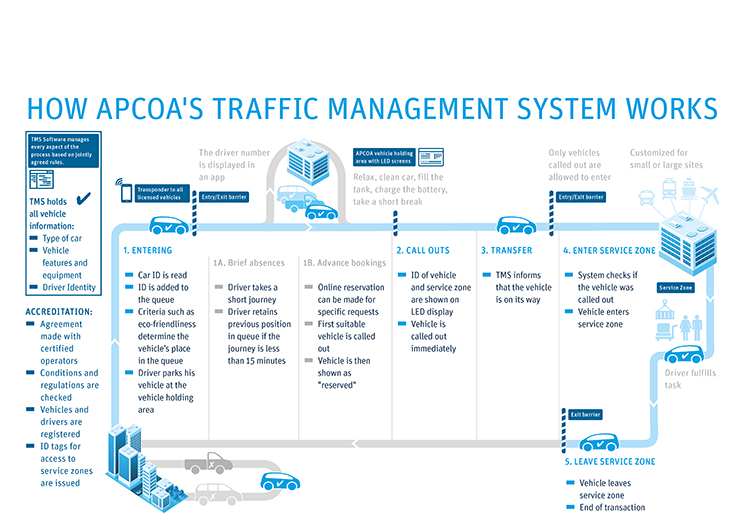 Passengers leaving the airport have three basic means of continuing their journey: public transport, having a personal acquaintance pick them up, or a taxi service. Public transport is usually already relegated to its own areas, but taxi pick-up zones are often chaotic. The advent of app-based ride-sharing services has exacerbated the problem by adding more drivers (and cars).

Competition, too, has increased. As most passengers are already tired of travelling, competition is not driven by lower prices or better service, but mainly by drivers’ speed in seizing an opportunity. A spot near the front of the queue is hotly contested, and few drivers dare switch off their engines lest they miss a chance. Break times are kept as short as possible to maximise earning potential. This makes electric cars less viable, as they are slower to recharge.

At Stockholm-Arlanda and Berlin-Schönefeld, APCOA has implemented a taxi management system that cuts back on waste and chaos.

The first step was to assume control over who gets to offer their services. Taxi drivers at these airports have to register. This allows a preselection of officially certified taxi drivers. If fuel-efficient, hybrid or fully electric cars get preferential approval, this can also massively impact the overall carbon footprint of pick-up traffic. To help convince drivers of the fairness of the process, registration is free of charge. Unregistered cars are unable to enter the pick-up zones. Registered cars, upon arriving, are entered into the queue automatically.

Thanks to the virtual queue, drivers can park their taxis in a designated waiting area, where they can switch off the engine until they are called to the front. Electrical outlets allow recharging of plug-in hybrids and electric cars while waiting, making them more viable. Arlanda awards these vehicles better waiting positions. The results are impressive: between 2009 and 2017, the proportion of environmentally-friendly taxis at the airport rose from 16% to 94%.

The benefits: for drivers and passengers

In the case of the taxi management systems at Arlanda and Schönefeld, it was especially important to convince the drivers. Continuous dialogue and open feedback laid the foundation for improving the system and pointing out its advantages. The automatic queue guarantees that taking a short break does not impact the day’s earnings. A main concern for taxi drivers, as it turns out, was fairness, and this too is improved. Previously, whenever a trip was very short, the driver would have to get back to the end of the queue. Now, there is a grace period: if a trip is so short that the taxi gets back within that period, it is allocated a more favourable position in the queue.

Passengers benefit as well. Not only does the controlled number of taxis in the pick-up area lead to less chaos, a more relaxed atmosphere and cleaner air, but the taxi management system also allows them to specify what kind of taxi they need.

The next step: optimising private pick-ups and arrivals

Going back to the three main modes of transport, this leaves personal pick-ups as yet un-tackled. As these involve several very different actors, forced registration is not viable. The same goes for traffic generated by the passengers of departing flights. An app like our own APCOA FLOW can help streamline these types of traffic. Contact-less automatic payment and a guidance system that shows the shortest way to the best available parking space reduce waiting times and unnecessary driving distances, cutting down on energy waste and stress for drivers.