While the business opportunities presented by drones are known to many in the aviation industry, incidents in recent months have raised awareness of both the safety and security threats that drones can pose to airports. ACI EUROPE has been working with EASA and EUROCONTROL to develop EU-wide rules to regulate their use. And in recent months, it has also created a Drones Task Force to develop expertise and provide guidelines for airports. Aidan Flanagan reports.

Recent years have seen Unmanned Aircraft Systems (UAS), or drones, grow from being a largely military interest with some small hobby options, to a large industry promising a host of commercial and leisure uses. This brings an exciting array of new opportunities, including for airports, who can put drones to use in security surveillance, aircraft and airfield inspection, calibration of navigation aids and wildlife management, to name just a few. The growth in drone use also brings with it, however, a new safety and security concern, which is of critical significance to airport operations.

Incidents at airports involving drones have escalated in the past few years, with substantial media attention on the matter since London Gatwick was closed for two days in December 2018 due to a series of drone sightings that presented a clear threat to aviation safety. The Gatwick incident disrupted 1,000 flights and over 140,000 passengers, at one of the busiest travelling periods of the year, highlighting the urgent need for a solution that can prevent such occurrences. 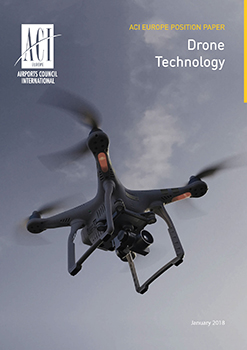 In its Position Paper on Drone Technology of January 2018, ACI EUROPE calls for a European safety rulebook that would ensure effective regulation of drone operations at and around airports.

In ACI EUROPE’s Position Paper on Drone Technology of January 2018 we call for a European safety rulebook that would ensure effective regulation of drone operations at and around airports. It is imperative that airports be designated no-drone zones and that clarity be ensured over which technologies may be safely deployed at airports to detect unauthorised drones and prevent them from interfering with airport operations.

Clarity is also required as to which entities – airport operators, ANSPs, state authorities, etc. – are responsible for surveillance, detection and enforcement. For this, a common European approach is necessary in order to avoid a patchwork of national measures.

A registration scheme is required for drones and their owners/operators, with any subsequent drone operations at the airport would then be subject to authorisation based on clear rules & procedures for the chosen drone scenario (including risk assessment, the drone type being used and the pilot operating the drone).

With these needs in mind, ACI EUROPE’s Drones Task Force, brings together safety and security experts from a number of European airports. The Task Force will develop a Concept of Operations for drone deterrence at airports, as well as use cases for the legitimate deployment of drones in airport operations. It will cooperate with EUROCONTROL in this work, so as to develop an integrated approach to unmanned traffic management, as well as feed into EASA’s regulatory efforts to develop standard scenarios for the approval of some specific drone operations at airports.

It is good to see that EASA and the European Commission have drafted regulations that would set out requirements for a range of drone operations, depending on the drone being used, its purpose, the relevant airspace and the outcome of the mandatory risk assessment. This represents a good basis for ensuring that authorised drone operations are safe and properly managed.

The problem comes, however, from unauthorised operations. Proper registration and authorisation procedures, coupled with technology to detect and prevent unauthorised drones in airport environments, will reduce the threat posed by drones to airport operations. Clear procedures for dealing with non-cooperative drones will ensure that incidents are resolved as quickly as possible and reoccurrences prevented, minimising any disruption to airport activity. With this in place, the airport may then benefit from drones for its own ends, knowing that it is possible to deploy a drone in certain airport operations safely and securely, based on clear technical and administrative criteria. 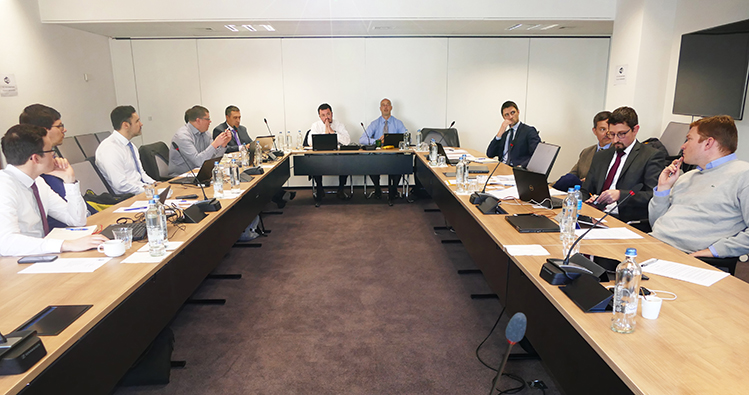 The first meeting of ACI EUROPE’s Drones Task Force took place in February, bringing together safety and security experts from a number of European airports. The Task Force will develop a Concept of Operations for drone deterrence at airports, as well as use cases for the legitimate deployment of drones in airport operations.

Technology generally moves at a faster pace than regulation, and the rush to regulate can often lead to inappropriate or quickly outdated rules. Europe must move swiftly and smartly in addressing the need for drone regulation before there is a real disaster at an airport, all the while enabling the safe and secure integration of drones where beneficial to the air transport sector. ACI EUROPE and its Drones Task Force stand ready to assist in this process through provision of real-world, technical expertise and best practices developed at various locations, so that the risk to aviation posed by this technology also remains an opportunity for airports and their stakeholders.