Israel Airports Authority officially opens the new Ramon International Airport – Eilat to domestic traffic on 19 March and to international traffic on 2 April. Ahead of the opening, the airport’s Managing Director Hanan Moscovitz gave a briefing to Ross Falconer.

The new Ramon International Airport is Israel’s second international airport and will serve the Red Sea resort city of Eilat and its surrounding region. Israel’s southernmost city is a busy port and popular resort at the northern tip of the Red Sea. Its beaches, coral reef, nightlife and Negev Desert landscape make it a popular destination for domestic and international tourism. 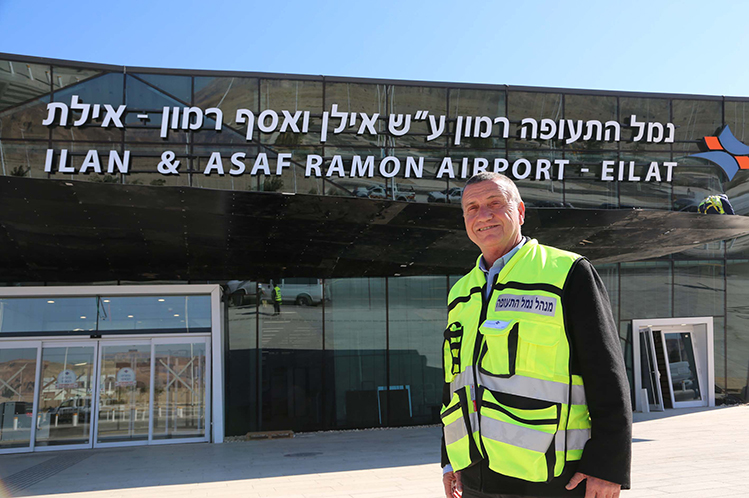 Hanan Moscovitz, Managing Director, Ilan and Asaf Ramon Airport: “Throughout the year, we will focus on further enhancing passenger services and airport operations, adapting to the needs and requirements of our passengers, airlines, ground handling agents, and all partners, in accordance with the lessons learned from the gradual opening and the first months of operation.” Photo credit: Sivan Farag

On a national level, the NIS 1.8 billion (€440m) investment provides a second international airport and a southern gateway to Israel. “On a regional level, it replaces an airport built in the city of Eilat 70 years ago, which served domestic traffic, and also a military airport – Ovda Airport – that was used by Israel Airports Authority to serve international traffic,” explains Hanan Moscovitz, Managing Director, Ilan and Asaf Ramon Airport. “The airport will contribute greatly to the economic development of the region.”

A comprehensive Operational Readiness and Airport Transfer (ORAT) programme has been undertaken, with the gradual transition to full operations allowing detailed examination of all systems, processes and procedures. This has involved cooperation with all airport partners, and included test flights by Arkia and Israir on 4, 11 and 18 February.

The phased opening will see the current Eilat Airport close at 17:30 on 18 March, with domestic operations beginning at Ilan and Asaf Ramon Airport at 14:30 on 19 March. Three domestic routes will initially be operated by Arkia and Israir to Ben Gurion, Dov Hoz and Haifa airports.

International civil aviation operations will then cease at Ovda Airport at midnight on 31 March, and begin at Ilan and Asaf Ramon Airport on 2 April. The first international arrival will be a Finnair service from Helsinki. “We will welcome international flights from about 20 countries and 40 destinations by Ryanair, Wizz Air, Ural Air, Finnair, Rossiya, Transavia Holland, Transavia France, ASL, and more,” says Moscovitz.

It is forecast that Ilan and Asaf Ramon Airport will welcome 1.4 million domestic passengers and 400,000 international passengers in 2019. That is expected to grow by about 10% to a total of two million passengers in 2020.

Israel Airports Authority is being proactive in its route development strategy. Notably, airlines will be exempt from landing fees at the new airport to incentivise the introduction of new services.

“We will work to maintain the existing airlines’ operations and destinations, and we will continue to look for new destinations in Europe, as well as exploring new markets in Asia, Africa and America,” Moscovitz comments. “In accordance with the cooperation of the Israel Airports Authority, the Ministry of Transport and the Ministry of Tourism, the aim is to increase the number of destinations and frequencies by providing appropriate incentives.”

Once the new airport is fully operational, the existing Eilat Airport area will be given to the city of Eilat for the development of hotels, housing, green areas, parks, and new traffic arrangements within the city. Meanwhile, the area used by Israel Airports Authority at Ovda Airport will be returned and transferred to the Israeli Air Force.

There is a strong commercial & retail focus at the new airport, with the 50,000sqm passenger terminal including 3,320sqm of retail and food & beverage space.

“As in any advanced and modern airport, there is a mix of duty free shops for alcohol, cigarettes, perfumes, consumer goods and more, as well as convenience stores, cafés and restaurants,” Moscovitz explains. “The airport is located in the municipal area of the city of Eilat, which is declared a ‘tax free zone’, and due to the intermingling of international and domestic passengers we found that there is a need to combine shops without VAT for the domestic passengers and the public – meeters & greeters – and duty free shops for the international passengers.”

A continuous spatial experience for the passenger 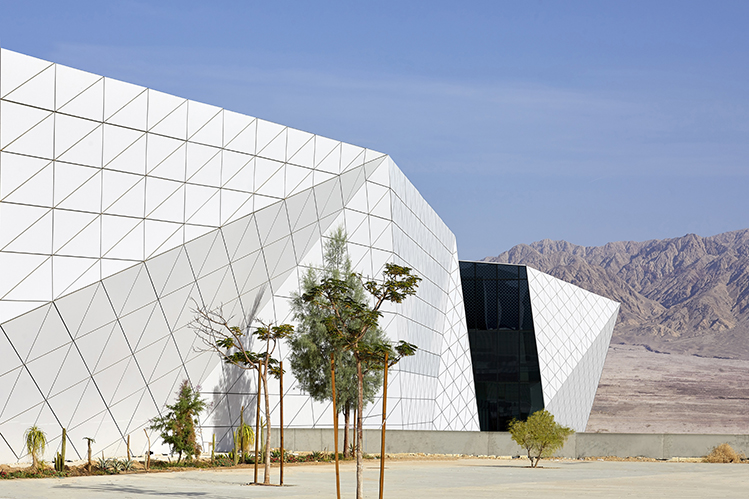 The rock formations found in Israel’s Timna National Park served as inspiration for the geometry of the passenger terminal. The steel and concrete skeleton structure is cladded to the exterior with insulating white aluminium triangular panels, while the interior features a contrasting bamboo-wood cladded scheme. Photo credit: Nick Hufton

The airport, with its striking minimalist design, is a landmark at the heart of the Negev Desert. It was designed by a partnership between two Israeli firms – Mann-Shinar Architects and Moshe Zur Architects – which also served as project planning managers. They describe Ilan and Asaf Ramon Airport as “unified under a unique holistic design language that frames the stunning scenery of the Negev Desert mountainscape”. Indeed, the rock formations found in Israel’s Timna National Park served as inspiration for the geometry of the passenger terminal.

The steel and concrete skeleton structure is cladded to the exterior with insulating white aluminium triangular panels, while the interior features a contrasting bamboo-wood cladded scheme.

Alongside this is a strong focus on facilitating a world-class traveller experience. “Advanced technologies installed and implemented for the benefit of the passengers and the airlines include self-service check-in kiosks, e-passport kiosks, and speedy boarding gates. Meanwhile, self-boarding will be implemented later on,” says Moscovitz.

The priority in 2019 is, of course, the successful opening of the new Ilan and Asaf Ramon Airport, and the seamless transition of operations from Eilat and Ovda.

“Throughout the year, we will focus on further enhancing passenger services and airport operations, adapting to the needs and requirements of our passengers, airlines, ground handling agents, and all partners, in accordance with the lessons learned from the gradual opening and the first months of operation. Beyond 2019, we aim to increase domestic and international traffic, reaching 2.5 million passengers in 2025, while improving the level of service.”