Avinor Oslo Airport is hosting this year’s ACI Airport Exchange, 27-29 November. Ahead of the event, Dag Falk-Petersen, CEO Avinor, shared his vision for the group with Ross Falconer.

Norway is a long and rugged country with almost 50 airports ranging from Oslo, its major, with 27.5 million passengers to the smallest with around 5,000. These serve a diverse landscape, from the urban vibe of Oslo to the Arctic life in Svalbard.

The national aim is to offer a high level of services with equal standards to citizens in all parts of the country, which is why Avinor operates 45 airports in a country with a population of just 5.5 million. In 2018, these airports will welcome 54 million travellers, with Oslo as the national hub and the heart of Norwegian aviation. 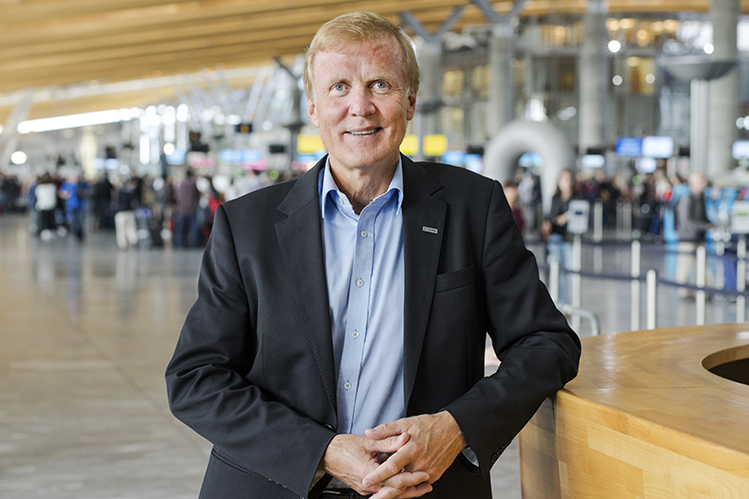 Dag Falk-Petersen, CEO Avinor: “Avinor works continuously with airlines, Norwegian export businesses, and the travel industry to attract routes that meet their needs. Our aim is to develop Oslo Airport into an international hub, as well as getting more routes to airports across Norway.”

“As a national hub, Oslo Airport also gives us great opportunities as an international hub,” explains Dag Falk-Petersen, CEO Avinor. “Passengers wanting to explore both our stunning capital Oslo and the rest of the spectacular country can fly to Oslo, stay a few nights and fly out to 44 other regional airports. In terms of international transfer, we also see a huge increase of passengers choosing to travel to the airport, stay a few nights in Oslo and then travel to their international destination. This is also an important reason why we are expanding our non-Schengen area.”

Avinor has seen steady growth at its airports in 2018, with a total traffic increase of 3% across the portfolio for the year-to-date, and the growth trend is expected to continue throughout 2019. This is being driven by increasing numbers of international travellers. Indeed, Avinor’s Travel Survey 2017 shows that increasing tourism, in particular, has driven growth in passenger numbers.

Developing Oslo into an international hub

Avinor Oslo Airport celebrated its 20th anniversary on 8 October, with passengers and employees invited to a variety of events at the airport throughout the day. “This included a vast media presence,” says Falk-Petersen. “I do believe the most important thing for us will be to continue the everyday effort to offer even better facilities for the airlines and passengers, and hopefully that will result in more direct routes to major and important markets. In the third quarter, we achieved our highest-ever score in the ACI ASQ customer survey, and that indicates that we are moving forward in the right direction.”

The opening of the new terminal in April 2017 was the biggest expansion in 20 years and effectively delivered a “new Oslo Airport”. Avinor is building on that with Expansion Non-Schengen East, which will help facilitate continued international growth. “Non-Schengen traffic volumes have been growing
steadily and are expected to continue,” Falk-Petersen explains. “This project will result in a new extension of 30,000sqm, including new gates suitable for larger aircraft and new commercial areas.”

The current capacity of the non-Schengen area is 5.5 million passengers a year, and after the expansion that will grow to 8 million. This will increase Norway’s competitiveness and provide considerable economic benefits. 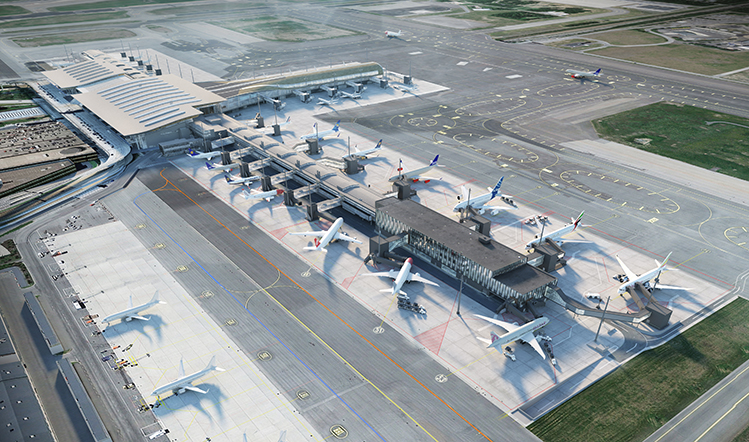 Work began on Expansion Non-Schengen East at Avinor Oslo Airport in October. The project will be completed in Q2 2022, adding 30,000sqm to the East Pier. Photo credit: Avinor / Nordic – Office of Architecture

Indeed, the air transport sector is vital to securing Norway’s continuing economic growth. “Air transport is the most important way to travel to and from rural areas in Norway, and all distances of more than 300km,” Falk-Petersen comments. “In terms of economic growth, a good example is cargo where Oslo is now playing a significant role as a hub. Fresh salmon from all over the country is transported via Oslo Airport to international markets with both cargo airlines and passenger airlines. The Chinese need for fresh seafood has resulted in new direct routes from Oslo, which is highly important for the future growth of Norwegian seafood export to China. Within a few years, we expect around 70,000 tonnes of seafood to be transported from Oslo Airport to China each year.”

Importantly, Hainan Airlines recently announced it will open a direct route between Beijing and Oslo in spring 2019. “Norway is the Nordic country with the largest number of Chinese tourists. This trend has seen very positive developments in recent years,” says Falk-Petersen. “It is, therefore, only natural that a large and recognised airline such as Hainan Airlines would want to open a direct connection to Oslo. With Hainan Airlines, onward connections are very good to the major city of Shanghai. There are also good connections to many other cities in China and Asia, which are interesting destinations for both Norwegian tourists and, not least, Norwegian businesses. Last year, Oslo Airport saw 36% growth in cargo flown. More than 90,000 tonnes of fresh Norwegian seafood were flown out.”

Falk-Petersen believes the Hainan Airlines service is just the beginning in terms of expansion of the Oslo long-haul network. “Avinor works continuously with airlines, Norwegian export businesses, and the travel industry to attract routes that meet their needs. Our aim is to develop Oslo Airport into an international hub, as well as getting more routes to airports across Norway.”

Other important new route announcements include a daily Wizz Air service between Gdansk and Oslo, launching in April 2019; SunExpress (a joint venture of Lufthansa and Turkish Airlines) increasing frequency between Oslo and Izmir, as well as introducing new services from Oslo to Antalya and Konya in summer 2019; Ethiopian Airlines increasing frequency between Oslo and Addis Ababa to six times weekly, and launching a new twice-weekly Oslo-Asmara service in December 2018; and Loganair adding new routes from Edinburgh to Bergen and Stavanger in summer 2019.

“A global movement to electrify aviation”

Norway is a pioneer in environmental innovation, and Avinor is certainly progressive in its approach to sustainability. Indeed, four of its airports – Oslo, Trondheim Airport Værnes, Bergen, and Stavanger – are accredited at Level 3+ Neutrality of ACI’s Airport Carbon Accreditation, while Kristiansand Airport is accredited at Level 2 Reduction. 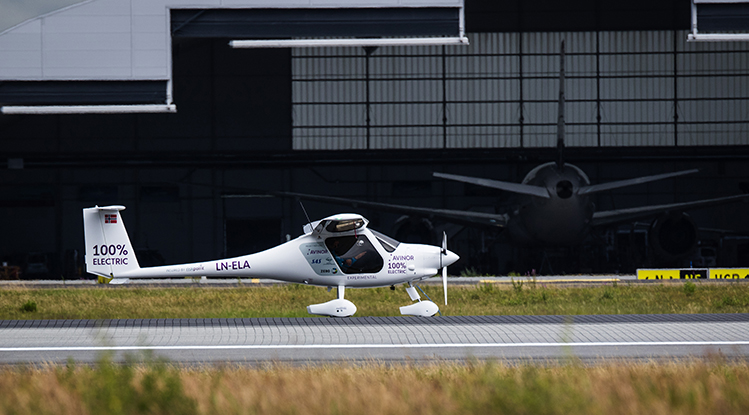 Avinor and aviation industry partners, including Widerøe and SAS, are working to help Norway become a world leader in electric aviation. It is a particular passion of Falk-Petersen, who, in June, took part in Norway’s first electric-powered flight alongside Norway’s Minister of Transport and Communications Ketil Solvik-Olsen.

“In addition to energy efficiency and sustainable bio jet fuels, electrification will play an important role in reducing the climate gas emissions from aviation,” says Falk-Petersen.

The goal is to make Norway the first country where electric aircraft have a significant share of the market, and to electrify all domestic flights by 2040.

“For myself, I see it as an honour to be part of a global movement to electrify aviation, of course,” Falk-Petersen adds. “It was great to be personally involved in the first flight together with the Norwegian Minister of Transport and Communications. It was also great fun. We see this as the starting point of an industry development that I believe will come sooner than most people expect.”

This progressive approach extends beyond the environment. For example, Avinor has been using Virtual Reality training, both for the training of airport personnel in the terminal, and for the training of air traffic controllers and handling agents. “This gives us better and more effective training, in an increasingly competitive environment,” Falk-Petersen comments. “Avinor operates and develops a nationwide network of airports for the civil sector, and a combined air navigation service for the civil and military sectors. Our ambition is to continue this development, increasing efficiency, providing excellent customer service for the airlines, as well as providing travellers with an even better airport experience. Avinor aims to be world-class, introducing new technologies both in passenger service and in daily airport operations.”

“The most beautiful capital in the Nordic region”

Visitors at this year’s ACI Airport Exchange will experience one of Europe’s most vibrant capital cities and a hotbed of food, music and culture. They will also see first-hand the dynamic growth of Avinor Oslo Airport. The airport is also hosting the ACI EUROPE-SESAR workshop on integrating drone operations and services at airports on 26 November, immediately prior to ACI Airport Exchange.

Falk-Petersen and his team look forward to welcoming delegates from all around the world to this global event. “When visiting Oslo there are several things you must experience. If you are a self-proclaimed foodie, this is the city for you as our beautiful capital offers a wide range of great restaurants spread across the city. We also have very nice coffee houses, as Norwegians are taking aim at teaching the world how to brew the best coffees – putting them in the world’s top three coffee consuming nations. My best recommendation would be to visit the website of our partner Visit Oslo, which has many good suggestions for visitors to the most beautiful capital in the Nordic region.”