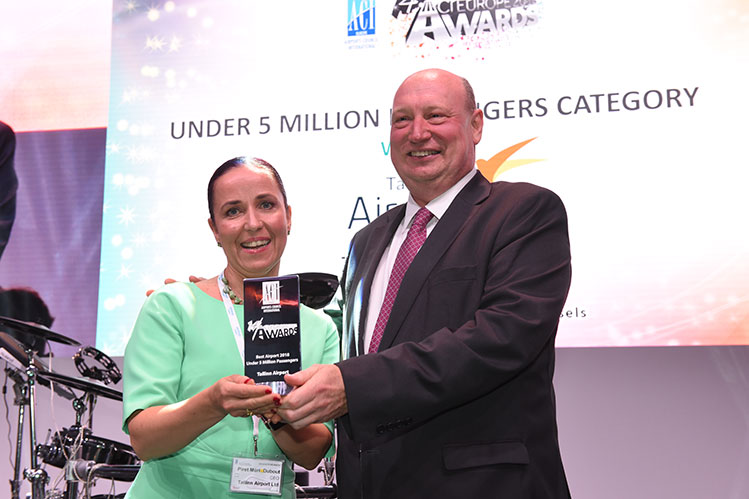 Last year, Tallinn Airport completed its largest expansion project of recent years. Meticulous planning and extensive coordination between the stakeholders were at the heart of its strategy to ensure that the large-scale expansion and reconstruction of its airside area caused as little disruption to the daily operations of the airport as possible. Still, the airport experienced its busiest-ever year, with 2.65 million passengers – up 19% year-on-year. This was recognised by the judges at this year’s ACI EUROPE Best Airport Awards, where Tallinn Airport won in the ‘Under 5 million passengers’ category.

“Staying on schedule and on budget with such a complex task was a challenge unto itself, particularly since the project was co-funded by the EU Cohesion Fund,” notes Piret Mürk-Dubout, CEO Tallinn Airport. “Each and every participant contributed towards these objectives, and it was extremely thorough planning and monitoring that kept the project on track throughout the process. Over 300 meetings were held during the two years, not including the daily briefing sessions between the supervisors and the builders.”

A new state-of-the-art security screening checkpoint, doubling capacity at peak times, and improved airport access with construction of a direct tram line from the city centre, are just two highlights of the airport’s expansion project.

The jury recognised the airport’s close cooperation with the airlines and other stakeholders, such as the Estonian Tourism Board, to promote Estonia as a tourist destination. Mürk-Dubout explains that, based on a recent survey, the aviation sector contributes approximately 2.6% to Estonia’s GDP. “We rely heavily on international teamwork throughout the aviation industry for reaching out to destination markets and airports of interest, in order to attract new airlines and promote challenging destinations. Tallinn Airport’s mission statement is very clear about our objective – to connect Estonia with the rest of the world.”

Moreover, the airport’s commitment to mitigating its environmental impact was also highly commended by the judges. Some of the major ecological enhancements in 2017 included the instalment of new sewage and wastewater collection systems, establishing separate snow-melting areas, and a standalone engine testing area. A major upgrade from both an environmental and a safety perspective was the installation of a new runway lighting system with energy-efficient LED lighting.

“A sustainable and responsible attitude towards our environment is a value shared by everyone at Tallinn Airport,” says Mürk-Dubout. “Aviation is an area that inevitably has a significant impact on the environmental condition and environmental safety. It is, therefore, important that we strive to mitigate the company’s environmental footprint and be as ecological as possible in our operations.”

Tallinn Airport’s passenger numbers continue to grow at a healthy pace in 2018, rising by 16% in the first six months of the year. Indeed, double-digit growth is expected to continue for the remainder of 2018. “This brings us very close to exceeding the three million threshold already this year, which would be a first for Tallinn Airport,” Mürk-Dubout comments. “Dealing with rapid growth rates has obviously been an exciting challenge, but last year’s success demonstrated that we are able to overcome operational issues without compromising the high customer service quality standards our passengers have grown to love us for. Not to mention the safety and efficiency of our operations, of course. Today we are better prepared for dealing with growing passenger flows, and Tallinn Airport is in the process of conducting a feasibility study to investigate options for the further expansion and development of the passenger terminal and the apron area.”