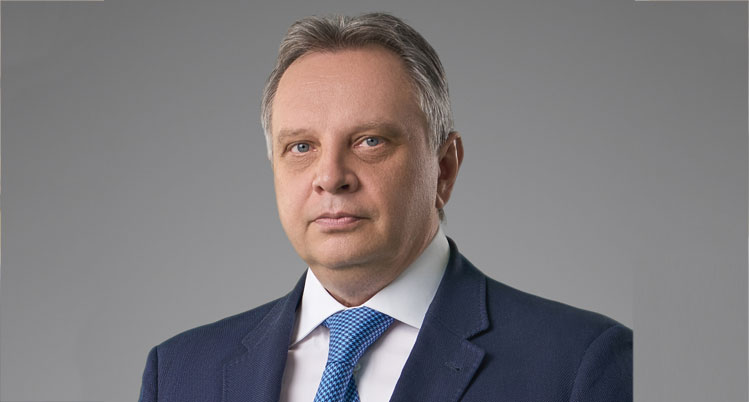 Mikhail Vasilenko, CEO Sheremetyevo International Airport: “The new Terminal B and inter-terminal passage reduced the load on the Southern Terminal Complex, and provided the teams, guests and fans with the best service. We served 703 flights with teams, families of football players, FIFA delegations and charter flights with fans, in just one month.”

The global gaze gathered on Russia this summer, as the country hosted the world’s most-watched sporting event – the FIFA World Cup. For many visitors, Moscow’s Sheremetyevo International Airport was their first impression of the country on arrival, and their last impression on departure, and preparations included the opening of the impressive new Terminal B.

A year before the event, Sheremetyevo established a ‘situation room’ to coordinate all World Cup related activities, and anticipate any potential challenges. Numerous exercises took place to assess the terminals’ readiness to welcome guests and participants, including under the supervision of the FIFA Organising Committee. 800 volunteers were trained solely for the duration of the World Cup, and technical support points for holders of a FAN ID were situated in each terminal.

During the month-long tournament, Sheremetyevo served 33,800 flights (+16% year-on-year) and 4.7 million passengers (+11%). “The new Terminal B and inter-terminal passage reduced the load on the Southern Terminal Complex, and provided the teams, guests and fans with the best service,” explains Mikhail Vasilenko, CEO Sheremetyevo International Airport. “We served 703 flights with teams, families of football players, FIFA delegations and charter flights with fans, in just one month.”

These figures build on a successful 2017, in which passenger numbers increased by 17.8% to 40 million. Key airline partners Aeroflot and Nordwind Airlines significantly increased their services within Russia and to Asia. “Our strategy to increase passenger traffic involves both further development with existing key carriers and proactive work to increase our competitiveness with the aim to attract new airlines,” says Vasilenko.

Last year, several new carriers launched services from Sheremetyevo, including China’s Beijing Capital Airlines and Lucky Air, the UAE’s flydubai, Cyprus’ Cobalt Air, and Turkey’s Atlasglobal. It is worth noting the rapid development of traffic to Chinese destinations, which rose by 16% year-on-year. Last September, Sheremetyevo welcomed the launch of a twice-weekly China Southern Airlines service from Shenzhen, and the airport is building a role as a major hub connecting China and Europe.

“The Chinese aviation market has high potential. It is one of the fastest-growing markets, and is a priority for our further development,” Vasilenko comments. “Sheremetyevo serves eight Chinese airlines, operating 15 daily flights on 19 routes. Beijing Capital Airlines launched flights from Hangzhou to Sheremetyevo in July 2018, with Hangzhou becoming the 19th Chinese destination on our route map.”

Sheremetyevo’s dynamic route development saw it ranked second in terms of growth in direct connectivity in ACI EUROPE’s Airport Industry Connectivity Report 2018. Meanwhile, passenger numbers rose by 13% in the first six months of 2018 to 20.5 million. International traffic grew by 11%, and domestic traffic by 16%. The airport forecasts overall growth of 12% this year to 45.5 million passengers.

“The highest level of passenger satisfaction”

Sheremetyevo is implementing a large-scale, long-term development programme up to 2026, in which infrastructure investment of US$2.5 billion (€2.1bn) will ultimately increase annual passenger capacity to 80 million. The most important part of this was preparations for the 2018 FIFA World Cup, including the new Terminal B with a capacity of 20 million passengers, an underground inter-terminal passage with passenger and baggage tunnels and two stations, a modern automated cargo terminal with an annual capacity of 380,000 tonnes, and a third refuelling complex.

“Before Terminal B opened, 600 volunteers participated in three months of operational readiness testing,” says Vasilenko. “This avoided any technical malfunctions upon opening, and our ACI ASQ survey results prove it. Terminal B demonstrates the highest level of passenger satisfaction with the quality of service. Passengers of all categories highly evaluated the comfort of the departure and arrival halls, VIP and business lounges, seamless check-in, and the terminal’s special design.”

Indeed, Terminal B is visually striking, with the architectural concept developed by the Serbian division of British firm RMJM being based on the aesthetics of Russian Constructivism.

“The brief asked for a design which could support an incredible increase in passenger flows while showcasing the real soul of Russia and leaving an impression on the passengers flying into and through Sheremetyevo Airport,” explains Jelena Nikolic, RMJM Serbia’s lead architect. “Our proposal based on avant-garde Russian Constructivism combines technology and tradition, past and future, culture and efficiency, transforming the terminal into a door through which Russia can tell its story and welcome the world.”

The architects focused on the works of Russian avant-garde artists of the early 20th century Lyubov Popova and Varvara Stepanova, who were pioneers of ‘industrial art’, combining social meanings and practical ideas. “So, they created the interiors of Terminal B on the basis of simple and clear geometric shapes saturated with bright colours,” Vasilenko adds. “The two stations of the underground inter-terminal passage are also decorated in the same style to create a unified visual space.”

Attention has also been paid to the multimedia systems in addition to the architectural and design solutions. There are ‘live’ digital panels in Terminal B, with the media system broadcasting visual images of Russia and its heritage, such as ballets, museums, historical sights, and cultural artefacts. “Our passengers and guests take photos and selfies in Terminal B and share them via social media. We are very happy about it. It means that our discerning clients are enjoying Terminal B so much,” Vasilenko enthuses.

Indeed, Sheremetyevo is proactive in communicating with travellers via social media, and was the first airport in Russia to launch a mobile app on IOS and Android. The app provides detailed flight information, a parking payment facility, and terminal navigation, among other services. “Travellers can get answers to their questions in Russian or English via the WhatsApp and Viber messenger services,” Vasilenko notes. “Sheremetyevo also communicates with passengers via official accounts on Facebook, Instagram, and VKontakte (a Russian social media platform).”

A new baggage handling system was installed as part of the Terminal B and inter-terminal passage project. Built directly under the airfield are two tunnels. While one carries passengers, in the other tunnel is BEUMER’s autover Independent Carrier System, which transports baggage at speeds of up to 30km per hour.

“The new tunnels were not only required to handle the increased baggage flow, but also provide quicker transfer times at Sheremetyevo for both baggage and passengers,” explains Klaus Schäfer, Managing Director, BEUMER Group A/S. “To offer the optimum system design for these requirements, we chose our autover solution because it provides a good, functional and reliable solution for baggage transport between terminals.”

The autover features a rail with no moving parts, which virtually eliminates the difficult task of carrying out maintenance in very long tunnels. In addition to the low maintenance requirements, the airport can also rely on having very little wear and tear on any parts installed in the tunnel.

“The autoca carts, which carry the items through the system, offer a highly efficient baggage handling operation because the carts are maintained in a central location which avoids any system disruption,” says Schäfer. “This means Sheremetyevo is then able to send the carts for maintenance according to a pre-configured schedule, within operational hours.”

Reaching the contractual milestone for handover is often associated with lots of pressure, which is magnified when the airport plays an important role in big, international events such as the 2018 FIFA World Cup. “Needless to say, both Sheremetyevo Airport and BEUMER Group were very aware of this factor and made sure to plan the installation and commissioning of the baggage handling system to be sure it was ready on time,” Schäfer adds. 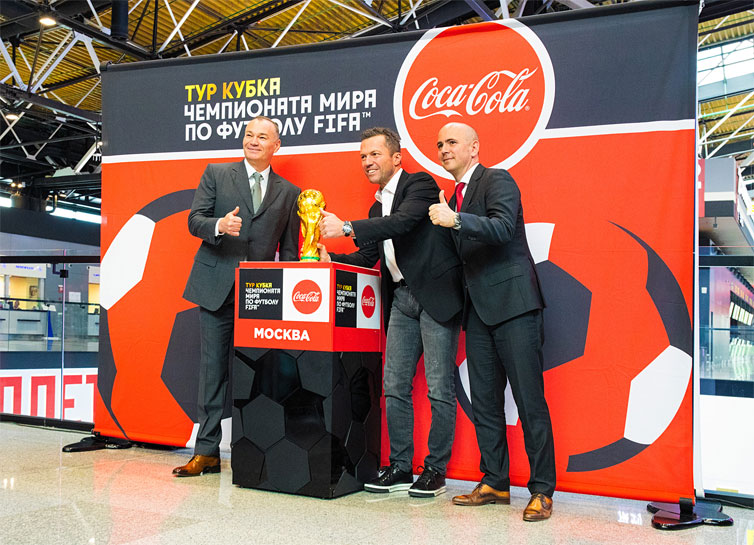 Sheremetyevo welcomed the FIFA World Cup trophy ahead of the tournament. It was presented to staff and guests by Alexander Ponomarenko, Chairman of the Board of Directors of JSC SIA (Sheremetyevo International Airport); Lothar Matthäus, captain of Germany’s 1990 FIFA World Cup champions; and Mikael Vine, Project Manager of the Coca-Cola System in Russia for the 2018 FIFA World Cup preparations.

The next stage in Sheremetyevo’s development programme is the new Terminal C in the Northern Terminal Complex. Construction is underway on the first phase – 118,000sqm – which will provide an annual capacity of 20 million passengers when complete in 2019. The second phase will see the addition of a further 86,000sqm, increasing Sheremetyevo’s total annual capacity to 80 million. 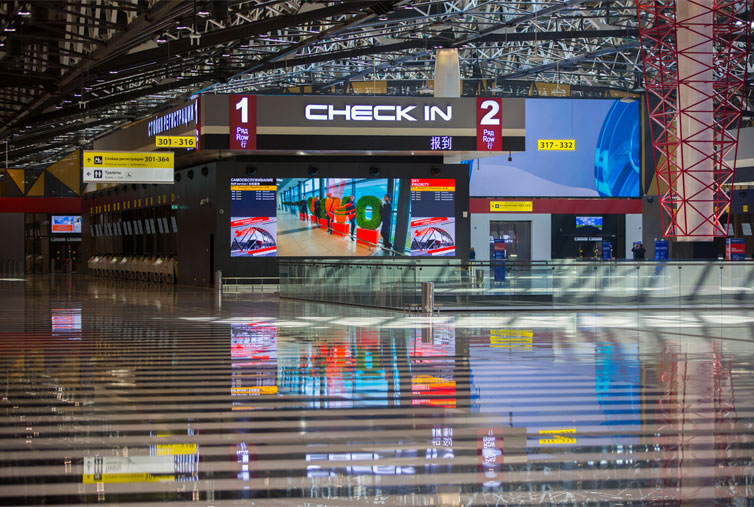 Terminal B is visually striking, with the architectural concept developed by the Serbian division of British firm RMJM being based on the aesthetics of Russian Constructivism.

“Thanks to the inter-terminal passage, it won’t take our passengers much time to reach any terminal. It has reduced connecting time to 50 minutes, which is especially important for the effective transfer operations of Aeroflot,” Vasilenko explains. “The design of Terminal C will be based on the same aesthetic solutions that were implemented in Terminal B. At the same time, reconstruction of the apron, and parking facilities, is ongoing. The parking will be linked with Terminal C by a pedestrian walkway.”

The new facilities will transform Russia’s largest airport into a convenient and efficient passenger and cargo hub, a strong competitor among leading hub airports in Europe, and a driver of social and economic growth in Moscow and the wider region.