Online travel business Kiwi.com has launched NOMAD, an enhancement to its Multicity feature that will enable users to fully automate the routing of their trip to multiple destinations to create the biggest savings.

The Multicity feature was introduced last year. Powered by Kiwi.com’s proprietary algorithm, it allows users to automatically combine flights from nearly 700 airlines, many of them budget carriers that do not normally collaborate with each other, into a single itinerary in a process called “virtual interlining”.

According to Kiwi.com, industry surveys show that its solution is on average 28% cheaper than the competition, and in some cases, the savings can be as high as 90%. The new feature takes that a step further by also automating the routing of a customer’s trip. 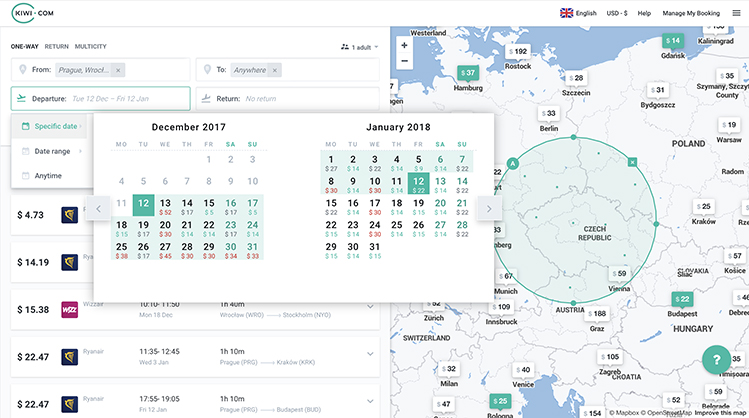 The Multicity feature was introduced last year. Powered by Kiwi.com’s proprietary algorithm, it allows users to automatically combine flights from nearly 700 airlines, many of them budget carriers that do not normally collaborate with each other, into a single itinerary in a process called “virtual interlining”.

The goal of NOMAD is to provide Kiwi.com users with a better experience when planning trips with two or more stops. When a user plans a complex trip, Kiwi.com will provide them with the option to stop over at multiple destinations along the way. Instead of requiring the customer to choose the order of those destinations, Kiwi.com will shuffle those stops to arrive at the most inexpensive itinerary possible.

“At Kiwi.com we are always looking to eliminate the pain of planning multi-city itineraries for users who are traveling alone, on business or with groups, while providing those itineraries at the most competitive price,” says Oliver Dlouhý, founder and CEO of Kiwi.com. “Imagine being able to book a roundtrip flight from Prague to London, with stops in Paris, Rome, and Stockholm for the very low price of €131. By using NOMAD that is now within the power of the user.”

Meanwhile, when connecting the unconnected, the challenge of baggage often comes up. Kiwi.com has been working on a hassle-free solution for its customers flying with two or more unconnected airlines to eliminate the stresses of re-checking luggage.

In May 2018, Kiwi.com hosted a two-day workshop with travel industry experts and representatives of major European airports at its Brno headquarters. During the workshop, the challenge of virtually interlined baggage was discussed. Kiwi.com presented its first virtually interlined baggage trial, the first step towards a global solution to eliminate the need to recheck luggage, keeping it airside.

In an effort to tackle this issue, Kiwi.com came up with and tested a process which has the potential to become a global solution for virtually interlined combinations. The test run took place at Berlin Tegel Airport, where Kiwi.com trialled its virtually interlined baggage solution with specific airline combinations and routes. Kiwi.com provided support to the airport in terms of customer support and bag identification.

During the trial, Kiwi.com tested collaboration with external parties and the communication flow with customers. Customers were excited about such a service, and so were the attendees of the workshop in Brno. Johannes Mohrmann, Senior Manager Key Account & Business Development, Berlin Airports, said: “[We enjoyed] very productive sessions on connecting air traffic with high level industry experts in lovely Brno.”