The power of a good idea 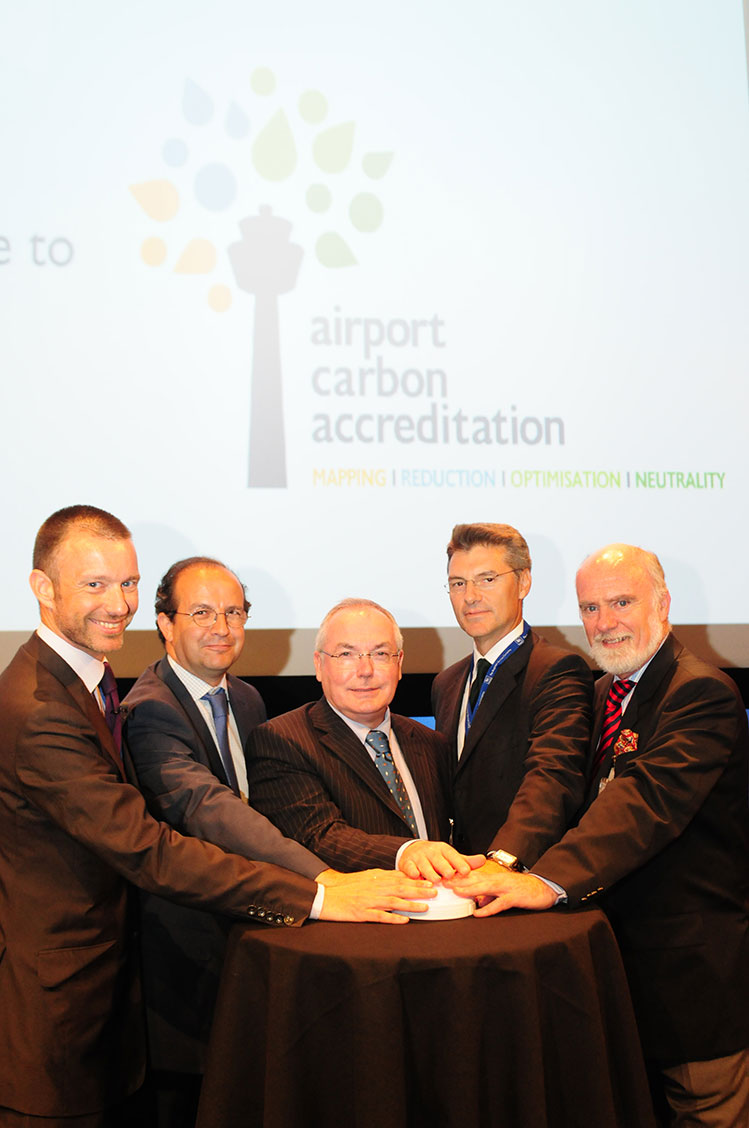 Next year will mark the 10th anniversary of the launch of the Airport Carbon Accreditation programme.

This summer marks ten years since a certain promise was made – the first piece of paper by European airports not just committing them to addressing their carbon emissions with the ultimate goal of becoming carbon neutral, but also to get ACI EUROPE to deliver a proper tool – within a year – that would help make it a reality. Marina Bylinsky takes a look back at the journey so far and ponders the road ahead.

It’s actually next year that we will mark the 10th anniversary of the launch of the Airport Carbon Accreditation programme. But the real work started a decade ago, when it went from being an idea on paper, to something that we had to deliver. Climate change resolutions were not uncommon at the time. In communications terms, the big thing was to have a target number you could mention and of course, a deadline. Interestingly, we had neither. We just had the substance that an actual tool would be developed and delivered within a year. A leap of faith, based on the philosophy of “if you build it, they will come”.

And make no mistake, a lot of work went into developing it – all at a time, when the global economy was turning and economic & financial turmoil would ensue. Objectively speaking, not the best circumstances in which to get people and companies to prioritise the environment. But nevertheless, we persisted, with the help of some courageous airports who were willing to pilot the programme.

Fast forward to today. They are all over the world. Almost every second air passenger is travelling through them. They map and calculate, reduce, engage and compensate to keep their emissions in check. They are the 237 Airport Carbon Accredited airports worldwide. It’s all about being a responsible business operator, caring about its impact on the global environment, while being a good neighbour to the local communities. It’s about making continuous efforts to become better and better, having the courage to set ambitious objectives, and guiding the innovation to achieve them.

That’s probably also where the analogies between the members of the Airport Carbon Accreditation community stop. They are small and large, commercial hubs and general aviation airports, situated in the biggest countries of the world and in the small island states. Each of them is at a different stage in its carbon management journey. Airport Carbon Accreditation provides a general framework and beacons, but the exact path is charted by each airport individually, as is its pace of progression. 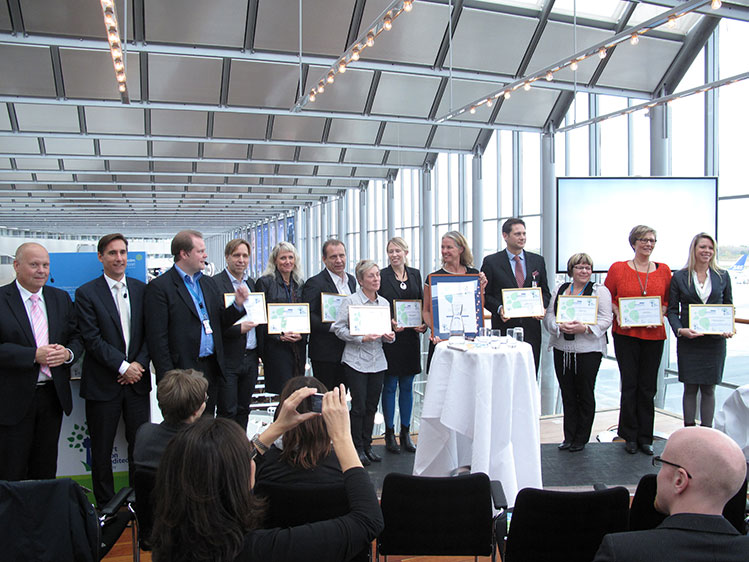 A landmark moment for airport climate action when all 10 of Swedavia’s airports became Airport Carbon Accredited as carbon neutral, in 2012.

Airport Carbon Accreditation is first of all about understanding your emissions. What are the sources and how much do they emit? And which of them can I influence? Once this understanding is achieved, the next step is to reduce emissions from those sources that the airport operator controls. For instance, the lighting and heating of terminal buildings, or the fuel used in airport ground vehicles. This means identifying actors and targets, defining priorities and actions, and then proceeding with the implementation. Once the airport operator is confident about having reached a good level of addressing these emissions, the next step is to look beyond their boundary and also reflect on ways to involve other stakeholders, in particular airlines or ground handlers, in their efforts to reduce emissions. The ultimate objective of these efforts is to achieve zero emissions from airport operations or, in other words, carbon neutrality. This is a very ambitious goal and, in most cases, an impossible one to reach without external help. While airports can make efforts to switch from fossil fuel and conventional electricity to zero carbon sources, there will still be sources of incompressible emissions, such as emergency power generators, or firefighting vehicles, for which more sustainable alternatives are not available yet. Therefore, to become carbon neutral, the residual emissions that an airport cannot reduce have to be compensated. This usually happens by investing in carbon reduction projects in other sectors.

I think it’s fair to say that Airport Carbon Accreditation has clearly exceeded the expectations raised upon its launch. From an exploratory initiative that began with 17 of the environmentally most advanced airports in Europe in the first year (2009-2010), it has become a global industry standard for airports all over the world, winning praise from the most authoritative institutions in the area of aviation and climate change, such as the United Nations Framework Convention for Climate Change (UNFCCC), the International Civil Aviation Organization (ICAO), the European Commission and the US Federal Aviation Administration (FAA). Airport Carbon Accreditation could come so far thanks to two main reasons. 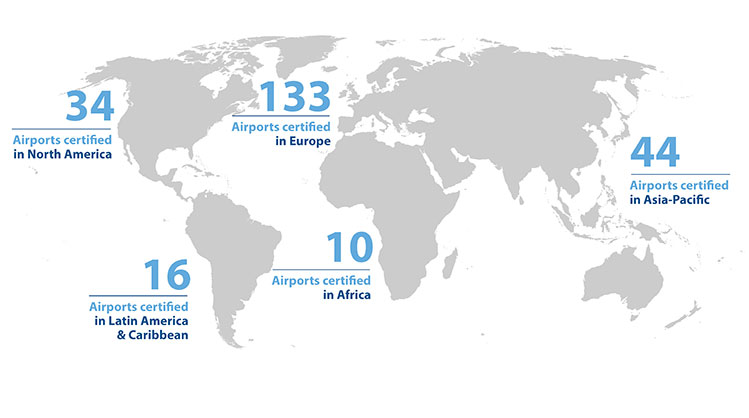 A map of the number of airports that are Airport Carbon Accredited in each world region.

Firstly, its methodological robustness and relevance for airports came as a big advantage. It is based on international, cross-industry standards for emissions management – translated into airport language. There are actually many airports for whom Airport Carbon Accreditation was the starting point for developing and continuously improving their carbon management.

Secondly, by showing year on year quantified results in terms of emissions reductions, the programme is proving its effectiveness. In the last programme year (May 2017-May 2018), European airports alone have reduced their emissions by 163,277 tonnes of CO2, a 7.6% reduction compared to the baseline. And what about that ultimate objective of reaching carbon neutrality?

So, as Airport Carbon Accreditation approaches this anniversary moment, there are certainly many reasons to celebrate the programme’s success, but it is also the right time to reflect on what it can do more or better. Airport emissions are estimated to represent 2% to 5% of the global aviation emissions, which are on the rise. In Europe alone, CO2 emissions from aviation are expected to increase by 44% by 2035, compared to 2005. While Airport Carbon Accreditation requests from its participants at the highest accreditation levels to engage with third parties, including airlines, to help them reduce their emissions too, it will be important to analyse whether the programme can provide greater incentives to do so.

Furthermore, the Paris Agreement will enter into force as of 2020, raising another key question: are airports providing their fair share of contribution to the objectives of the Agreement, i.e. limiting global warming to below 2°C and aiming to reach 1.5°C? And is there anything Airport Carbon Accreditation can do to further stimulate airports to reduce their emissions accordingly?

We also need to ask ourselves whether airports all over the world are equally empowered to take action against their emissions. Depending on the region they are located in, airports have different emissions reduction opportunities. For instance, access to sustainable alternative fuels or electricity generated from renewable sources is not equally developed in all countries. Airport Carbon Accreditation could help raise awareness amongst authorities in this regard. Policy-makers are likely to have such expectations for airports in their constituencies too. Questions such as: “Why are some of my country’s airports not yet accredited?”, or “Why doesn’t my country have any carbon neutral airports?” could help identify relevant policy interventions, opening up new opportunities for airports to reduce emissions – that other sectors could ultimately also benefit from. To create such a dynamic, Airport Carbon Accreditation probably needs to achieve even more uptake and visibility, stimulating more open source-thinking and knowledge-exchange.

Watch this space, to see how a simple idea can continue to prompt even more of them.

Marina Bylinsky is the Head of Environmental Strategy & Intermodality at ACI EUROPE. For more about climate action by airports, visit www.airportCO2.org