2017 was a challenging, yet triumphant year for Tallinn Airport, when it undertook myriad expansion projects to ensure its readiness to respond to growth, while maintaining exceptional levels of customer service. An interview with Piret Mürk-Dubout, CEO Tallinn Airport, by Marta Dimitrova. 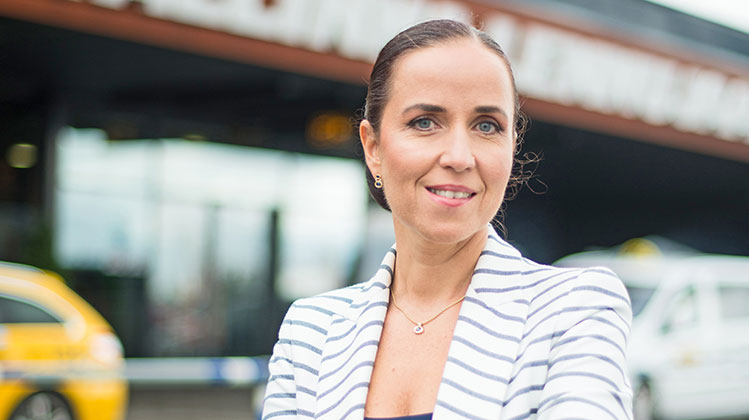 Piret Mürk-Dubout, CEO Tallinn Airport: “Sometimes being small has its advantages – it is easier for us to work with our operators, adapt where needed and introduce improvements based on customer feedback.”

To put these figures into perspective, it’s worth noting that the overall passenger volume growth during the preceding ten years was approximately 500,000 passengers in total.

The airport authority had to accommodate the substantial increase in passenger numbers, while also facing extensive reconstruction and renovation projects both landside and airside, and also acting as the main gateway for entering Estonia during the country’s EU Presidency in the second half of the year.

“The main reason for our success can be attributed to this ‘golden era’ in global aviation – demand was driven by the supply of seats provided by the airlines, and affordable ticket prices introduced completely new segments to the passenger mix,” explains Piret Mürk-Dubout, CEO Tallinn Airport.

Among the airport’s greatest achievements during 2017 was attracting British Airways to its portfolio, while this year it has already added Wizz Air. Meanwhile, the main growth-drivers remain Nordica/LOT Polish Airlines and airBaltic.

The airport is continuing steady growth this year, and in April passenger numbers increased by 17%. Mürk-Dubout is positive that double-digit growth will be maintained throughout 2018.

“According to the current outlook, we could be breaking the 3 million passenger threshold for the first time ever this year,” she enthuses. “It is an amazing achievement considering that during 2006-2016 the airport’s total passenger volume increased by 500,000 passengers and last year alone we grew by more than 420,000 passengers. Coping with this increase is a great challenge, but we are feeling confident thanks to the superb results we achieved last year.”

Attracting more traffic and expanding connectivity is essential for maintaining growth. The airport is working closely with the Estonian Tourism Board to identify which markets could bring more inbound tourism to the country. A current focus is the Middle East, where Mürk-Dubout says she sees “great potential as a hub for both business and leisure travellers”.

Tallinn offers a variety of incentive programmes to promote air traffic and to encourage airlines to expand their flight operations to the airport. It’s clearly a challenge for an airport with a smaller catchment area and with longer flights to and from European capitals to attract its “dream list” of airlines and routes. However, with the right tools Tallinn has been successful at winning new airlines and encouraging existing partners to launch new routes and expand their networks. “The living standard in Estonia has been increasing consistently and this has made us appear more attractive as well as to international carriers,” Mürk-Dubout explains. “Still the tourism potential of the country remains somewhat locked and thus we put considerable effort into promoting Estonia as a tourism destination to airline customers.”

An array of development projects was completed in 2017, such as the expansion and reconstruction of the airside traffic area, extending the runway from 3,070m to 3,480m and replacing the runway cover. Another highlight is the extension of the airport’s passenger terminal to accommodate a new state-of-the-art pre-flight security screening checkpoint, provided by Vanderlande, doubling capacity during peak hours. The extension also houses the new VIP centre, which served over 1,000 international delegates during the EU Presidency in the second half of the year – a figure even more remarkable considering that Estonia’s EU Presidency term was brought forward by six months due to the UK referendum on leaving the EU. 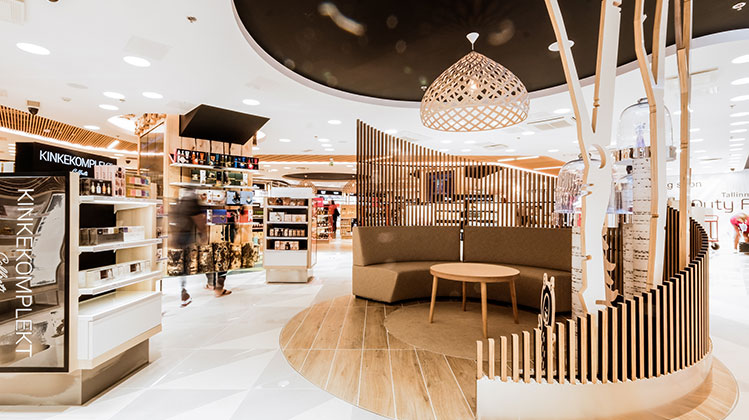 The new shopping area at Tallinn Airport, operated by Baltona, consists of a walkthrough design concept, which highlights elements of Estonian nature, while also blending in seamlessly with the design theme of the airport’s new checkpoint.

Access to the airport improved considerably when the new tramway linking the airport’s passenger terminal with the city centre was completed last September. Passengers can now take the tram from the city centre to the airport in 15 minutes and walk from the public transport centre to the departure gates, thanks to a new gallery connecting the terminal with the public transport station. The construction of a new multi-storey car park commenced at the end of 2017 and will be completed at the end of 2018. The car park will accommodate 1,200 vehicles, making it the largest car park in the entire country.

Service quality and ‘sense of place’

The shopping area at Tallinn Airport had been under development since the beginning of 2017 and the new duty free shop operated by Baltona was launched in May. While there has been on-site building going on with shops and cafes being relocated, concession revenues at Tallinn Airport increased by 11.3% in 2017. Moreover, the airport’s business lounge was recognised as European Lounge of the Year by Priority Pass.

“We aim to combine two key objectives in our passenger experience – to be the cosiest airport, while promoting Estonia as a tourism and business destination,” Mürk-Dubout explains. “Therefore, in terms of retail and food & beverage development we focus on our service quality, ‘sense of place’ and a satisfying variety of goods and services.”

Baltona’s walkthrough design concept highlights elements of Estonian nature, while also blending in seamlessly with the design theme of the airport’s new checkpoint. “Sometimes being small has its advantages – it is easier for us to work with our operators, adapt where we needed and introduce improvement based on customer feedback,” Mürk-Dubout adds.

Handling the record-breaking passenger volumes without compromising on service quality is a main ambition for the airport, and Tallinn is already taking measures to deal with further growth hikes in the future to avoid a capacity crunch.

“We are currently conducting a feasibility study to understand the future expansion possibilities of our passenger terminal and other facilities. And while these double-digit growth numbers may not continue forever, we still need to futureproof ourselves in order to remain resilient to adversities in these agile times.”