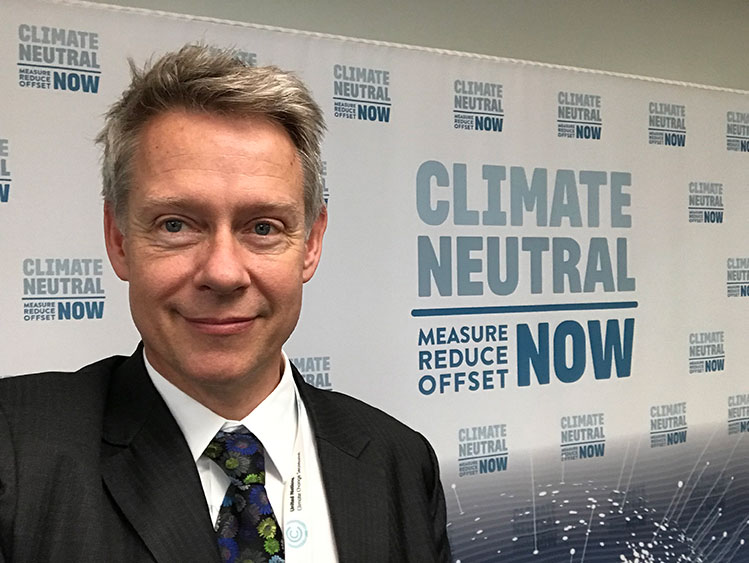 Niclas Svenningsen, Head of Strategy and Relationship Management, UNFCCC Secretariat: “Mobility is absolutely essential for us. We simply wouldn’t be able to deliver our work on climate without the ability to travel.”

How did you become involved in the fight against climate change?

In my past life, I have spent 10 years living in Asia. While travelling in this region, I had too many opportunities to witness the negative sides of human impact on nature, such as deforestation, waste spread over acres of land, skyrocketing levels of air pollution, difficult access to clean water, etc. These issues were not per se climate-specific, but they have channelled my interest in the matter. During the many hours spent in traffic jams on my daily commute, I had enough time to come to a realisation, that we can’t go on like this. I wanted to be involved specifically in Climate Action, seeing it as the most pressing matter. At the time, I was working at UN Environment but after a while I had the opportunity to more exclusively focus on climate action by joining the United Nations Framework Convention on Climate Change (UNFCCC).

What exactly is the role of the UNFCCC and how does it facilitate progress on this issue?

The United Nations Framework Convention on Climate Change is an international convention set in 1992, whose main focus is on limiting the impact of human interference on Earth’s climate system. Our initial task, that took us quite a lot of time, was to develop a blueprint on how this global reduction of greenhouse gases could be achieved by the signatory countries. In fact, this blueprint was only finalised in 2015 and is known widely as the Paris Agreement. 195 countries worldwide have signed the Agreement so far. The deal aims to limit the increase of global average temperature to well below 2.0°C, through Nationally Determined Contributions (national climate action plans), but also through ‘bottom up’ action, driven by the private sector, civil society, local communities and individuals. Our mission now also includes to encourage all these stakeholders to take immediate and continued action to reduce the collective carbon footprint.

Given the growing pressure and the reaction to the US withdrawal from the Paris Agreement, are you still optimistic that the signatory countries will meet the targets?

I am, actually. The US Government is completely alone in this decision. The announcement of Donald Trump, that he would like to withdraw the United States from the Paris Agreement spurred a completely opposite result to weakening it. The one country that until then refused to sign the agreement, namely Nicaragua, put pen to paper almost immediately. Also in the US, numerous stakeholders, including states, cities, private companies and influential individuals, have pledged to step up their climate action in the absence of leadership of the Trump Presidency in this regard.

What are the industries which, through their own voluntary actions, are making a particularly positive contribution?

We can observe a range of initiatives spanning across different sectors, that bring climate action forward. There are sectors that have quite large footprints, such as transport, energy, construction, but which invest a lot in climate solutions and are eager partners of our efforts. Notably, one such initiative that comes to my mind is Airport Carbon Accreditation, the voluntary climate action led by airports worldwide. This is a great example of an industry push towards low carbon economy, that forms an important part of the overall solution.

I would say that it’s motivation. We have all the technologies we need to be able to keep the average global temperature well below 1.5 degrees, but we just need the push from governments and individuals to use them. There are of course a couple of innovations, that may become major breakthroughs in the way we do things. I’m thinking here about the hydrogen economy or solar powered flights, but I’m also convinced that we shouldn’t wait for them. Motivation is the most important factor, because it drives habits, and as we know, good habits can reduce the effort to accomplish something by far.

How do you see the role of mobility within the realm of climate action, especially in the context of organising the annual Conference of the Parties? How could we better embrace the opportunities it brings about?

Mobility is absolutely essential for us. We simply wouldn’t be able to deliver our work on climate without the ability to travel. As inevitable as it is, staff travel and that of the delegates coming to our conferences constitutes the biggest bulk of our carbon footprint as an organisation. UNFCCC is already climate neutral since many years, and in fact, the entire UN system plans to become fully climate neutral by 2020. Going climate neutral means that we measure our climate footprint, proactively seek to reduce it, and offset what we are not able to avoid. For instance, we do encourage the use of online platforms for meetings, and we do support climate neutral policies in terms of ways of working. Regarding the offsets we use, we have our own UNFCCC-supported, Certified Emission Reduction units (CER), which are developed under the Clean Development Mechanism. These projects have a vast range of application, including support of sustainable travel options, wind and solar energy generation, implementation of clean cook stoves, etc. 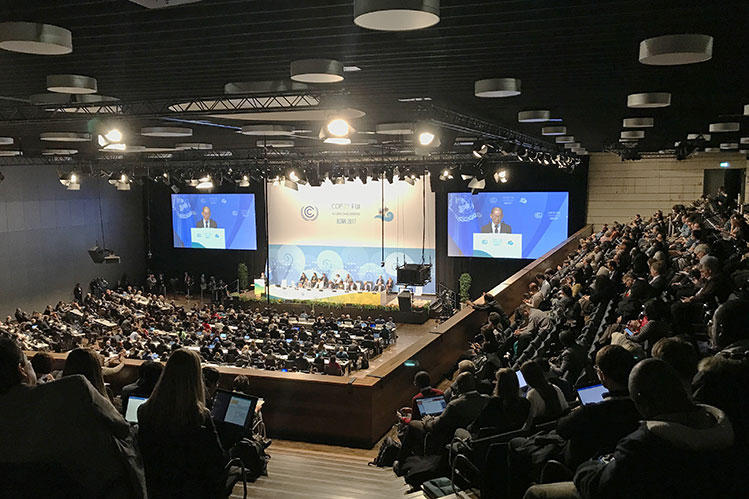 Niclas Svenningsen, Head of Strategy and Relationship Management, UNFCCC Secretariat, describing the scale and ambiance of the COP meetings: “To give you a rough idea of the scale of such an event, there are over 25,000 people gathering in one place during two weeks, to participate in over 2,000 separate meetings.” Copyright: UNclimatechange

Can you describe the scale and the ambiance of the COP meetings for us?

Frankly, it’s very hectic. To give you a rough idea of the scale of such an event, there are over 25,000 people gathering in one place during two weeks, to participate in over 2,000 separate meetings. 195 countries trying to agree on something is not easy in the first place, and then you need to add a layer of political game that comes into play. Even though at times I find the process quite frustrating, I still believe that COP is the meeting place for people that care about the climate and really want to do something about it. For the representatives, the conference is also very tiring physically. The negotiations are intense and sometimes go on well into the night. For us at the UNFCCC Secretariat, the conference means literally a fortnight without sleep… Over the years, the COP conference has also evolved to include a vast array of side events. To me, this part of the conference is very interesting, because these meetings and pavilions push specific issues. For instance, we’ve had a science pavilion put in place by NASA, a high-tech pavilion brought by India, etc. At last year’s conference, there was an airport-specific event as well, relaying the role of airports in forging a more sustainable air travel.

We are most of the time talking about stopping the change, but it cannot be done without implementing… changes. What change are you most looking forward to?

Personally, I really look forward to climate neutral travel. I think we are on the right track to implement solutions for local transport, for example, with the non-fossil fuel-based rail getting closer to realisation. At the current pace of action and innovation, I’m sure that the aviation industry will follow through shortly, especially with initiatives such as Airport Carbon Accreditation paving the way. Further to my wish list, I think there is still more to be done in terms of online communication. A really good online conferencing tool has yet to be developed. There are some solutions on the market, but conducting an efficient meeting with more than 10 participants is quite difficult, let alone 25,000.

Lastly, I would like to see a shift to a culture of increased consumer awareness. In my view, the different industries should provide consumers with a panoply of more sustainable products and services and to inform their choices. Once this culture shift takes place, the critical mass of individual, smart choices will create an unstoppable tide of positive change.