To deliver on their commitment to fight Climate Change, airports worldwide are rolling up their sleeves and intensifying their efforts. More airports than ever are engaged in the Action for Climate, something which didn’t go unnoticed during the recent COP23 in Bonn. Agata Lyznik reports on the latest progress.

Governments from across the world gathered last month at COP23 in Bonn to continue the Global conversation about sustainability and climate change. Airports and other air transport stakeholders were invited to share their experience of curbing CO2 emissions at a dedicated side-event. Aviation is the world’s first sector to set ambitious global CO2 emissions reduction targets and airports have long been leaders in optimising their operations with carbon reductions in view and influencing others to do the same. The panellists, even though representing airports of different sizes and locations, agreed that the efforts put into reducing their CO2, in addition to being good for the environment, led to new levels of energy savings and employee engagement. Creating these efficiencies is at the heart of Airport Carbon Accreditation, the programme empowering airports to address their emissions since 2009. Airports’ intensified climate action can be best gauged by the rising number of participants in the programme, which in October broke the record of 200 accredited airports worldwide.

The honour of becoming the 200th accredited airport went to Townsville Airport in Australia, whose advanced carbon management was recognised with a Level 2 Reduction certificate, straight off the bat. The 200 airports milestone coincided with the announcement of the results for Year 8 of the programme. As is customary at this time of the year, Airports Council International (ACI) released the annual report of Airport Carbon Accreditation, showing how the global airport industry is delivering on its commitment to lower its own CO2 emissions, made in 2007. On the occasion of the release, Niclas Svenningsen, who heads the Climate Neutral Now initiative at the UNFCCC Secretariat in Bonn, Germany, commented, “People are aware of the public conversation about Climate Change between governments and the work underway to forge and implement policies that support a sustainable future, but effective climate action also relies enormously on an innovative and proactive private sector – and Airport Carbon Accreditation is a really good example of that. By providing a clear, yet ambitious framework that accommodates the multi-speed nature of airports’ efforts across the world, this is actively encouraging and stimulating a collective effort by the Global airport industry – one that is also engaging other aviation stakeholders to get involved as well. Something other industries and sectors would do well to try to foster.”

According to the annual report of Airport Carbon Accreditation, the programme has seen a 21% growth in participation, which stood at 189 accredited airports at the end of the reporting period (May 2016-May 2017), compared to 156 airports last year. The amount of CO2 they collectively reduced this year amounted to 202,184 tonnes – equivalent to the CO2 emitted during the lifecycle of 2.1 million iPhones.

According to the report, the programme has seen a 21% growth in participation, which stood at 189 accredited airports at the end of the reporting period (May 2016-May 2017), compared to 156 airports last year. The amount of CO2 they collectively reduced this year amounted to 202,184 tonnes. If this number doesn’t grab your imagination, perhaps over 2.1 million iPhones will! The collective reduction figure would be equivalent to the CO2 emitted during their lifecycle – including production.

This year was also marked by a new stage of carbon management maturity among the participants, with the first airports outside Europe reaching the highest accreditation level of carbon neutrality. Under Airport Carbon Accreditation, carbon neutrality is defined as zero net CO2 emissions under direct control of the airport operator. To reach this level, airports must first demonstrate that they have achieved significant carbon emission reductions at the facilities they operate and have engaged other stakeholders on the airport site (airlines, ground handlers, retailers, etc.) to lower their own carbon emissions. Those efforts have been and continue to be very significant – with airports investing millions in implementing more energy-efficient infrastructure and low emissions technologies, for instance through fleets of electric cars and buses, photovoltaic parks, LED light bulbs and much, much more. It is only once such measures have been implemented that airports can move to carbon offsets to compensate for their residual emissions. 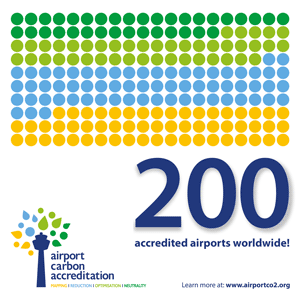 As an increasing number of airports are now certified at Level 3 Optimisation – many are considering becoming carbon neutral (Level 3+) – the moment where carbon offsets come into play. With some evolution and enterprise in the area of climate action and carbon offsets over the past 10 years, there is a need to ensure that the rules for offsetting are robust. In this view, ACI has commissioned a study to better comprehend the carbon market and eventually update the programme guidance of Airport Carbon Accreditation. Currently, the programme relies on carbon offsetting standards whose use has been approved by the programme’s independent Advisory Board, which includes the UNFCCC, ICAO, the European Commission (DG MOVE & DG CLIMA), ECAC and others. These standards include the Clean Development Mechanism of the UNFCCC, the Verified Carbon Standard, the Gold Standard and the Climate Action Reserve.

However, with the evolution of the carbon offsets market, a qualitative review seems timely. An environmental policy consultancy, Ecofys, has been tasked with preparing the quality assessment of offsetting standards and project types. Marina Bylinsky, Head of Environmental Strategy & Intermodality at ACI EUROPE says “The comprehensive assessment by Ecofys is something we have commissioned with a view to strengthening the programme’s requirements – especially in relation to offsetting project types. We have never said that the programme is set in stone – it is evolving, and just like the Global climate action effort, it is a learning curve for us at ACI and for airports. Over the past 8 years, climate action by airports has become the norm and they are getting more ambitious about what they can do. The study currently in development will help drive that further.”

As of 28 November 2017, 208 airports worldwide are currently Airport Carbon Accredited at one of the four available levels of the programme. These airports welcome 2.9 billion passengers a year, which makes for 41.5% of the global air passenger traffic. 35 of them are carbon neutral.
Visit www.airportCO2.org to find out more.