It is certainly an exciting time to enter the air transport industry in the UK, with the government planning to start working on a new Aviation Strategy this year and, of course, the forthcoming negotiations for the UK’s exit from the EU.

It is against this backdrop that Karen Dee took over as the new Chief Executive of the UK Airport Operators Association (AOA) in March. “Theresa May’s surprise announcement of a General Election on 8 June has meant that some of the more detailed discussions with politicians and civil servants have been put on hold, so I’ve had a bit more time to spend with our airport members, to get to know them and understand more about their operations,” she explains. “Aviation is such a dynamic and competitive sector – I’ve been so impressed to see how our members keep such complex facilities operating smoothly.”

Dee brings a wealth of experience in the transport sector. Her previous roles include positions at the Confederation of British Industry, Road Haulage Association, Department for Transport and, most recently, the Freight Transport Association.

“What all of my previous roles have in common is that they have involved me in campaigns to persuade government to adopt a particular policy position or approach – or equally to persuade them not to do something,” says Dee. “While some of the detailed policy issues I’ll be involved in at AOA will be different, the overall approach will not. Perhaps the biggest learning point from these past roles is that you always need to be in a position to answer the ‘where’s the evidence?’ question that inevitably follows any request for policy change.” 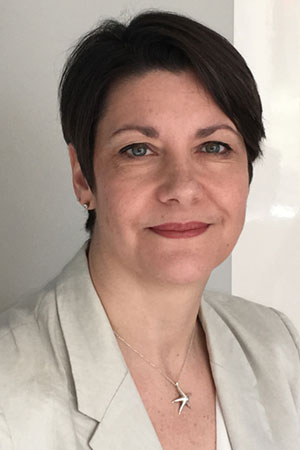 Karen Dee, Chief Executive, UK Airport Operators Association: “Clearly, Brexit is a top priority in our manifesto and we have greatly benefited from working closely with ACI EUROPE in ensuring there is a pan-European airports position on this – it’s been and will continue to be an incredibly important and valuable partnership.”

In May, AOA released its own General Election manifesto, with the UK’s aviation connectivity after Brexit a top priority. “We have greatly benefited from working closely with ACI EUROPE in ensuring there is a pan-European airports position on this – it’s been and will continue to be an incredibly important and valuable partnership,” Dee comments. “Our collective job is to convince all our governments and the EU to provide certainty as soon as possible, and demonstrate that the European aviation market benefits from close UK integration. It helps we’re unique as a sector, in that the international agreements already in place can be models for what we want to achieve.”

Clearly, aviation is critical to the success of the UK economy and for society generally, and Dee adds that there is a real understanding in government of the importance of aviation for the UK – 73% of visitors to the UK arrive by plane and 40% by value of the UK’s exports travel by air.

The second key priority in the manifesto is the Aviation Strategy, which the outgoing government had begun developing. “We need a fair framework for growth across all UK airports, enabling them to provide the connectivity the UK needs as it seeks to forge a new path post-Brexit. That includes, very importantly, significant investment and improvement in surface access.”

A linked priority is the completion of ongoing work on airspace modernisation, which is increasingly urgent with one in three planes expected to depart more than 30 minutes late by 2030.

Meanwhile, the UK will need a competitive aviation sector to ensure British business can take advantage of the opportunities of Brexit, and Dee stresses the need to reduce Air Passenger Duty, which is more than double that of the few other EU countries that charge it. This puts UK airports at a significant competitive disadvantage.

“Aviation policy in the UK has suffered from quite a bit of stasis in the past few years and finally we saw some clear steps forward – we need to get the new government to continue to make those steps. That includes progress on the Brexit negotiations, which are critical, and that means we will be gathering more evidence to make our case for a strong agreement – in close discussion with ACI EUROPE, of course,” Dee concludes.