The airport experience of tomorrow is being defined through a variety of technologies, from biometrics and beacons to mixed reality headsets. Report by Ryan Ghee.

HoloLens, which runs Windows 10, enables users to engage with digital content and interact with holograms in the world around them. SITA Lab has been working with Helsinki Airport to use the device to reproduce the airport operational control centre (AOCC) in a mixed reality environment.

In the initial stage of the project, SITA Lab used a feed from SITA’s Day of Operations technology, which is used by Helsinki Airport, and created a new way to visualise and interact with the airport’s operational data, including aircraft movement, passenger movement and retail analytics. Wearing the HoloLens headset, the operators had a set of screens meshed into a 3D view of the airport, allowing them to correlate events from the data dashboards with an immersive real-time model of the airport.

HoloLens also opens the possibility of being able to access the AOCC environment from any location, on or offsite, allowing experts to provide input to situations remotely.

“Mixed reality, which combines augmented and virtual reality, is more than a new interface, it is a new way of looking at the world and allows things to be done in a new way,” says Jim Peters, SITA CTO and head of SITA Lab. “It enables digital and physical data to exist together. Our early research shows that there are potential uses for airlines and airports – for operations, maintenance and training. We need to learn how to interact in this new environment. In the same way that we moved from computers to smartphones and voice recognition, now we can go beyond the screen.”

Greg Jones, Managing Director, Worldwide Hospitality & Travel, Microsoft Corporation, adds: “HoloLens is now being used across various enterprises from healthcare to engineering. SITA’s work is an example of how to extend HoloLens capabilities to manage the complexity of data and decision-making in an airport environment. It shows how this new technology can be harnessed for the air transport industry and add value in areas from training to complex operational management.” 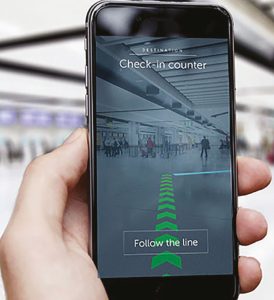 By communicating with mobile apps, the beacons can accurately locate where a passenger is in the airport and provide them with blue dot indoor navigation and augmented reality wayfinding.

As part of its £2.5 billion (€2.9bn) transformation programme, London Gatwick Airport is embracing technological innovations as it seeks to simplify the passenger experience and optimise operations.

Abhi Chacko, Head of IT Commercial & Innovation at Gatwick Airport, explains that the installation of 2,000 battery-powered beacons has now been completed. Although the airport has led the project, it is perhaps the airlines and their passengers who stand to gain the most.

The beacons have been installed across the North and South terminals. By communicating with mobile apps, they can accurately locate where a passenger is in the airport and provide them with blue dot indoor navigation.

Additionally, the beacon system also enables an augmented reality (AR) wayfinding tool, which allows passengers to use the camera function on their device to view AR directions to check in areas, departure gates, baggage belts, etc.

“We wanted to enable indoor navigation on mobile apps, similar to road navigation on Google or Apple maps, but GPS doesn’t work well indoors due to a lack of satellite signals,” says Chacko. “We deployed about 2,000 battery-powered beacons in early 2017 and we are now able to provide a reliable indoor blue dot service to app developers. This is much more reliable than GPS and it can be used in airport apps, airline apps, and other third-party apps.”

Chacko explains that Gatwick chose battery-powered beacons to reduce costs, logistical complexity and deployment time. In fact, all of the beacons were installed in just three weeks, before two months were spent calibrating the blue dot and testing the accuracy of the wayfinding.

Gatwick Airport has worked with London-based Pointr Labs on the project. The company’s CEO, Ege Akpinar, outlines more of the benefits of the system: “From day one we’ve focused on the computer science aspects of it, so it doesn’t use too much battery, it’s multi-platform, and it’s accurate throughout all publicly accessible areas of the airport. We’ve seen airports that are installing loads of sensors – as many as 10,000 sensors – but we can use much fewer beacons and that’s all thanks to the clever software that we’ve developed.”

The Entertainment Gate can be found between Gates B44 and B48 in Frankfurt Airport’s Pier B.

A huge LED video wall has been installed in Frankfurt Airport’s Pier B in the area between Gates B44 and B48. The 180-degree convex video wall, which measures 21m x 1.6m, displays a variety of video content, ranging from airport operations to destination previews.

One film, for example, shows the journey of a suitcase from the check-in counter through the maze of underground tunnels and baggage conveyors to the airport apron and from there into an aircraft’s belly. Others highlight visuals from major cities, like New York and Tokyo across the entire screen.

“The video wall innovatively enriches our broad entertainment and information offering for passengers,” says Thomas Kirner, Head of Fraport AG’s Service Quality Department. “The spectacular installation creates a genuine ‘wow effect’ and turns the time that travellers spend waiting in the gate area into an experience to write home about.”

The Entertainment Gate, as Fraport has named it, is part of the airport’s initiative to add new services and facilities, while improving existing ones, to enhance the customer experience at Frankfurt Airport.

A shift towards smarter self-service solutions

Recently, Dublin Airport increased its installation of self-service bag drop (SBD) solutions to 118 units, making it the world’s biggest installation yet. eezeetags contributed to this having already collaborated with other airports worldwide.

Borry Vrieling, founder and Managing Director, explains that eezeetags is also experiencing a lot of interest from the Latin American market. “There is great cooperation with more and more printer manufacturers to help them become eezeetags certified. This makes a bigger choice for SBD vendors to find the printer that matches their design,” he says.

By providing a seamless, contactless passenger flow through all checkpoints, Vision-Box’s innovative solution, Seamless Gateway, eases congestion throughout the airport, while offering a contemporary travel environment for passengers.

Advancing the concept of the non-stop and contactless airport passenger journey, Vision-Box, a leader in passenger experience and automated border control solutions, has unveiled its latest industry innovation, Seamless Gateway, in collaboration with Amsterdam Airport Schiphol.

“This year, we are proud to unveil Seamless Gateway, a brand new concept that literally allows a passenger to go through checkpoints without stopping and heralds a revolution in the dynamic between passenger, airport, airlines and border authorities,” enthuses Miguel Leitmann, CEO Vision-Box.

So how does it work? As passengers cross the airport and information is collected in the Passenger Data Envelope (PDE), a pluralist, info-driven, data stream portfolio is created for each individual. This data stream is used to guarantee a reliable passenger identification, real-time passenger flow monitoring, clearance exception handling, and a higher level of trust in the integrated security and border identity services.

By providing a seamless, contactless passenger flow through all checkpoints, Seamless Gateway eases congestion throughout the airport, while offering a contemporary travel environment for passengers. The one-solution approach to airport touchpoints simplifies the clearance process for passengers with an identical process throughout, eliminating confusing clearance tasks and removing the need for the passenger to interact with officers or touchpoints.

This project in collaboration with Amsterdam Airport Schiphol is an important step in the digital transformation of the airport. Wilma van Dijk, Safety, Security & Environment Director, Schiphol Group, states: “Amsterdam Airport Schiphol has been boosting innovation in every aspect that concerns passenger experience together with our partners the Ministry of Security & Justice, Royal Netherlands Marechaussee, KLM Royal Dutch Airlines, and Vision-Box. For us, modernisation goes hand in hand with innovative technology. The state-of-the-art Seamless Gateway supports us with our Digital Airport Program.”