Airports bringing the Christmas spirit to passengers around the world

It’s Christmas time and airports around the world are helping passengers find the perfect gift and get into the Christmas spirit by introducing special promotions and unforgettable celebrations, ranging from open mic gigs and fun parades to virtual advent calendars. 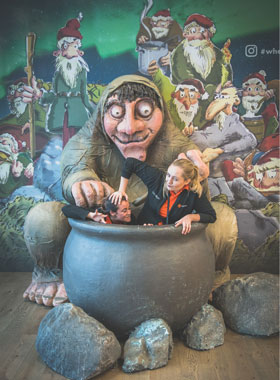 In Decemeber, the 13 Yule Lads will visit Keflavik Airport. The airport will also host a statue of Grýla, their mother, along with her pot for cooking naughty children. Passengers are welcome to take pictures of themselves sitting in Grýla’s pot while they wait.

As many countries do, Iceland celebrates Christmas mostly with good food and gifts to loved ones, but unlike most countries with a single Christmas character, or Santa Claus, Iceland children are fortunate enough to be visited by the 13 Yule Lads.

In Iceland, children are required to place a shoe in their bedroom window each evening of the 13 days before Christmas. The 13 Yule Lads, in return, give the children small gifts one after the other.

In Decemeber, the 13 Yule Lads will visit Keflavik Airport. The airport will also host a statue of Grýla, their mother, along with her pot for cooking naughty children. Passengers are welcome to take pictures of themselves sitting in Grýla’s pot while they wait.

Travellers can also see the hashtag #wheninkef on Instagram.

During the festive season at Helsinki Airport, passengers are able to meet Santa Claus, enjoy delicious mulled wine and kiss that special someone under the mistletoe as part of a social media competition. Travellers can also take part in an Open Mic gig, have their gifts wrapped at a number of gift-wrapping stations and one lucky winner of the social media competition will win a diamond ring from Kalevala Jewellery. Santa Claus is visiting Helsinki Airport between 1-23 December to spread Christmas cheer to both the older and younger travellers.

A gift generator will be moving around the airport and is not only a funny looking gadget but is also very helpful for travellers when looking for Christmas gifts. The generator assists people to choose the most personal and funniest Christmas gifts from the airport’s product range.

Santa Claus is visiting Helsinki Airport between 1-23 December to spread Christmas cheer to both the older and younger travellers.

The free gift wrapping stations, which were incredibly popular last year, will also return to the airport this year. Passengers can bring their Christmas gifts and other souvenirs to the gift-wrapping stations in the gate area on 1–23 December.

Additionally, the airport has launched the #airportkiss competition across its social media channel. For the first time this year, Helsinki Airport is decorated with romantic milestones offering ideal places to exchange a kiss and encourage its passengers to share their smooches on the social media in order to win a diamond ring from Kalevala Jewellery.

The airport’s popular Open Mic gig also returns in December, where visitors can take the stage and entertain fellow travellers with their music.

Visitors at the airport can follow Christmas at Helsinki Airport in social media using hashtags #WorkingForSanta and #WeLoveChristmas.

This Christmas, Changi Airport is the destination for all aspiring Pokémon trainers from Singapore and overseas. Pikachu and his friends have arrived at Changi Airport to delight travellers and airport visitors this holiday season, becoming a lair for the pocket monsters that have taken over the world.

Kicking off the Pokémon at Changi end-of-year festivities were 10 life-sized dancing Pikachu who wowed the fans at Changi Airport’s Terminal 3 with the first Pikachu Parade ever held in Singapore. Fans were also treated to a stunning light show with music and dancing trees, as well as soft falling ‘snow’ in the Departure Hall, where a seven-metre tall Pikachu, the largest character installation at Changi by far, welcomed visitors. From 18 November to 11 February 2017, travellers are able to enjoy special Pokémon installations and activities.

This Christmas, Pikachu and his friends have arrived at Changi Airport to delight travellers and airport visitors this holiday season, becoming a lair for the pocket monsters that have taken over the world.

Next to the Pikachu installation at the T3 Departure Hall, visitors can explore a towering Gingerbread House, get a glimpse of Santa’s Workshop and Mrs Claus’ Confectionery, which are filled with children’s toys and yummy delights.

The end-of-year festivities would not be electrifying enough without the appearance of the most coveted Pokémon – Pikachu. On weekends, up to 1 January 2017, passengers and airport visitors have the chance to be up close and personal with the adorable character at the Gingerbread House.

Additionally, at Terminal 2’s Departure Hall, passengers are able to take photos with three life-sized Snorlax who will be lounging in the Snorlax Garden.

The more adventurous Pokémon trainers and visitors can embark on a Poké Trail to hunt for 26 Pokémon waiting to surprise them at various locations across Changi Airport, and stand to win exclusive Pokémon merchandise. Visitors can also scan the QR code at each character location to find out more about the pocket monsters at the Pokémon at Changi microsite.

At the T2 and T3 Departure Halls, visitors can participate at the Z-Moves activity kiosks, or have their faces painted onscreen and transformed to look like Pikachu. This will take place at the face painting kiosks, which are making their worldwide debut at Changi Airport. Participants can also make videos of their fun moments and share them with friends and families through social media platforms at the activity kiosks. The Z-Moves activity kiosk can also be found in Terminal 1’s Departure Transit Hall.

Pokémon fans will be excited to know that they can collect and bring home a full set of nine limited-edition Pokémon plush toys available exclusively at Changi Airport. Featuring five popular Pokémon characters – Pikachu, Eevee, Bulbasaur, Charmander and Squirtle, and three new characters from Nintendo’s new Sun and Moon series – Rowlet, Litten and Popplio – as well as the Poké Ball, each of these toys can be purchased for S$9.90, with a minimum spend at Changi Airport. Changi Rewards members can also redeem the full set of the plush toys with an accumulated spend.

Passengers travelling from 1 December can enjoy the facilities of a stage shaped like a gift box, where they will be entertained with special programmes and pampered with great prizes.

Budapest Airport welcomes its passengers with a special Christmas design and prize games. This year, the time spent at Budapest Airport’s Terminal 2 is a real holiday experience. Passengers travelling from 1 December can enjoy the facilities of a stage shaped like a gift box, where they will be entertained with special programmes and pampered with great prizes. Anybody can join the prize game, all they need to do is to keep the invoice from their previous purchase and register it to the code reader placed in front of the stage. After the registration, the prize of the day appears on a virtual advent calendar.  The presents include candy canes, Christmas tree ornaments and Szamos Christmas candies.

The airport also pays special attention to the youngest travellers as they can watch continuous cartoon screenings at the airport.

In the Christmas season, the waiting time at the airport becomes really beneficial for those who find it hard to purchase gifts due to their busy schedules. Many of Budapest Airport’s stores welcome visitors with generous discounts on their products and some stores, like GiftPoint, Tech2Go, Relay, Virgin and Living Toys, joined the festive mood with special offers.