YVR 2037 Master Plan: The blueprint for a world-class sustainable airport

Vancouver International Airport has experienced myriad successes in 2016 – record traffic figures, the launch of Phase 2 of the YVR 2037 Master Plan, and recognition at Level 2 Reduction of ACI’s Airport Carbon Accreditation, being among the highlights. Craig Richmond, President & CEO of Vancouver Airport Authority, outlined the latest developments to Marta Dimitrova.

Vancouver International Airport (YVR) is Canada’s second-busiest, welcoming a record 20.3 million passengers in 2015 and on track to surpass 22 million this year. It is a key economic driver regionally and nationally, employing over 23,000 people and generating $5.3 billion in total GDP.

Effective long-term planning is, of course, essential to maintaining this strong growth and, in September, the airport launched Phase 2 of the YVR 2037 Master Plan, which Craig Richmond, President & CEO of Vancouver Airport Authority, explains “serves as the blueprint to building a world-class sustainable airport.”

“Our terminals are only designed for 25 million passengers, so this master plan will take into account how we expand the terminals, especially the supporting facilities, such as parking, so we can go from 25 million to 35 million,” he adds. “We don’t have any trouble with runways, taxiways or aprons, so we have to think about expanding the terminal. And, as always, how we get people to the airport, so ground access too.” 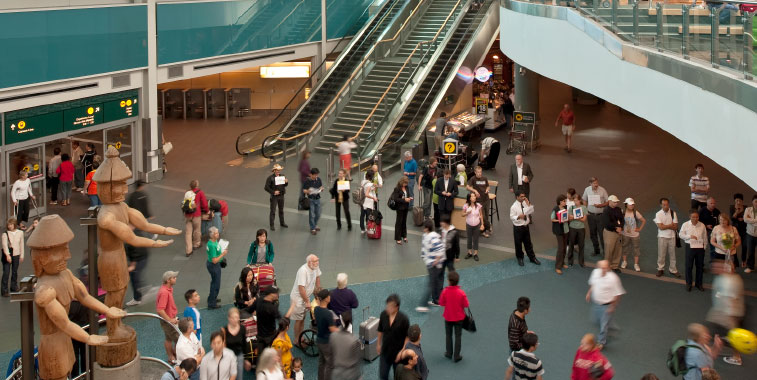 Vancouver International Airport’s efforts in providing an excellent passenger experience were recognised for the seventh consecutive year when it was voted Best Airport in North America in the 2016 Skytrax World Airport Awards.

The passenger experience is at the heart of YVR’s strategy. Working with the Canadian Border Service agency, in 2009, YVR introduced the very first non-registered Automated Passport Control (APC) kiosks – BORDERXPRESSTM. “Then we modified it, worked with US Customs and Border Protection to put it into the US side, and it took off. We’ve sold over 1,000 of these now inside the US and the Caribbean in 32 airports,” says Richmond. “We solved the problem we had, which was getting people through customs very quickly when there were not as many agents, and by solving our problem we created a product that other people want. It has been very successful. It is not only good for passengers, but also the airlines and airport, because we don’t have to expand the customs halls, so it keeps our capital cost down.”

Meanwhile, YVR is also focused on enhancing the security screening experience for travellers. It works closely with its federal partners, the Canadian Air Transport Security Authority, which is responsible for passenger and baggage screening at the country’s airports. Indeed, YVR hopes to be deploying new technology in summer 2017. “Our single biggest operational and customer service headache is line-ups getting through security. We are very keen on trying any new innovative ways to get passengers safely and securely through the passenger screening process,” Richmond comments.

As mentioned previously, the YVR 2037 Master Plan is a blueprint for a sustainable airport, and commitment to a reduced carbon footprint is core to everything the airport does.

In a significant recognition of its sustainability efforts, YVR was recently accredited at Level 2 Reduction of ACI’s Airport Carbon Accreditation. “We are quite excited about that because we just joined and skipped Level 1 and went straight to Level 2, so that was the main recognition for our efforts,” Richmond enthuses. “We are also quite pleased because, just a few months ago, we became the first airport in the world to be awarded ‘Salmon-Safe’ certification. We sit on a salmon river – Fraser River – and we make sure our river stays very hospitable for salmon.”

With ‘Salmon-Safe’ certification the airport has, in fact, achieved two of its environmental targets ahead of schedule – improving water quality and enhancing the habitat for Pacific salmon. 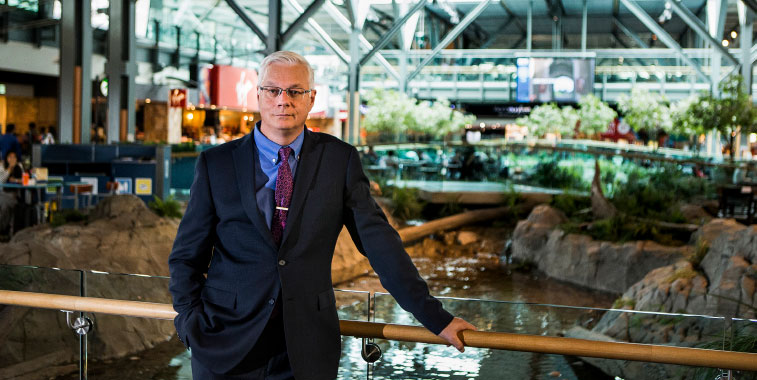 Craig Richmond, President & CEO, Vancouver Airport Authority, recently received ACI North America’s new Excellence in Visionary Leadership Award, in recognition of his vision of the future of security and overall airport operations. “It is a very nice recognition and I take it on behalf of the team,” he commented.

“We have had an amazing year of growth – almost two million more passengers, two new airlines and many destinations,” says Richmond. “We will always be interested in Asia, especially China, and we will welcome Beijing Capital Airlines on 30 December, which will make it our sixth Chinese carrier. That is a greater number of mainland Chinese carriers than any airport in North or South America, or Europe. So we are quite focused on Asia and China. But we are also growing very strongly in Europe and into the US and South America as well. We are not focused on any one area, and I think in the next year you will see a couple more carriers, with which we are negotiating.”

Looking ahead, maintaining excellent customer service while continuing to grow so rapidly is the airport’s main goal for the future. It is an area in which YVR has enjoyed notable success this year, having been voted Best Airport in North America in the 2016 Skytrax World Airport Awards for the seventh consecutive year, while it also recently received CAPA Centre for Aviation’s Airport of the Year Award 2016.

YVR expects at least another million passengers next year, with particular growth in the peak summer months, and is striving to focus on customer service and one-to-one interaction with travellers. “I think this is a fundamental issue which airports that are growing have to wrestle with, and we just have to keep trying and keep thinking of new ways to put people through the systems faster, and never lose that human touch,” Richmond concludes.