MEB3 presence at European airports: Near four-fold increase in a decade

The recent announcement from Lufthansa that it plans to end its Munich to Dubai service next April may put additional pressure on the European Commission to restrict market access to the Middle East Big 3 carriers (MEB3) namely Emirates, Etihad Airways and Qatar Airways, which the French and German governments allege operate with unfair subsidies (Emirates does not agree and has formally said so in letters to several governments).

But what nobody can dispute is the huge growth in MEB3 capacity to Europe in the last decade with all three carriers increasing their annual flights to Europe by 9-14,000 (or to 51,500 arriving flights to Europe combined in 2015).

Thanks to the increase in average aircraft size, the volume of annual arriving seats offered has risen by 360% from 3.6 million to 16.7 million. With its impressive fleet of A380s, Emirates is a widebody-only airline, increasing average aircraft size on European routes from 280 seats in 2005 to 400 in 2015. Indeed Emirates now offers 30% more seats on routes to Europe than Qatar Airways and Etihad Airways combined, with both of these airlines using a mix of narrow and widebodies, and only increasing their aircraft size by 35-40 seats. 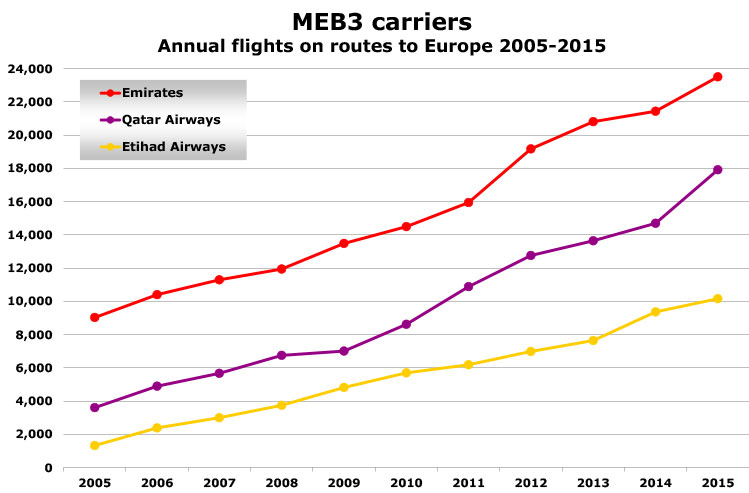 Last year Dubai was the third-busiest international route from the UK with 5.2 million passengers (compared to Amsterdam, 8.2 million, and Dublin, 7.8 million). Doha and Abu Dhabi are far down the field in 41st and 52nd place with only just over one million annual passengers.

The UK is the biggest MEB3 European market with 88% more seats offered in 2015 than Germany. Aside from the UK, where there are 2.6 million more seats than a decade ago, in Germany, Italy and France the rate of growth has been remarkably even, ranging from 1.2-1.7 million new one-way seats. 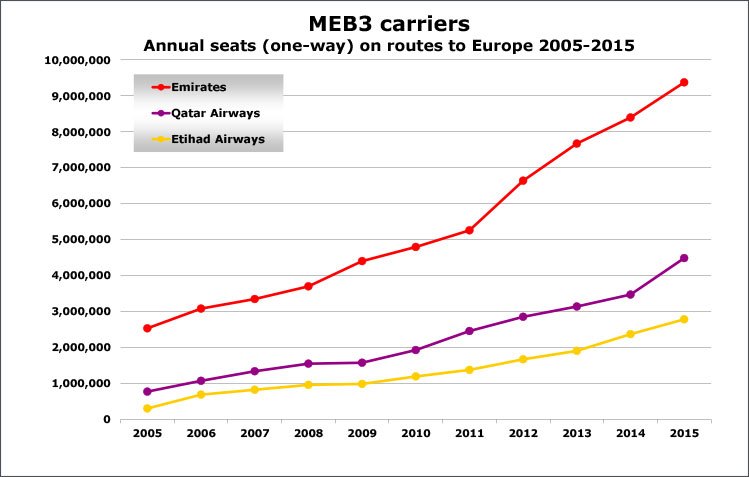 The pace of route growth among the MEB3 shows no sign of slowing. But while 48 airports are served across 28 countries, many EU member states are not served – there are no flights to Estonia, Finland, Latvia, Lithuania, Luxembourg, Slovakia or Slovenia. However, Norwegian has begun competing with Finnair on Helsinki-Dubai services, suggesting that Emirates will soon follow.
It is worth noting that flydubai, the Dubai-based LCC which, like Emirates, is owned by the UAE Government, also operates to a growing number of destinations in Europe. These currently number 22, with all of them in either Central or Eastern Europe. Among EU countries Bratislava, Bucharest, Prague, Sofia and Zagreb are served. Using only 737-800s the airline’s longest sector to Europe is Prague, at just over 4,400 kilometres. 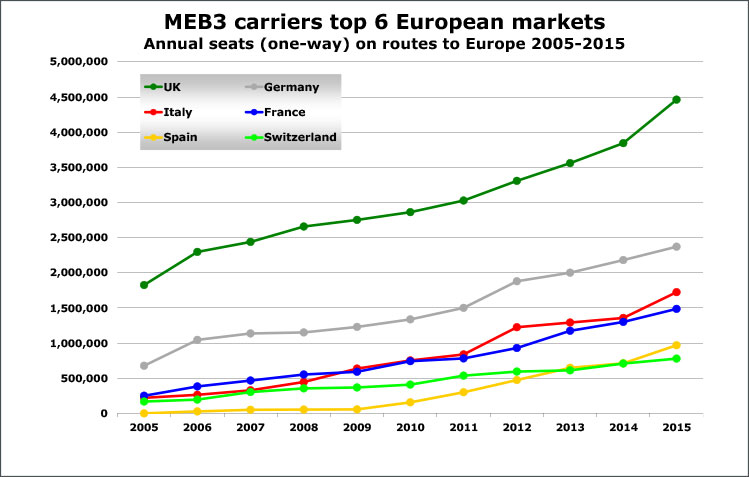 While the MEB3 carriers have been growing their European capacity each year, what about the European carriers serving the Abu Dhabi, Doha and Dubai markets? Analysis of scheduled capacity to these airports by airlines based in Europe for the last decade reveals that Dubai is by far the most popular airport with European airlines. However, since 2008 seat capacity to Dubai by these carriers has remained relatively stable and fell by 6% in 2015 to its lowest level since 2007. Conversely, capacity by Europe’s airlines to Abu Dhabi has grown steadily each year during the last decade, with a significant 24% growth in 2015. While Abu Dhabi has been working hard to attract more point-to-point traffic (and Etihad Airways has developed partnerships with a number of European airlines such as airberlin, Air Serbia and Alitalia), Doha has yet to emerge on the world stage as a significant destination in its own right. In 2015 only KLM, Lufthansa, Pegasus Airlines and Turkish Airlines among European carriers serve the Qatari capital non-stop from their home bases, with British Airways serving the market via Bahrain. 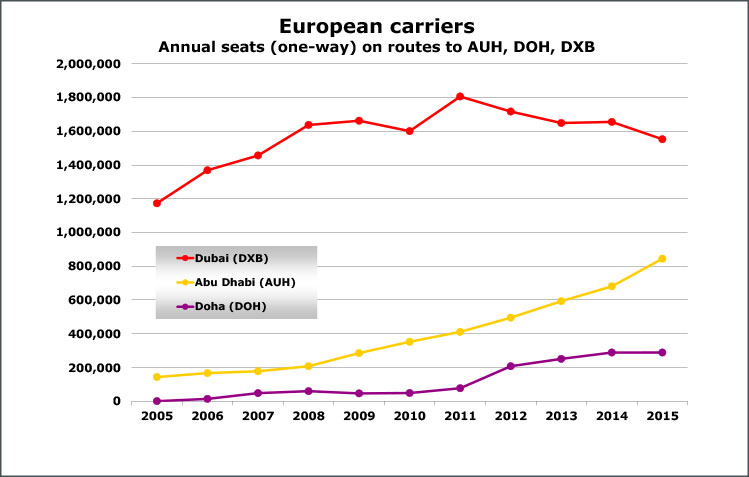