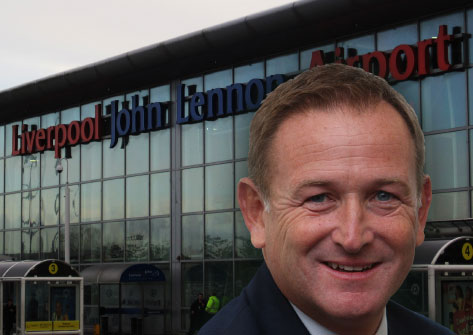 Premier league transfer: Andrew Cornish, the new CEO in charge at Liverpool John Lennon Airport is an aviation industry heavyweight who comes from Aer Lingus and previously served as Managing Director at Manchester Airport for five years: “My clear long-term objective is to get traffic up and to make profits.”

Peel Group, the private real estate, media, transport and infrastructure investment company which bought back the airport from Vantage Airports in April, has made a powerful appointment to engineer the turnaround in the form of Andrew Cornish who joins the airport with an impressive track record of experience in the aviation industry, having spent five years as Managing Director at Manchester Airport and, more recently, as Chief Customer and Brand Officer at Aer Lingus.

“My clear long term objective is to get traffic up and to make profits. But on arrival I decided that my first priority should be a personal assessment of safety and security – I could not pursue anything else without making sure that these fundamental matters are in good shape – and they are. There’s also no need for sweeping changes in the management team, nor the infrastructure or fabric of the airport,” Cornish told Airport Business.

But Cornish is aware of the structural challenge facing many UK regional airports – following the closure of Plymouth Airport in 2011, two more airports have closed this year, including Manston in Kent and Blackpool Airport in September, (just one hour north of Liverpool). So while he sets about the dual task of identifying more profitable route opportunities for airlines, combined with returning his own airport to viability, Cornish says that other factors beyond his airport’s immediate control will also need to be tackled by the airports community as a whole: “Air Passenger Duty (ADP) is a particular evil, a crude tax often representing the largest portion of consumer cost and one which also disproportionally disadvantages regional airports, especially those launching fragile, start-up routes.”

Despite these realities Cornish’s focus has now turned to “building relationships with airline customers and the local business community.” Within two weeks of starting his new job Cornish had his first face-to-face meeting with his largest customer, easyJet, and he has similarly engaged Ryanair. “Both of our largest customers seem very happy – but the fact remains that we have a number of geographies which are unserved or underserved – for instance businesses in the catchment have significant demand for connections to Germany. It’s clearly our job to provide the airlines with arguments to establish these links.”

As a result Cornish says he is “talking to a lot of airlines.” Indeed, following the withdrawal of KLM’s service to Amsterdam, the airport is in considerable need for a global hub connection again, from perhaps Air France, Lufthansa or even Turkish Airlines. Cornish says he is also “inevitably” talking to his recent former employer, Aer Lingus – the Irish national carrier does not serve the airport, yet Liverpool would be an obvious city from which to feed its re-emerging North Atlantic hub at Dublin.

These desires aside, there are recent successes to build upon. Romania’s Blue Air is growing its presence at Liverpool after announcing it will start a Bucharest route in December, with the subsequent announcement that it will begin operations to Bacau in March. “Bacau is close to the Moldovan border and we have a significant Moldovan community in Liverpool – this was a great example of how an airline has assessed its own assets and then looked at what we have to offer in a catchment of 1.5 million including the UK’s 5th largest city. Not all new routes need to be as creative as this – there’s a lot of other viable air service opportunities from Liverpool John Lennon Airport.