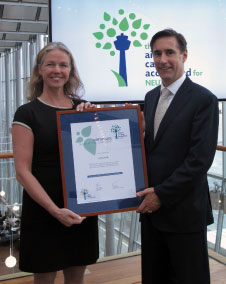 Scandinavia is renowned for its increasingly diverse and innovative ways of uniting nature and modern life. So, it should come as no surprise that Sweden’s national airport group Swedavia was among the early supporters of Airport Carbon Accreditation and that Stockholm-Arlanda was the first to become Airport Carbon Accredited at the ‘Neutrality’ level, the highest of 4 available levels of accreditation. That was back in the autumn of 2009, a few months after the programme was launched. Skip forward 3 years and Swedavia’s suite of 10 airports have now achieved the ultimate, setting the bar high, for other national airport groups to follow.

In becoming carbon neutral, Swedavia has led by example, championing a cause that few companies in any sector can match. Swedavia’s airports collectively welcome over 31 million passengers a year. In order to attain the ‘Neutrality’ certification within Airport Carbon Accreditation, they have had to reduce their own CO2 emissions, engage others at their airports to reduce their CO2 and finally, purchase carbon offsets for any remaining CO2 emissions under their control.

At a special seminar in the SkyCity facility at Stockholm-Arlanda on 10 October, there was debate, presentation and a humble celebration of what has been achieved. Morgan Foulkes, Director of Policy presented Airport Carbon Accreditation. This was followed by an enthusiastic speech by Swedavia’s dynamic CEO, Torborg Chetkovich. Sweden’s Minister for Environment, Lena Ek also participated and she gave a passionate speech about transport and the environment, while congratulating Swedavia on their extraordinary achievement. Following a lively questions & answers session, individual Airport Carbon Accredited ‘Neutrality’ certificates were presented to representatives of each of the 10 airports accredited: Stockholm-Arlanda, Göteborg-Landvetter, Stockholm-Bromma, Malmö, Lulea, Umea, Are Östersund, Visby, Ronneby and Kiruna.

Torborg Chetkovich was presented with an ‘exceptional achievement’ certificate for the Swedavia group.

In other Airport Carbon Accreditation-related news, it’s clear that lowering carbon emissions and seeking out efficiencies is not limited to Northern Europe. Antalya Airport became the very first Turkish Airport to reach the ‘Optimisation’ level, the highest level possible before purchasing carbon offsets. Another recently accredited at ‘Optimisation’ for the first time is Frankfurt Airport as well as Europe’s busiest airport, Heathrow which successfully renewed its own ‘Optimisation’ status for the second time. Istanbul Atatürk succeeded in reaching the ‘Reduction’ level, as did Ireland’s Shannon Airport. Meanwhile Dresden, Leipzig-Halle and Zagreb Airport all became accredited at the ‘Mapping’ level of the programme for the first time, alongside Budapest Airport renewing. Meanwhile, in Asia-Pacific, Hyderabad Airport has just become the 6th to be certified in the region, successfully Airport Carbon Accredited at the ‘Reduction’ level. Some 67 airports, welcoming over 53% of European passenger traffic each year, are now Airport Carbon Accredited. One year on from the programme’s extension to Asia-Pacific, 6 airports in Asia-Pacific are already accredited.

Chetkovich commented “Today’s achievement is an important acknowledgement that we operate resource efficient airports. At the end of the day, this means that we are able to make the most of our capacity as well as offering our customers more opportunities in order to develop airline connections to, from and within Sweden.”

Olivier Jankovec, Director General ACI EUROPE called it ‘a landmark moment’, commenting “Airports are complicated spaces, with many partners working together, but somebody has to lead. For an airport group the size of Swedavia to have achieved ‘Neutrality’ at each of its airports is no small feat. This is not just a major achievement within the airport industry. It is a substantial example of how an airport group can lead by example for other businesses beyond aviation.”

Other European airports which are Airport Carbon Accredited at the ‘Neutrality’ level include Avinor’s Oslo and Trondheim in Norway and Malpensa & Linate airports, operated by regional airport group SEA Milan Airports.