Helping high ambitions get off the ground 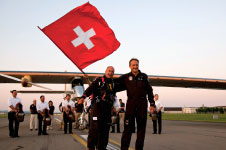 Solar Impulse is the innovative brainchild of Bertrand Piccard and Andre Borschberg with the ambitious goal of successfully undertaking a world-round trip in a solar powered aircraft, to highlight the power and usage of renewable energy. This project is of particular relevance today with the emphasis on efficiency in business across the global economy and for the need to protect the environment and the Earth’s natural resources. Solar Impulse also wants to show that exploration and active research can contribute to the use of renewable energies and to showcasing the importance of clean technologies, today and tomorrow.

The project was launched in 2003 with a feasibility study at the École Polytechnique Fédérale de Lausanne, Switzerland. In 2009, the first prototype flight occurred, which was a first in aviation history, whereby an aircraft of such large size and magnitude had consumed so little energy and had flown successfully. Today, following many unique achievements, Solar Impulse employs over 90 people, including engineers, technicians and mission controllers in Lausanne, Switzerland. The project is financed by a number of private companies, including Deutsche Bank, Omega SA, Solvay and Schindler.

ACI EUROPE has recently partnered with Solar Impulse and this collaboration provides mutual benefits for both parties. These include reinforcement of the project’s progressive environmental credentials, increasing the visibility of the aircraft’s journey and also facilitating meaningful contact with airports on operational aspects, such as landings, take-offs, and associated safety protocol, of the Solar Impulse flight itinerary in Europe.

According to ACI EUROPE Director General Olivier Jankovec, “Solar Impulse and ACI EUROPE are a natural fit. Our members are hard at work on some of the most ambitious carbon neutrality goals of the airport industry worldwide and through our carbon management certification programme, Airport Carbon Accreditation, a visible transformation is occurring on the ground. Meanwhile, in the air, Solar Impulse is providing genuine inspiration and visibility to aviation’s irrepressible spirit of innovation and its round-the-world flight is fuelling a global conversation about what aviation can achieve in the decades to come.”

At ACI Airport Exchange 2012, Piccard will be in attendance as a keynote speaker, where he will surely provide an informative and inspirational insight into this extraordinary project. To date, the Solar Impulse project has successfully visited the following European airports – Paris, Brussels, Madrid, Toulouse, Zürich, Geneva and Payerne. As part of its ongoing preparations for a world tour in 2014, Solar Impulse is currently studying the possibility of a 2013 United States coast-to-coast flight. After careful assessment of all the elements, a final decision is due to be announced by the end of 2012.