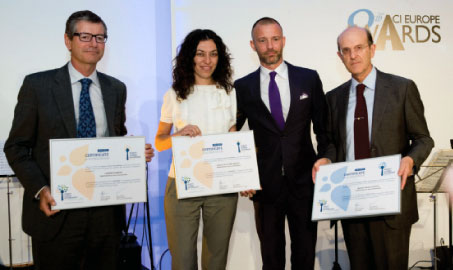 During ACI EUROPE’s 22nd Annual Congress in Madrid, three airports in the Aena Aeropuertos network were recognised for becoming Airport Carbon Accredited. Madrid-Barajas is accredited at the ‘Reduction’ level, and Barcelona El Prat and Lanzarote at the ‘Mapping’ level.

Over the past 4 years climate change has been a huge political priority, in parallel to the business priority of becoming more efficient, given the economic and financial turmoil which has occurred as well. That efficiency drive has been particularly evident in the airport business, where airport operators have been hard at work, looking to lower their CO2 emissions and become leaner by optimising their operations and in some cases, even becoming more energy independent.

The carbon management certification programme, Airport Carbon Accreditation has played a considerable role in driving and making some of these efforts more visible. And Year 3 saw several big announcements for the programme: ICAO giving its support to the programme, extension to Asia-Pacific and the moment the programme reached the ‘airports with 50% of European passenger traffic’ target. In fact, between July 2011 and June 2012, no less than 59 airports in 18 European countries succeeded (both renewals and new applicants) in becoming Airport Carbon Accredited at one of the 4 levels of the programme. These airports welcome over 52% of European passenger traffic each year.

In Europe specifically, airports which became Airport Carbon Accredited for the first time during Year 3 of the programme include Madrid-Barajas, Barcelona El Prat and Lanzarote, along with Dresden Airport, Leipzig Airport, Liege Airport and Warsaw Airport. Among the airports which successfully moved up a level within the programme during Year 3, were Bologna Airport, Eindhoven Airport, TAG Farnborough Airport and Helsinki Airport.

Some 10 European airports were accredited or renewed as carbon neutral, including 6 airports in Sweden, 2 airports in Norway and 2 airports in Italy. These airports have been recognised as having achieved a significant reduction in their carbon emissions, actively engaging other stakeholders to lower their respective emissions and finally, offsetting any of the remaining CO2 emissions that are under the airports’ direct control.

As the announcement of the Year 3 results, Declan Collier, President of ACI EUROPE and CEO of London City Airport said “Year Three of Airport Carbon Accreditation has really seen things move up a gear. More than half of Europe’s air passengers now travel through airports accredited by the programme. Accredited airports welcome over 780 million passengers each year and Year 3 has yielded a reduction of 414,128 t CO2. Couple this achievement with expansion to Asia-Pacific and success in gaining the support of ICAO and it’s clear that this programme has established itself as THE carbon management certification standard.”

Building on the programme’s extraordinary success over 3 years, early signs for Year 4 are already very good, with Paris CDG, Paris Orly and Antalya Airport in Turkey all having moved up a level to become Airport Carbon Accredited for ‘Optimisation’. Paris le Bourget has become accredited for ‘Reduction’ and Swedavia’s full suite of airports have applied for accreditation as carbon neutral (‘Neutrality’). Between now and June 2013, expect to see more airports becoming Airport Carbon Accredited at the higher levels of the programme, as they work smarter, strategising for increased efficiency and a genuinely reduced carbon footprint.

Work is also being done to catalogue the variety of ways that airports are reducing their CO2 and engaging others, but also to gather more data on how those efficiency gains bring good news to airports’ balance sheets too. However, the drive to lower CO2 emissions remains first and foremost an environmental priority for airports of all sizes.