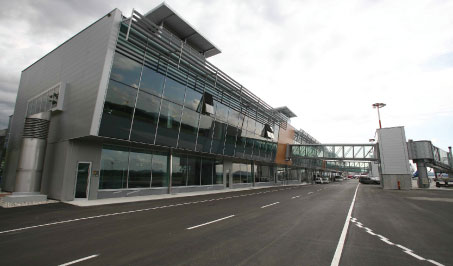 Following a pattern well-known in fellow new accession EU countries, Slovenia has experienced a great deal of change in recent years. The country, which has the highest GDP per capita in the new EU, has been enjoying dynamic economic development, as well as improved access to European markets. “We have been able to gain positive effects out of it,” explained Skobir. “Competition existed in the past, but only now can the airport benefit from it on an unbiased basis.” With growth reaching double-digit figures and dated facilities, it proved only natural for the airport to make extensive plans for the future. 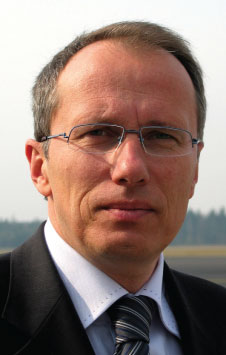 By early 2008, the most urgent investments were already commissioned and the airport gained a 1,300m taxiway extension, increasing its total length to 3,300m parallel to the runway, while the construction of two lanes connecting to the runway has nearly doubled its capacity to 25 hourly movements. In the face of increased traffic pressure, cargo handling equipment underwent modernisation and on the passenger side, a new terminal extension was opened. “The expansion of airport infrastructure is far from being over,” we were told by Skobir in 2008, who described airside and terminal improvements as “the first step towards Ljubljana’s goal of becoming the region’s leading airport in 2015.”
Notably, the master plan for Ljubljana’s expansion includes the construction of a new terminal facility, multi-modal logistics centre and airport rail link, clearly showing Ljubljana’s objectives. Based on pre-slowdown traffic projections, which envisaged 2.2 million yearly passengers by 2015, the plan’s key focus was on facilitating the growth and developing activities related to aviation and logistics. A new terminal, with a maximum hourly throughput of 1,700 passengers, was central to the project as it would provide Ljubljana with a significantly improved service offering. This key investment was initially scheduled to start in the second half of 2008 and carried a €60 million price tag, and would have eventually provided additional terminal capacity of 2.5 million passengers per year. “Diminished courage of airlines to open new routes that comes with high fuel prices and consolidation requires us to be more patient,” said Skobir, adding “Our basic plans stay the same, but major investments have now been postponed for about five years.” 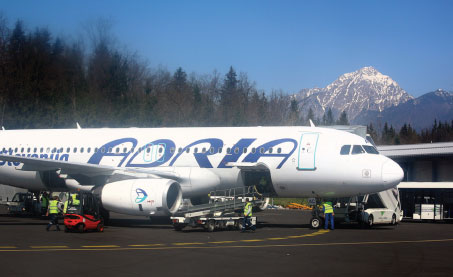 Adria Airways, Ljubljana’s largest customer, ended many unprofitable routes in 2011: “Domestic traffic is likely to decrease further in 2012, but foreign carriers are likely to drive traffic growth up,” commented Skobir.

In particular, the improved passenger amenities are increasingly vital, as airports in neighbouring countries, notably Klagenfurt, Graz, Zagreb and Treviso, compete for largely similar business. Skobir calls the competition inexorable, but is quick to say, that “only Zagreb’s profile and network are similar to that of Ljubljana, while the remaining facilities mainly serve domestic traffic needs”.
At the moment, only one low-cost carrier operates at Ljubljana, and many Slovenians choose the nearby airports, particularly so Italy’s Treviso, which has become a Ryanair base. “Offering preferential rates doesn’t seem fair towards other airline customers and generated profits wouldn’t justify cutting fares across the board either,” said Skobir, concluding: “As a privately held company, it is extremely hard for us to attract low-cost carriers, once the price factor is ruled out.” 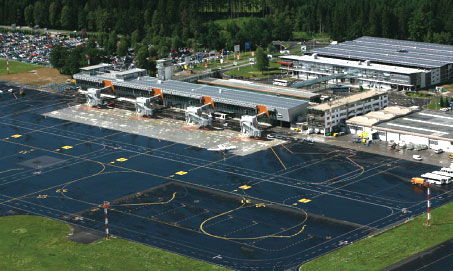 Cargo traffic is forecast to grow by +5.8% per year until 2017, while a new cargo terminal with corresponding infrastructure is planned for completion by 2014.

As far as planning is concerned, the instability of Adria Airways presents the airport management with a much higher uncertainty level, than the wider economic picture in the EU or the airport’s popularity with budget carriers. In fact, the airport’s year-on-year net profits increased by a quarter in 2011, and as Skobir explained, “This happened as a result of higher occupancy rates at foreign carriers and increasingly larger aircraft.” But the physical volume of traffic was down by 2%, owing mainly to the closures of Adria’s unprofitable lines in the last quarter of 2011.
Most recently, the go-ahead for investments was delayed due to Adria’s financial troubles. The future of Slovenia’s flag carrier and the airport’s largest user remains an issue, even though the airline was offered a government bailout during autumn 2011. A strategic investor is now being sought by the government, but the optimism has been somewhat diluted by Malev’s recent demise. The airport operator has measures ready for the worst-case scenario, but Skobir is unwilling to elaborate on details. He concluded that a potential receivership would require certain short-term crisis management, but the airport “would restore 70% of the turnover within six to 12 months. Airport development would not stop, but change in time and partly in content.”
In spite of the setbacks, all signs now indicate that construction of the second terminal will eventually start in 2012, provided tenders are completed successfully. The construction of a cargo apron is also scheduled for 2013, and will be followed by a cargo terminal at a later stage. With an increasing amount of revenue coming from cargo operations, the prospect of upgrading cargo handling facilities seems particularly attractive. Over time, that should lead to the opening of the only state-of-the-art intermodal-logistics centre within a radius of 500 miles, notwithstanding potential foreign investors becoming more cautious about large-scale investments following the financial turmoil of recent years. “It is not the kind of project Aerodrom Ljubljana could revive alone,” underlined Skobir, reassuring that “the company lays its hopes in the engagement of the new Slovenian government in these ambitious projects of national importance.”