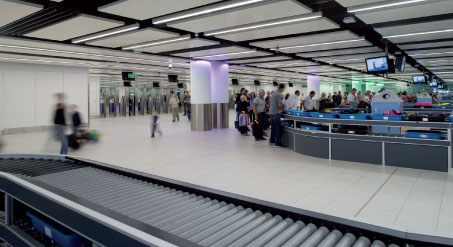 The £45 million investment in redeveloping the security search area in London Gatwick’s South Terminal came with a promise of ensuring that every passenger will be processed through security in no more than five minutes.

Comprising 19 lanes – 15 standard lanes, two for passengers who require assistance and two for premium passengers – the new product allows for 5,000 passengers to be processed per hour – a 25% increase in efficiency.

“The old security product was spread across three locations on two floors, so we’ve created a new single security area,” said Geoff Williams, Head of Security, Gatwick Airport. “An interesting statistic is that every second, a passenger will be leaving the security area and entering the departure lounge. The idea of passengers queuing for no more than five minutes fits in with our motto: ‘We hate queues’.” 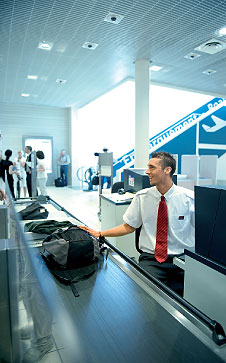 Knowledge and focus on aviation security

Securitas Aviation provides customised security services and solutions to airports, airlines, and airport-related customers.
Through individual national companies, Securitas is present at over 150 airports in Europe, North America, Latin America and Asia with a workforce of about 20,000 staff.
Its dedicated aviation and airport security employees are highly trained according to national, European and International regulations and receive specific training such as cargo security, dog security, documentation control, screening training and other task related training. The company’s aim is to raise awareness, to protect airport environments, airport staff and passengers.

An innovative aspect of the security product is the airport’s adoption of Iris at a Distance (IaaD) technology. The technology is known as MFlow Track and has been supplied by Human Recognition Systems in partnership with AOptix Technologies Inc. It is able to locate and capture the iris of the passenger, as opposed to the user having to stand in an exact location for the capture to be successfully completed, thus speeding up the process. All the passenger has to do is place their boarding pass on a reader and the gate opens within three seconds.

Rapiscan Systems is proud to announce that it has been awarded Best Innovator 2011/2012 for the Real Time Tomography (RTT) system at the UK Airport Operators Association Annual Conference.

The RTT is a high speed, next generation baggage screening detection system that enables airports to automatically inspect checked passenger baggage for explosives and other potential threats. Enabling airports to screen up to 1,800 bags per hour with high-resolution 3D images, it provides faster and more accurate bag screening than all currently installed hold baggage handling systems.

Rapiscan Systems will also be exhibiting at ACI Airport Exchange 2011, Abu Dhabi, 28-30 November, showcasing their Dual View Advanced Technology screening equipment. The 620DV is one of the most advanced checkpoint inspection systems in the world because it takes multiple views of a carry-on bag in the same time that it takes existing X-ray machines to show a single view, improving passenger throughput whilst also minimising hand searches by allowing cluttered bags to be cleared on screen. Rapiscan will also be providing an exclusive demonstration of the 3D images the award-winning RTT can provide to significantly improve the detection of potential threats.

Colour coding and screens displaying actual queuing times have also been implemented to simplify the security process as far as possible. Williams said: “The idea is to make the whole process more welcoming. We’re giving people a choice and they are able to avoid the longest queues if they’re in a hurry. Not all travellers are the same. 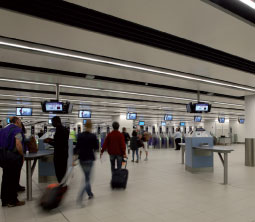 Williams: “We’re giving people a choice and they are able to avoid the longest queues if they’re in a hurry.”

“Having listened to our passengers and watched their behaviour in the security area, we have provided different services for families, PRMs (Passengers with Reduced Mobility) and others who might need some assistance, and we have created two special lanes just for those groups. This has also allowed us to speed up processing through the other lanes.”

Due to the ever-changing nature of airport security, Williams also explained that flexibility has been built into the new security product to ensure that London Gatwick is well positioned to react to any future developments.

“Extra cabling and space has been built in should we need to adopt new technology in the future,” he said. “The security process will continue to evolve and we’ll be able to respond very rapidly.”

For the passenger, however, the focus is not on the long-term security plans, but on the product that is offered now and while the aim to process all passengers within five minutes may appear optimistic, at present, the average passenger travelling from London Gatwick completes the security process in less than two minutes. 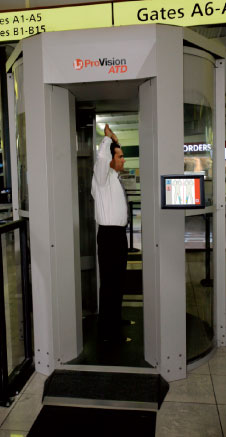 ProVision ATD does not use ionising radiation, such as X-rays, and is tens of thousands of times less powerful than other commercial radio frequency devices.

The TSA-approved ProVision ATD (Advanced Target Detection) quickly screens subjects to effectively reveal a broad range of concealed objects. These objects may be made of both metallic and non-metallic material, such as liquids, gels, plastics, metals, powders, very thin sheet explosives, bulk explosives and ceramics.After a passenger is scanned, advanced software processes the data directly. The system clears most passengers by displaying the letters “OK” on the operator’s LCD control panel. If a potential target is detected, an outline highlighting the area(s) of concern is placed on a generic mannequin that is displayed on the operator’s screen. Based on local regulatory requirements, the security staff can then perform a directed search to assess the situation. ProVision ATD’s patented millimeter-wave sensing technology uses safe radio waves. ProVision ATD does not use ionising radiation, such as X-rays, and is tens of thousands of times less powerful than other commercial radio frequency devices, such as cell phones and wireless handsets. ProVision ATD’s millimeter-wave technology has been extensively evaluated by regulators worldwide including the U.S. Food and Drug Administration, Health Canada and the Dutch Institute of Applied Science (TNO) and found to be completely safe.A quick two-second scan provides security personnel with data needed to confidently clear individuals through checkpoints. With less than ten seconds total processing time for a complete multidirectional view, the system processes 200 to 400 people per hour. Over 900 ProVision systems have been procured worldwide, and over two thirds of these are ProVision ATD systems.