SAVE to develop low-cost network at Charleroi

The main objective at BSCA is to achieve sustainable growth through the development of point-to point services throughout Europe, primarily by strengthening the Ryanair base and gradually increasing the number of low-cost carriers serving the airport.

BSCA celebrates its 20th anniversary this year. The airport has made much progress in those two decades, registering throughput of 5.2 million passengers in 2010 – a notable increase of +32% on the previous year. That success has continued into 2011, with the latest figures for February showing that BSCA handled 372,871 passengers – up an impressive +22% year-on-year. Already 11 new destinations have been announced for the summer season, including a Jetairfly service to Athens and a Wizz Air service to Belgrade. Ryanair accounts for the remaining nine new routes – to Volos, Thessaloniki, Rhodes, Perugia, Pescara, Lamezia, Kos, Almeria and Biarritz. Gering explained that “due to the current limited capacity of the airport, we intend to achieve controlled growth of 12-15% in 2011”.

The airport is currently building four additional gates, which will be operational in summer 2011 and will allow it to handle more aircraft simultaneously. “The accessibility of the airport, one of our key selling points, has also just been increased by an important upgrade of the two direct access roads,” said Gering. “By June, the brand new dynamic signalisation system is planned to be operational, and the former economy parking is currently being upgraded and modernised in order to cater for 2,500 additional parking spaces over the summer season.” 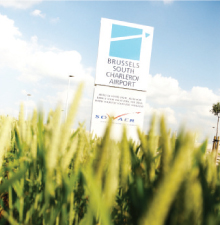 Figures for February show that BSCA handled 372,871 passengers – up an impressive +22% year-on-year. Already 11 new destinations have been announced for the summer season, including nine from Ryanair – to Volos, Thessaloniki, Rhodes, Perugia, Pescara, Lamezia, Kos, Almeria and Biarritz.

The SAVE consortium has the right to acquire a further 20.68% of BSCA’s share capital, and Marchi confirmed that it is interested in doing so. He explained that SAVE chose to acquire a shareholding in BSCA due to its dynamism as a regional airport and its potential for strong growth in the medium to long-term. “Our intention from the start has been to consolidate the position of the airport as a strategic gateway to a wide area that includes, in addition to the Walloon region, Belgium, Luxembourg, northern France, western and central Germany, and the Netherlands, and to use our experience to develop that potential,” said Marchi. “Our presence at BSCA allows us to express and develop our experience of managing a network that includes low-cost, charter and cargo flights, and short, medium and long-haul traffic.”

The main objective is to achieve sustainable growth through the development of point-to point services throughout Europe, primarily by strengthening the Ryanair base and gradually increasing the number of low-cost carriers serving the airport. A second target in the medium-term is to further develop charter services from the airport. “These objectives must necessarily be supported by a flexible and efficient management. The region will derive significant benefits in terms of wealth and job creation,” said Marchi.

SAVE will also utilise its airport master planning experience to ensure the progressive development of infrastructure at BSCA. Any developments will be undertaken with ongoing dialogue with the local community to ensure that the region’s mobility requirements correspond with environmental sustainability objectives. “In the medium to long-term, BSCA will undoubtedly become a leading low-cost destination in Europe. Passenger numbers will grow in parallel with enlargement of the network of services,” explained Marchi.

SAVE’s long-term strategy also includes the introduction of long-haul services, particularly to Asia and North America. “This is an achievable goal, which needs to be supported by market analysis and a visionary management strategy,” concluded Marchi.