The importance of bird strike prevention was highlighted in January last year when US Airways Flight 1549 from LaGuardia Airport to Charlotte/Douglas International made an emergency landing in the Hudson River after striking a flock of Canada geese shortly after take-off.

However, while this attracted a lot of interest in the public domain, for aviation as an industry, testing and adopting new techniques and technologies to minimise the risk of such incidents is a major part of everyday operations.

“For Fraport, airside risk prevention is of utmost importance,” Mauel said. “The airside safety is a top priority even for the management. I am responsible for the ICAO compliant airside infrastructure, which means continuously monitoring the three existing runways at Frankfurt Airport and all the taxiways, but also for the layout of our fourth runway in the northwest of the airport.

“With regard to the new runway, I am coordinating all requirements for the new bird detection system, Mivotherm, especially with our partners from German ATC (DFS).”

This innovative Mivotherm system consists of three stereo thermal camera systems, which will be installed at three different sites along the Main river. The cameras will detect bird flocks 2-4km away from the intersection area within the approach path of the new runway.

The system can identify the flock size and assess the potential safety impact for aircraft, while the flight altitude and speed of the flock can also be assessed. It then predicts its arrival time in the intersection area and if it is assessed as dangerous, a warning message will be automatically sent to the ATC tower.

“BAA has continuous bird patrols in operation at our airports, carried out by trained and competent staff suitably equipped for the task,” he explained. “They patrol the airfield, logging any bird activity and use various techniques to scare birds away from the airfield, seeking to maintain a bird-free environment.”

Among these techniques are the mobile patrols, which play recordings of distress calls for the species of birds that they can see and this is sometimes reinforced by the firing of a shell cracker in such a location as to ensure that the birds move away from the runway.

“More important, though,” he added, “is habitat management – managing the airfield grass and environment so as not to attract birds there in the first place.” 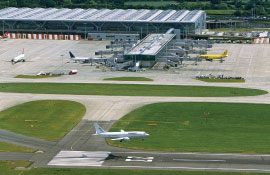 Witter: "BAA has continuous bird patrols in operation at our airports, carried out by trained and competent staff suitably equipped for the task."

Despite the stringent strategies that are already in place at both BAA and Fraport, Witter and Mauel explained that reviews are frequently undertaken to ensure that everything possible is being done to further minimise the risk.

“Reviews of our bird hazard management are carried out at least twice a year at each airport as we employ UK experts from the FERA Bird Management Unit to carry out standards checks on our whole process at each airport,” Witter explained. “We monitor results through monthly KPIs (Key Performance Indicators) that reflect the differing risks presented by bird strikes with different bird species. Internal audits are also undertaken.”

Referring to the reviewing of strategies at Frankfurt Airport, Mauel said: “Airside operation and bird strike management processes are reviewed continuously within Fraport. The chief of airside operations, the safety manager, the head of airside infrastructure and the bird strike prevention manager are working closely together to encounter any new identified hazard.”

As well as bird strike prevention, airside operations at Fraport and BAA also focus heavily on reducing the risk of runway incursions. At Frankfurt Airport, Fraport recently finished a project to implement Runway Guard Lights at all intersections to the runway system, while all taxiways leading on to the runway are secured with stop-bars. 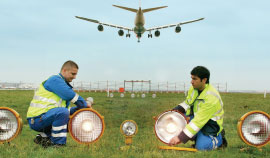 Mauel: "With regard to the new runway, I am coordinating all requirements for the new bird detection system, Mivotherm, especially with our partners from German ATC (DFS)."

Runway designation signs have also been installed at each side of the taxiway/runway intersections and DFS (German Air Traffic Control) also uses it’s A-SMGCS system, which has a runway incursion warning function.

Witter, meanwhile, who represents ACI EUROPE in EUROCONTROL’s Runway Safety Working Group, explained that “BAA has implemented many of the recommendations from the Action Plan for the prevention of runway incursions.” 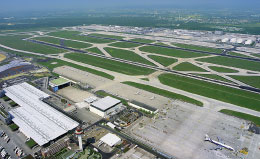 Fraport recently finished a project to implement Runway Guard Lights at all intersections to the runway system.

As EASA’s rulemaking capabilities continue to be extended, BAA and Fraport, along with various other airport operators, are deeply involved in the process to align airside regulations on a European-wide scale.

Referring to this, Witter said: “The current structure of regulations from ICAO and national CAAs (Civil Aviation Authorities) relating to airside operations will change throughout Europe as the detailed work of EASA on aerodrome regulation begins in earnest. I and others from ACI EUROPE are heavily involved in this and will play an active part in this over the coming years.”