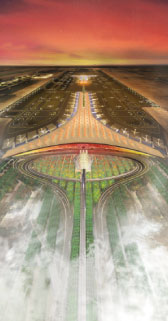 Ambitious developments: 97 new airports to be built in China in the next 12 years, bringing the total number to 244 airports by 2020 and ensuring that 82% of the population will live within 100km of an airport.

The facts are staggering. Having opened six months ahead of the Olympic Games, the €2.23 billion Terminal 3 was built in four years and is 250 times the size of Wembley Stadium (986,000sqm), with a two mile (3.2km) long terminal building, which boasts 84 retail shops, 175 escalators, 173 elevators and 300 check-in desks. With a current capacity of 43 million passengers (53 million by 2015), the unrivalled terminal building is the first to break the one million square metre mark. With the new terminal and third runway, China’s busiest airport will have the capacity to cater for up to 90 million passengers by 2012.

The culturally conscious terminal design was key to appropriately representing China’s growing profile on an international basis and especially for the forthcoming Olympics. “Terminal 3 is a gateway to Beijing. It communicates a unique sense of place, its dragon like form evoking traditional Chinese colours and symbols,” said Lord Foster, chairman and founder of Foster & Partners.

As the country’s first A380 capable terminal, Beijing’s Terminal 3 underscores China’s growing interest and involvement in the international aviation sector.

“If the A380 is going to have a good chance in any market, it’s China. Having an A380 capable terminal at Beijing Airport is a very important move for the nation and its development on both a national and international platform,” said Kjell Kloosterziel, manager of the master-planning department at NACO. 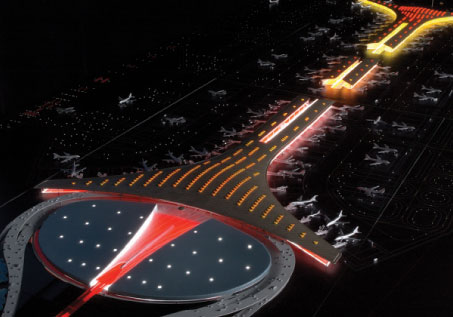 Chinese culture is signified within the terminal design as the glow of colours that outline the terminal’s distinctive silhouette are globally associated with China – yellow, orange and red.

China is fast becoming a powerful focal point in aviation. According to China’s People’s Daily newspaper, 97 new airports will be built in China over the next 12 years, bringing the total number of airports to 244 by 2020. At the end of 2006, the total was 147. It is expected that there will be 192 airports by 2010, which means that 82% of China’s population will live within 100km of an airport by 2020. With details yet to be confirmed, Beijing officials are now planning a second capital airport.

Goman Ho, director of Arup China, agrees: “In some ways, China used to be quite behind, but it is rapidly catching up with the international aviation community as a number of major gateways with increased retail and real estate developments are developed.” 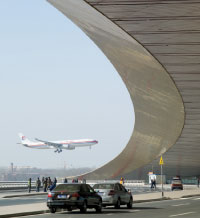 “When you arrive at the forecourt, you can immediately see through to the action of the runways. No matter where you are in the building, the relationship is there,” said Lord Foster.

A considerable undertaking, like Terminal 3, presents a number of hurdles, including overcoming cultural differences and sourcing suitable materials. Yet, the most significant challenge was the seemingly unreachable completion date. Arup, NACO and Foster & Partners, alongside others, followed a continuous working schedule, which involved globally based teams working in conjunction with the time differences.

“We literally worked round the clock. The team in Beijing would finish a long days work in time for the London office to begin their day, and so on. This schedule was necessary if we wanted to meet the tight time deadline, which when briefed with, we thought would be impossible,” said Ho.

Following decades of collaboration, the experienced trio cited their project history and regional experience as major benefits. “We understand the different teams and we all know what to expect and also what we have to deliver, as well as understanding the region, which saved a great deal of time overall,” added Ho.

The unprecedented size of Terminal 3 also brought with it economical blessings. “The size of the terminal meant that materials could be bought in bulk, which was cheaper. Plus, constructing such a development in China meant that there was cheap labour and a massive workforce was available, reaching 50,000 workers on site at peak times,” said Kloosterziel.

Despite the difficulties, the original design criteria prevailed, which can largely be accredited to architectural skill, said Kloosterziel. “It is crucial to incorporate functionality and flow within the terminal to ensure both passenger convenience and enjoyment. The functionality focus, such as the baggage and check-in points, and the passenger flow, which includes everything inside and outside the terminal, was absolutely crucial. What differentiates Foster & Partners from other architects is their ability to incorporate functionality into the design to make sure that the building works smoothly on all levels,” said Kloosterziel.

The iconic terminal has been designed as one of the most modern and passenger friendly super-hub facilities in the world. The terminal features intuitive layouts, minimal level changes and quick transfer times to ensure that passengers can easily understand the process with minimal confusion or frustration.

“Beijing moves the dialogue between scale and clarity to another level. The curve of its diagram reinforces the clarity of movement from landside to airside by drawing you through the building and offering panoramic views of the aircraft beyond,” said Lord Foster.

Resulting in significantly lower energy outgoings, the terminal is environmentally sustainable with south east orientated skylights integrated into the roof to enable the sun to warm the building on winter mornings and make the most of available daylight during normal operational times.

Poised to drive and support China’s growing economy in the coming decade, Lord Foster summarises the airport’s newest addition well. “Considering the size and capacity of this building, it is remarkable that it was commissioned and completed in a little over four years – less than the time it took to organise and conduct the public inquiry for Terminal 5 at Heathrow.”